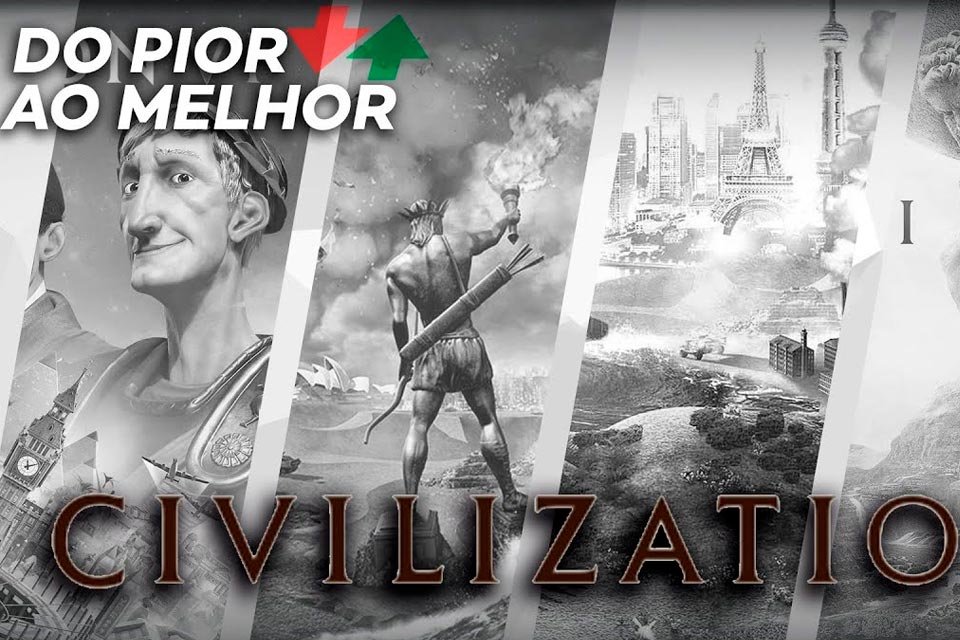 I think everyone has thought about what it would be like to run a city, a country or even the world, to lead through force or diplomacy, to develop an entire society based on your ideals. Considering we’re in 2021, it’s very difficult for that to actually happen.

Sid Meier then decided to create a space for you to not only apply all of this in practice, but also put several opponents in your path so that your competitive spirit works together for your thirst for progress. You asked and here’s the one from the worst to the best of the franchise Civilization. Here are our criteria, pay close attention:

Fourth, we have the last game in the franchise to date. Civilization VI, released in 2016, follows the same bases stipulated by the franchise since its foundation: 4X turn-based strategy with players and bots commanding world leaders with specific characteristics that compete with each other to win the match. There are many ways to be victorious, whether through progress or brute force.

Although its gameplay is very similar to its predecessor, Civilization V, it brings new features and changes such as a new graphics engine, limited amount of stacked units, new tech tree, more advanced cards and new schedules that influence player actions. In total, it has 18 civilizations in the base game, but it totals 54 considering its 4 expansions and extras.

For critics, the game brings new strategic opportunities, good changes in diplomacy, research and civility, several new nuances that make the winning conditions seem fairer and the classic formula has become even more robust, but the AI ​​has some problems as well as some issues in the user experience, as well as problems in explaining ideas such as Tourism. Your grade is 88.

Thirdly, the third game in the franchise. Civilization III, released in 2001, had no involvement from Sid Meier, who was the creator of the series. Unlike its predecessors, its focus is on building an empire, starting thousands of years before Christ and evolving with various modern technologies to the present day.

Among its novelties, the game brought small wonders of the world, which are less restrictive than the great wonders, and the cultural part, which is linked to the influence of each of the empires.

The game was criticized for being historically inaccurate and for containing several bugs in its release, as well as being described as poor in terms of gameplay by some, but the overwhelming majority of reviewers at the time loved the title, praising the many new features and its fun gameplay without ceasing to be profound. Your grade is 90.

And also in third place, we have Civilization V, released in 2010. The gameplay starts in prehistory and progresses to modern times, with the player being able to be better than their opponents in many different ways, such as diplomacy, science, economics or even military.

The title brought a new graphics engine, revised and improved combat, civilizations in 4 different levels, hexagonal instead of square bases, units with more precise movement, cooperation between civilizations to develop technologies, city-states and changes in the culture system, besides of other minor features.

Analysts praised the addictive gameplay, the new combat system, the gorgeous visuals, the classic music soundtrack, the automation systems and the excellent interface, but criticized for some multiplayer oddities and inconsistent and aggressive artificial intelligence. Your grade is 90.

Second, the game that started the entire franchise. Civilization, launched in 1991, was developed by MicroProse, a company founded by the main designers of that title: Bruce Shelley and the aforementioned Sid Meier. The player is in control of a human civilization and must evolve it in several areas in addition to making decisions that lead to alliances or wars.

The player starts by choosing a historical or current civilization that is just a cosmetic decision, as it only affects the names of cities and titles, unlike other games in the series. Beginning in 4000 BC, technological improvements take the player from the Bronze Age to the Space Age, in the futuristic year of 2100 AD

Analysts at the time praised the PC version a lot, saying that it revolutionized the genre, bringing unlimited strategies and gigantic fun to play, surpassing its rivals even without such beautiful graphics. The SNES version ended up disappointing a bit due to its unintuitive button configuration, stretched graphics and a complicated menu system, but it also received praise for its gameplay. With that, the game got 92.5 of note.

And first, another draw. We start with the continuation of the game mentioned above, Civilization II, released in 1996. As commented by one of the designs, Brian Reynolds, Meier’s involvement came down to ideas during pre-production, but only that.

The gameplay is very similar to its predecessor, bringing some differences in civilizations, wonders of the world and technology. Other relevant new additions are graphics changing from top-down to an isometric view, brand new units, a high council that can be consulted and two winning options.

It was described as one of the most balanced games ever made, with depth in combat, diplomatic relations and exchanges between player and computer. He constantly appears on lists of the best games of all time and his grade is 94.

And also first of all, we have Civilization IV, released in 2005. After the almost zero presence of Sid Meier in the development of the second and third main game of the series, the renowned designer took over the direction of this game, bringing several new features to the formula of the franchise.

It was acclaimed for new gameplay options, great visuals and menus, good strategic options without being overly complex and very addictive gameplay, but criticized for the fast pace that takes the focus out of historical context and for very long matches. Your grade is 94.