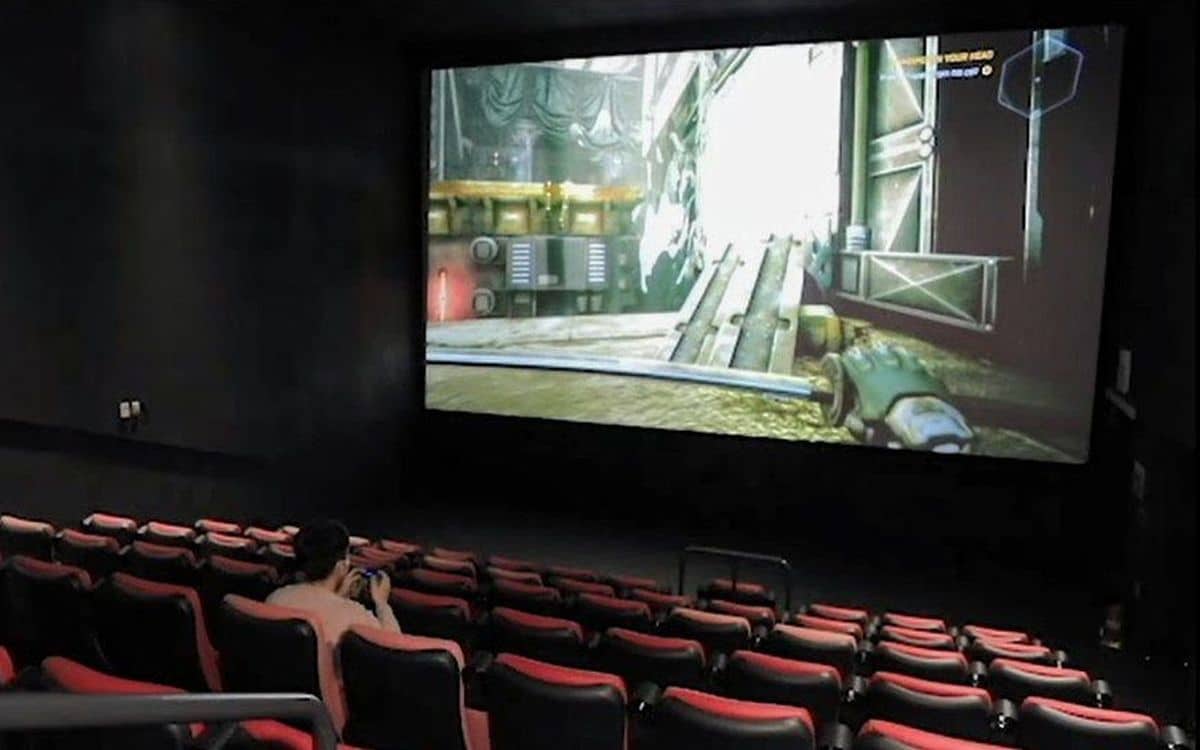 Movie theaters are suffering from the coronavirus pandemic. Unable to accommodate several hundred people at a time, some decided to improvise by allowing gamers to come and play while enjoying the big screen.

The film industry is very affected by the coronavirus and cinemas in particular. With restrictions all over the world, it’s impossible to host audiences to see the latest blockbuster in fashion (if there is any). So some chains try to innovate by offering very specific services. American and Korean theaters offer the possibility of renting their theaters … to play video game.

This amazing story is reported to us by the BBC. Who has never wanted to plug in their console in a movie theater to enjoy a huge screen and great sound? A perfect way to savor the latest AAAs, like Ghost of Tsushima, Cyberpunk 2077, or simply multiplayer games. This is possible in South Korea thanks to the CGV channel, which now offers this type of service.

It was a company employee, Seung Woo Han, who came up with the idea to rent entire rooms to play. He came up with the concept which was eventually applied across cinemas across the country. One way for the chain to stay afloat in these difficult times.

However, all parties must find their account, both the players and the channel. The price to pay to rent an entire room is therefore relatively high. As the BBC notes, a maximum of four people can rent a room for two hours at a price of about 90 dollars. This is the daytime rate, as after 6 p.m. it goes up to around $ 135. For comparison, a place in a CGV room to see a movie costs around 12 dollars. Of course, this does not cushion the shortfall, but it is already income. Note that the room does not provide the console or the controllers, the player only renting the screen. So you have to come with your PS5 or Xbox Series X and enough pads if several people want to enjoy it.

Since the service was launched at the start of the year, these are more than 130 sessions that have been reserved. As the BBC reports, average consumers are men in their 30s to 40s. Couples and families have also given in to the temptation.

It’s not just in South Korea that cinemas open to individuals or small groups to play. The American chain Malco Theaters, based in Memphis (Tennessee), also offers to rent its rooms in thirty-six establishments throughout the Midwest. Here, it will take $ 100 for two hours and $ 150 for three. However, the restrictions are less, since there are people who can use the room during this time.

This is again a fallback solution that is not sufficient to get into the costs. As Malco Channel Vice-President Karen Melton points out, room rentals are very popular, but by no means allow them to make a profit.

The film industry is taking the brunt of the Covid crisis and cinemas are not the only ones to suffer. The studios also had to improvise. Some have chosen to postpone their film indefinitely, like Sony with the next James Bond, while others have chosen streaming. This is the case of Disney with Mulan or Soul and especially of Warner Bros, which has announced that it will release all of its 2021 blockbusters directly on its HBO Max service. In France, cinemas are currently still closed until further notice.