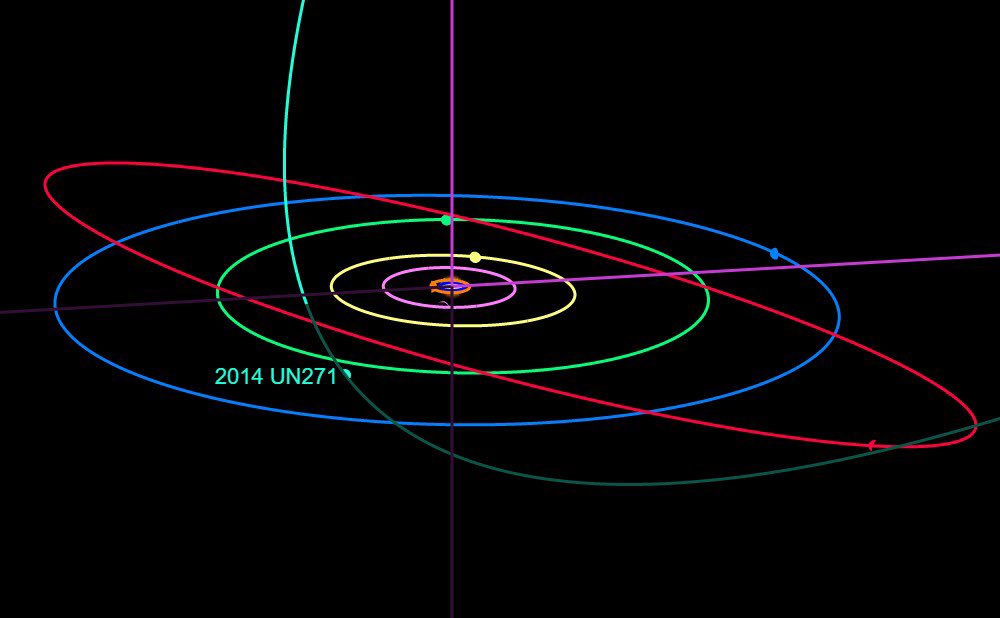 Pedro Bernardinelli, a Brazilian who recently completed his doctorate in the United States, was highlighted in the international press when he announced the discovery of comet C/2014 UN271.

Originating in the periphery of the solar system, the object may be the largest comet ever seen. Named Bernardinelli-Bernstein, in honor of the scientist and his advisor, it is estimated to be a thousand times more massive than a normal comet – making it possibly the largest ever discovered in modernity.

For Thiago Gonçalves, professor at UFRJ, the research shows the great potential of Brazilian astronomy. The possible comet is far away and will come no closer to Earth than the planet Saturn. In total, it is estimated to be 100 to 200 kilometers in diameter – about 10 times the diameter of most celestial bodies of this genus.

How was the comet found?

To find the comet, data from the Dark Energy Survey – DES (Dark Energy Survey), an international collaborative effort created to map hundreds of millions of galaxies, detect supernovae, and find patterns of cosmic structure in an attempt to reveal the nature of the mysterious dark energy that is accelerating the expansion of the planet. Universe.

DES began its research on August 31, 2013 and has since mapped 300 million galaxies across a 5,000 square degree area of ​​the night sky. During its six years of operation, the project also captured many comets and other objects that passed through the research field – and Bernardinelli created a methodology to discover these objects as a project for his doctorate.

Bernardinelli is a researcher at the University of Pennsylvania and, under the guidance of his professor Gary Bernstein, he analyzed six years of DES data, looking for thousands of astronomical images. The material is equivalent to 2000 years of work on an ordinary computer. They found Comet Bernardinelli-Bernstein hidden amid data collected by a 570-megapixel camera located on a telescope at the Cerro Tololo Inter-American Observatory (CTIO) in Chile.

Bernardinelli and Bernstein used between 15 and 20 million CPU hours at the National Center for Supercomputing Applications and the Fermi National Accelerator Laboratory – Fermilab, employing sophisticated identification and tracking algorithms to identify more than 800 trans-Neptunian objects (TNO) – frozen bodies of the our Solar System, which lie beyond the orbit of Neptune. They analyzed 80,000 exhibits and 32 belonged to a particular object, C/2014 UN271.

How the Bernardinelli-Bernstein Comet Behaves

Comets are icy objects that evaporate as they approach the sun’s heat. The DES images did not show a typical comet tail on the found celestial body. But a day after the announcement of their discovery, astronomers, using the Las Cumbres Observatory’s network, took new images of Comet Bernardinelli-Bernstein that revealed that it produced a coma in the past 3 years, officially making it a comet.

C/2014 UN271’s current journey into the Solar System began at a distance of more than 40,000 astronomical units (AU) from the Sun – 40,000 times farther from the Sun than Earth. This means that the comet originated in the Oort Cloud of objects, ejected during the early history of the Solar System. According to the DES press release, the comet may be the largest member of the Oort Cloud ever detected, and is the first to be detected so far.

“We’re privileged to have discovered perhaps the biggest comet ever seen — or, at least, bigger than any well-studied one — and we found it early enough for people to be able to watch its evolution as it approaches and heats up,” said Gary Bernstein . “He hasn’t visited the Solar System in over 3 million years,” he added.

Now, the comet will be intensively monitored by the astronomical community to understand its composition and origin. It is not yet known how active and bright it will be when it reaches perihelion. Bernardinelli said that a future Program of the NOIRLab “It will continuously measure Comet Bernardinelli-Bernstein to its perihelion in 2031, and will likely encounter many, many others like it,” allowing astronomers to characterize Oort Cloud objects in much greater detail.