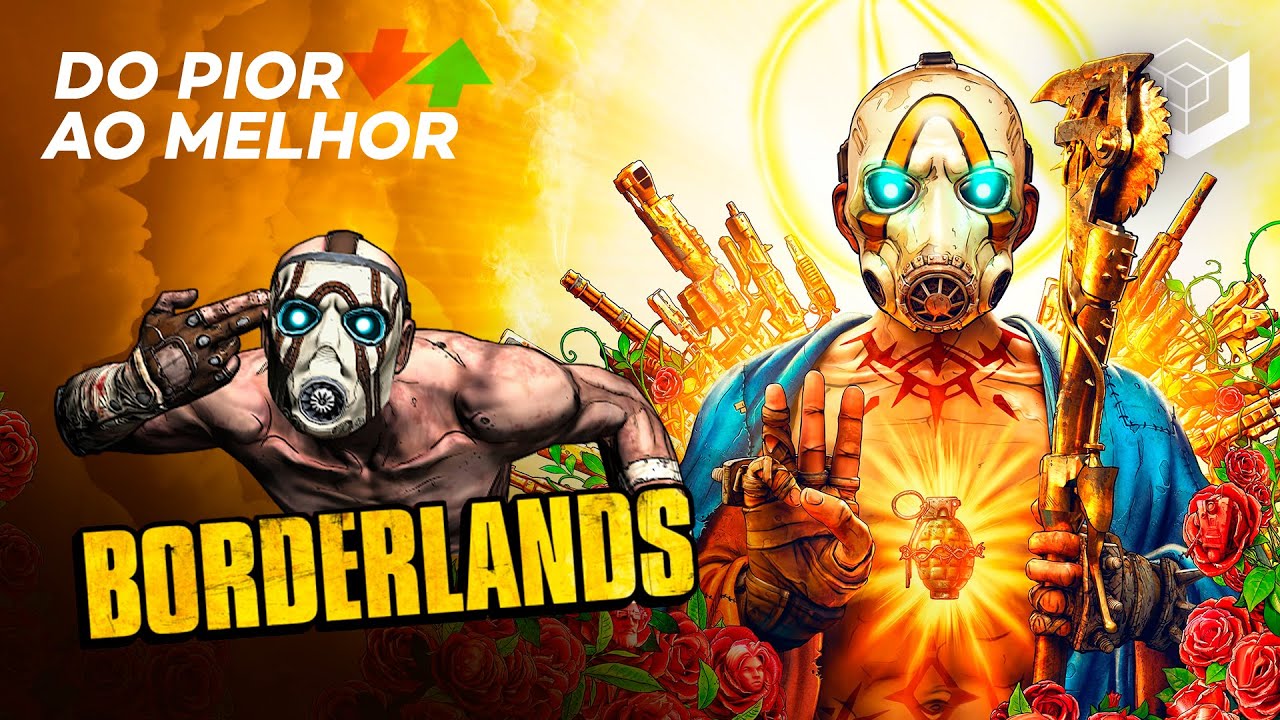 Run, shoot and loot. Today, a bunch of multiplayer games have this format for the fun generated by strafing everything on the way and making that beautiful politic when it comes to sharing the prizes. The series we are going to talk about today was the one that started with this format.

Gather three friends to finish the opponents and laugh without stopping? We like it and want it! You asked, voted and here’s the Worst to Best in the Borderlands franchise. Here are our criteria, pay close attention:

Last was the game that makes it very clear where your story fits in the chronology. Borderlands: The Pre-Sequel, released in 2014, takes place between the first and second games in the series and follows a group of Vault Hunters who are looking for a safe located on Elpis, a moon from the chaotic planet Pandora. Now, do you know who sent the offer to them? A young Hyperion programmer named Jack. That’s it, the same Jack who would turn into Handsome Jack, the great villain of the second game.

Like almost all other games in the franchise, the player has the option to choose one of the four characters available, each with a different class and skills. They are: Athena “the Gladiator”, Nisha “the Lawbringer”, Claptrap “the Fragtrap” and Wilhelm “the Enforcer”. Two other characters were added via DLC, which are Jack “the Doppelganger” and Aurelia “the Baroness”.

Much of the gameplay of the title is similar to that of its predecessor, but with extras such as laser weapons, items that generate cryogenic effects, low gravity environments, oxygen kits due to external exploration on site, a new grinding machine that combines different weapons to generate a stronger and two new types of vehicles.

Analysts praised combat and exploration in low gravity, the beauty of the environments, the new weapon options and the new playable characters, including the Claptrap, but they criticized some extremely tedious missions, the story that fails at times, the repetition of some areas and the disappointing ending. Your grade is 75.3.

And now for the first game in the franchise. Borderlands, launched in 2009, accompanies a group of four Vault Hunters, the bounty hunters from that area of ​​the galaxy, who are after the Vault, a legend that many say contains alien technology and several priceless riches. Together, they explore the wild and chaotic Pandora, filled with aggressive animals and hostile humans, to get hints of where this treasure is.

The title brought the concept of shooting and looting, better known by the English term Looter Shooter, since basically all enemies drop something, such as money and weapons, and the environment is full of items to be collected. In addition to completing the main missions, the player must complete side missions to level up and find out more about the plot. The game can be played on up to 4 players online or over LAN, bringing back that vibe of gathering friends in a home, each with their computer, to spend the night playing and laughing.

The four protagonists available for the player to choose from are Mordecai “the Hunter”, Lilith “the Siren”, Roland “the Soldier” and Bick “the Berserker”. All of them, especially Lilith, end up becoming important figures in the following titles in the series. The game received 4 DLCs, but none that added new playable characters.

He was praised for the satisfying gameplay of rampant shooting, the amount of weapons and items, the unique and fun characters, the distinctive artistic style and the great reward system, but criticized for the connection problems at launch, for the slow solo mode, for the climax not at all satisfactory and by the dull loot sharing system. He took home 82.6 of note.

Third, we have the most recent game on the list. Borderlands 3 was released in 2019 and is set seven years after the end of the second game in the series. With the discovery that Pandora has several Safes and the absence of Jack, the Calypso twins, leaders of the Children of the Vault group, emerged to pursue the Great Vault. Lilith, playable character from the first game, then creates a resistance to stop these evildoers and recruits new Vault Hunters.

These new Vault Hunter are Flak “the Beastmaster”, Moze “the Gunner”, Amara “the Siren” and Zane “the Operative”. An interesting fact is that, excluding the Pre-Sequel, there is a Siren character in each of the games, being the only class that repeats itself. The game is still receiving DLCs, but to date, no new Vault Hunter has been added by these packages.

Among the novelties in the gameplay we have the introduction of weapons with radiation in exchange for the removal of weapons with slag, a very large amount of armaments, since they are generated in a procedural way, adding covers and slides in races, a hub between the missions called Sanctuary III and integration with Twitch.

For analysts, the story works as a satisfying ending for the franchise, it encourages different styles of gameplay due to the adversaries and unique environments, the four new characters have many customization options in their skill trees and he gives greater importance to the brand weapons, requiring a strategic assembly of its arsenal. At the same time, some bosses are bullet sponges, which takes some of the fun out of combat, and the Calypsos are pretty weak considering they are the main villains. In fact, one of the critics said that this is the best and worst game in the series. His grade is 83.

Second, we have the most different game in the series. Tales from the Borderlands, released in 2014, was developed by Telltale Games, is divided into 5 episodes and follows the characters Rhys, a Hyperion employee, and Fiona, a heavy-handed crook, who must work together to find a Safe on the planet Pandora. As if their relationship wasn’t complicated enough, inside Rhys’s head is an IA version of Handsome Jack, who seems to want to help us, but we can’t be sure about that.

The gameplay is very similar to other company games, with the player having to explore the environments to solve puzzles and making decisions that will affect both the relationship of the characters and the development of the plot. Several moments the story separates the two protagonists and the player must follow the perspective of each one of that specific moment.

While Rhys has a cybernetic eye capable of scanning items and environments, Fiona uses a pistol that can deal elemental damage. There is a loot system, as in other games, in which it is possible to collect money and spend it at certain times. In addition to the dialogue trees, there are also some quick time events that must be performed correctly in order to progress in the plot.

The title as a whole was well praised for the captivating characters, the fun script, the emotional charge, the narrative creativity and the loyalty to the franchise, but criticized for being attached to the same engine as the other games of the company and not bringing great news in the gameplay . Using the full version note, with the 5 chapters, he got 86.3 of note.

And in the first place, the game that popularized the franchise once and for all in the world of games. Borderlands 2, released in 2012, accompanies a group of Vault Hunter that joins the Crimson Raiders, a resistance group that strongly fights the tyrant Handsome Jack. The battle between the two groups is over the powerful Vault that can change Pandora’s whole course.

The characters available in the game are Axton “the Commando”, Maya “the Siren”, Salvador “the Gunzerker” and Zer0 “the Assassin”. As with Pre-Sequel, the game contains two classes released in DLCs, which are Gaige “the Mechromancer” and Krieg “the Psycho”.

The game expands the entire Pandora map, brings new types of weapons and enemies, a script 7 times larger than its predecessor, more secondary missions and introduces the Badass Rank, which is based on the challenges within each mission. In total, the game received 4 DLCs that add new missions, enemies and challenges, and all are included in the Game of the Year version.

The game was a complete and absolute sales success, being the second best-selling game in the US in the month of its release. By 2015, the game had sold more than 12 million units and, according to Take-Two, 20 million were shipped worldwide.

The title was praised for the great story, the loots and the other reward systems, the interesting skill trees, the unique artistic style and the rich and inviting world, but some voice messages interrupt each other and most of the characters’ skills do not directly affect the shootings. He took the gold medal and got a score of 89.6.