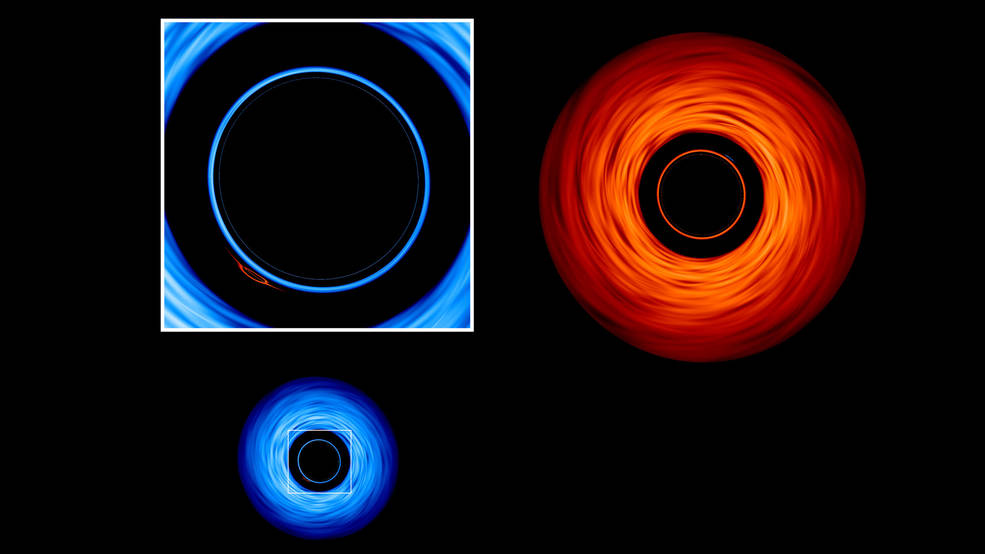 What happens when two supermassive black holes approach? According to NASA, they dance together in mesmerizing steps. The results of a computer simulation done by researchers at the agency are surprising. According to the model, presented to the world on April 15, the irresistible force of extreme gravity curves and distorts the light from the glowing rings of superheated gas that circulate the black holes of the simulated binary system – and the dance can last for thousands of years.

To create the simulation, researcher Jeremy Schnittman, an astrophysicist at the Goddard Space Flight Center (NASA Goddard Space Flight Center – GSFC) in Greenbelt, Maryland, United States, computed how the light produced on the accretion disk – a extremely hot gas ring surrounding the black hole – it would curl around each other’s warped space-time fabric. He calculated frame-by-frame movements in one day, using Discover, a supercomputer from the GSFC Climate Simulation Center.

The animation shows two black holes: the larger of the two, which is approximately 200 million times the mass of our sun, is surrounded by red rings of extremely hot gas (the accretion disk). Orbiting this giant is a second black hole, weighing approximately half its mass, with rings of gas and dust illustrated in blue.

Powerful gravitational forces pull and deform the structure of space-time as one black hole orbits the other, doubling the light from the partner’s accretion disks in cosmic dance. The closer you get to one of them in the simulation, the more contorted the other gets. “When looking closely at each black hole, multiple distorted images of the partner are revealed” explains Schnittman in the statement.

Visualization begins with a top view of the smallest black hole orbiting the largest. At first, neither seems very affected by the proximity of the other, but this changes dramatically when the point of view changes to the orbital plane: now, when a black hole passes in front of the other, the light from the object behind it twitches and wind it up to follow the gravitational distortion. The colors of the visualization are artistic choices, since accretion discs in supermassive black holes should emit light in the ultraviolet range of the spectrum. In the least massive black hole – the blue – the gas in the disk would burn a little hotter than in the heaviest, according to the NASA report.

Releasing energy in an infinite dance

The gravitational pull at the center of the black hole is so overwhelming that not only can light escape. At its core is a dark region of infinite density known as singularity, bounded by the event horizon of the black hole – also known as the “point of no return”. Immediately outside the event horizon, gravity bends photons in a curve known as a photon sphere. Rotating around this sphere are the superheated gas and dust accretion disks, swirling at extremely high speeds and releasing electromagnetic radiation, such as x-rays, radio waves, microwaves and gamma rays.

Most large galaxies are believed to have a supermassive black hole at their center – millions or even billions of times more massive than our sun. The binary systems of these monstrous black holes arise from collisions of galaxies: most of the time black holes rotate together in a spiral so that only a fraction of the merged galaxies retain two orbiting black holes, as NASA reported in 2018.

In those systems where there are two supermassive black holes, the distortion of lights that appears to come out of an amusement park mirror house may persist for a long time, according to Schnittman says in the statement. “We believe that they are the type of binary black hole system in which both can hold accretion disks for thousands of years,” he concludes.