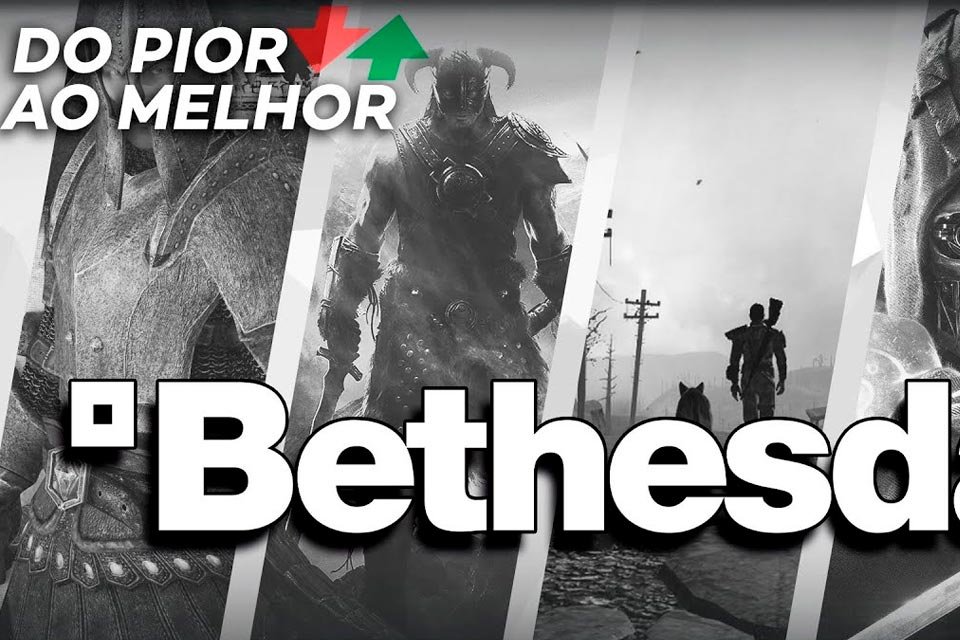 When we think of great Western RPG adventures, many stories come to mind, one more megalomaniacal than another. I guarantee you that at least two of those you thought of were developed and distributed by the company we’re going to talk about today.

Now, as part of Xbox Studios, there is only one certainty on the horizon: new versions of Skyrim hitting the market. You voted and here’s from Worst to Best Bethesda Special. Here are our criteria, pay close attention:

The Elder Scrolls III: Morrowind, released in 2002, was the first to reach consoles, coming out for both PC and Xbox. The story begins with the protagonist arriving on a slave ship and, after identifying himself, discovers that he was given freedom directly from the Emperor, but without knowing the reason for that.

Your map is smaller than the one in Daggerfall, but better designed, with better graphics and with a greater variety of cultures that inspire environments, such as the Egyptian and Japanese. An interesting curiosity is that the game has 300 books, not counting the spell scrolls. It was calculated that the texts of these books were equivalent to six novels of average size. They add more depth to the background of the universe and the game’s story.

Morrowind was a sales success, surpassing 4 million units sold in August 2005. Its graphics and the freedom it gave the player were praised by critics, as well as its night and day cycle and the weather that varies greatly. But, like many other games in the series, the number of bugs and glitches was huge, and this displeased journalists who had several problems during their games. Despite many problems, he managed to win the hearts of many new fans. Your grade is 88.

In 2012 it was released Dishonored, game developed by Arkane Studios that follows Corvo Attano, a bodyguard of Empress Jessamine Kaldwin who was accused of murdering her. Now he seeks revenge on those who set this up for him.

With a steampunk setting, the title is an FPS that combines combat with stealth to face enemies and advance the story. If you decide to go for violence, it will affect some missions, while acting on the sly will make you go unnoticed. In addition to using firearms and melee weapons, it is also possible to use spells to confront anyone who gets in your way.

The game was praised for all its creativity, its secret-filled environments, its incredible design, especially the city, and its spectacular cast, but ended up being criticized for its over-extensive story and problems with some controls. His grade is 89.3.

Fallout 3, released in 2008, was the first game in the series to be developed and published by Bethesda. Furthermore, it was in this title that 2D isometric graphics were replaced by 3D and that turn-based combat became real-time. The player can choose to view the action in first or third person, with a camera over the shoulder.

The story takes place in 2277 and the protagonist lived the first 19 years of his life inside nuclear shelter 101 with his father, James. When he turns 19, chaos breaks loose, his father flees the scene and our character is chased by security guards until he finally manages to get out. Now, in the middle of this devastated and chaotic world, the big objective is to find your father.

The game ended up introducing some new features such as VATS, a system that is one of the most important in the game’s combat, in which time freezes, you see the damage done to the enemy and choose parts to attack him. The development of the game started in 2004, but the company only started working on it in earnest after the completion of the game. Oblivion, in 2006. Bethesda worked to make the game very similar to its predecessors in terms of gameplay, story and black humor. The title was rated M for Maduro for dealing with adult themes, violence and depravity, common in the franchise.

As you can imagine, the game was a complete and utter success. Analysts praised the open world gameplay and flexibility in the character evolution system, as well as VATS, game realism and attention to detail. Some issues like plot recycling from predecessors and combat were scored, but the game ended up as the best of the series on our list with 91.3 rating.

Second, we have The Elder Scrolls IV: Oblivion. The title was released in 2006 and was developed much more like a console game than a computer game, different from its predecessors, going through a kind of simplification in gameplay in some aspects. The game’s name is related to portals that lead to a demonic place called Oblivion, which is the focus of the game’s main quest.

He left all the variety of cultures aside that the previous title had presented to return to the molds of medieval classics. Now, NPCs make choices because of the Radiant AI system, this to achieve certain goals. For example, if an NPC aims to get food, they might end up stealing it from others, if they get the chance.

It was so far the most successful game of the entire franchise, selling over 3 million copies in less than a year of release. Analysts loved it too, praising the NPCs’ graphics, world and programming. Some journalists commented that he was much better than Morrowind, drawing the attention even of those who aren’t fans of the genre and that discovering new places and environments became addictive, but they also said that it doesn’t have the freedom and vastness that previous games presented, that it was like a pillar of them. His grade was 93.6.

And first of all, The Elder Scrolls V: Skyrim, launched in 2011. It is already worth saying that it is the biggest success of the franchise in sales, with 30 million units sold in 5 years.

The main character is a Dragonborn, an individual who was born with a dragon’s soul and blood but with a mortal body. Speaking of which, dragons are spread all over the world of Skyrim and several times you will be surprised by one of them who will only be satisfied when they tear you to pieces. Instead of a world inspired by medieval classics, the universe is built with Norse culture as a base, which Viking fans greatly pleased.

The class system was abolished but, oddly enough, it was well received by the critics, who said that now players who would like to mold a balanced character could, in addition to focusing on the preferred style. Combat was not so well received, but the ability to use a weapon in one hand and a spell in the other was praised. And it’s full of glitches and bugs, some that actually hindered gameplay. Even so, Skyrim is a classic in the video game world and a must-have game for RPG fans. Your grade is 94.

Now let’s go to the worst

Launched in 2007, Star Trek: Conquest is both a turn-based and real-time strategy game set during a period when diplomacy is dead and most of the races in the universe are at war in order to achieve supremacy.

His entire proposal and game modes, such as Campaign and Skirmish, are minimally interesting, but he had a greater focus on hardcore strategy players than casual ones, even though it was released for the Nintendo Wii. In addition, at various times the characters’ actions go against what normally the characters in the Star Trek universe would do. Your grade is 51.5.

From one bad Star Trek game to another, Star Trek: Encounters was released in 2006 and was fourth on our worst list. Unlike the above, this one is a shoot ’em up that features spaceships and characters known to fans of the franchise.

For those who enjoy the saga, being able to fly with the ships is a pretty cool feeling, but the controls are bad, the missions are boring and frustrating, the little use of licenses in the series and the weak performance of William Shatner, the dear James T. Kirk. Your grade is 50.

The mid-2000s weren’t all that positive for Bethesda. Thirdly, we have Pirates of the Caribbean: The Legend of Jack Sparrow, released in 2006. The game takes place after the events of the first game and the player must explore the island, fight enemies and solve puzzles in an adventure style.

The fact that Johnny Depp played Captain Jack Sparrow in the game was well regarded, but the sword battles are bad and repetitive, the opponents aren’t challenging and the visuals are dated. This all earned him the 49th grade.

The Elder Scrolls: Blades was released for mobiles and Nintendo Switch in May 2020, is an action RPG and has a first-person view. Unlike the other games in the franchise, it doesn’t have an open world or gives you a freedom to explore the environment, being totally linear due to the limitations of cell phones.

It doesn’t allow the player to sneak in, so no stealing items or sneak attacks. Most likely it was created after the great success of Fallout Shelter, another game from developer Bethesda, and looking at the sales side, it did very well, with over 1 million downloads on iOS within a week of its early access launch.

Analysts criticized the loading screens, grinding, the lack of innovation and the use of microtransactions, but praised the visuals, character development, story and combat. Your grade is 43.

And we closed the list with this thing called Rogue Warrior, released in 2009. The title follows a navy veteran to carry out a mission in North Korea and the game is an FPS with tactical elements that must be used to assassinate opponents without attracting the attention of others.

But it manages to do it all wrong: it only has two hours of gameplay even when sold at full price, the dialogues mix languages, it’s totally linear and boring, the artificial intelligence sucks and its stealth mechanics are useless. With that, he takes first place with the wonderfully awful 28.