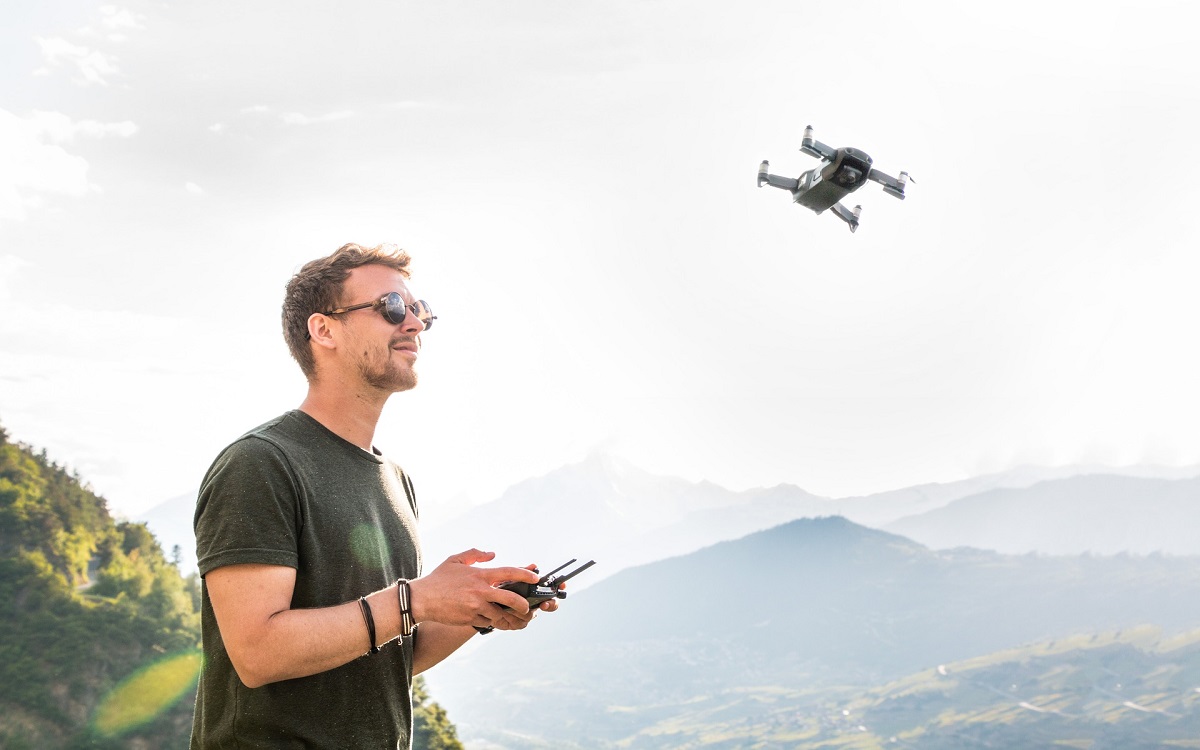 What is the best drone in 2021? A question which is difficult to answer, so many references are there. That said, to help you choose the one that best suits your needs and expectations, we’ve put together this buying guide.

Our selection of the best drones

The best drones for photo and video

First, we present to you the drones that we believe are the best on the market. We have classified them into two very distinct categories: the best drones for photo and video, generally intended for a more informed and knowledgeable audience, and the best drones for beginners, both for adults and children. Finally, we will end with some answers to questions that deal with the use of drones (framed by law) and the various criteria to be taken into account before making a purchase. 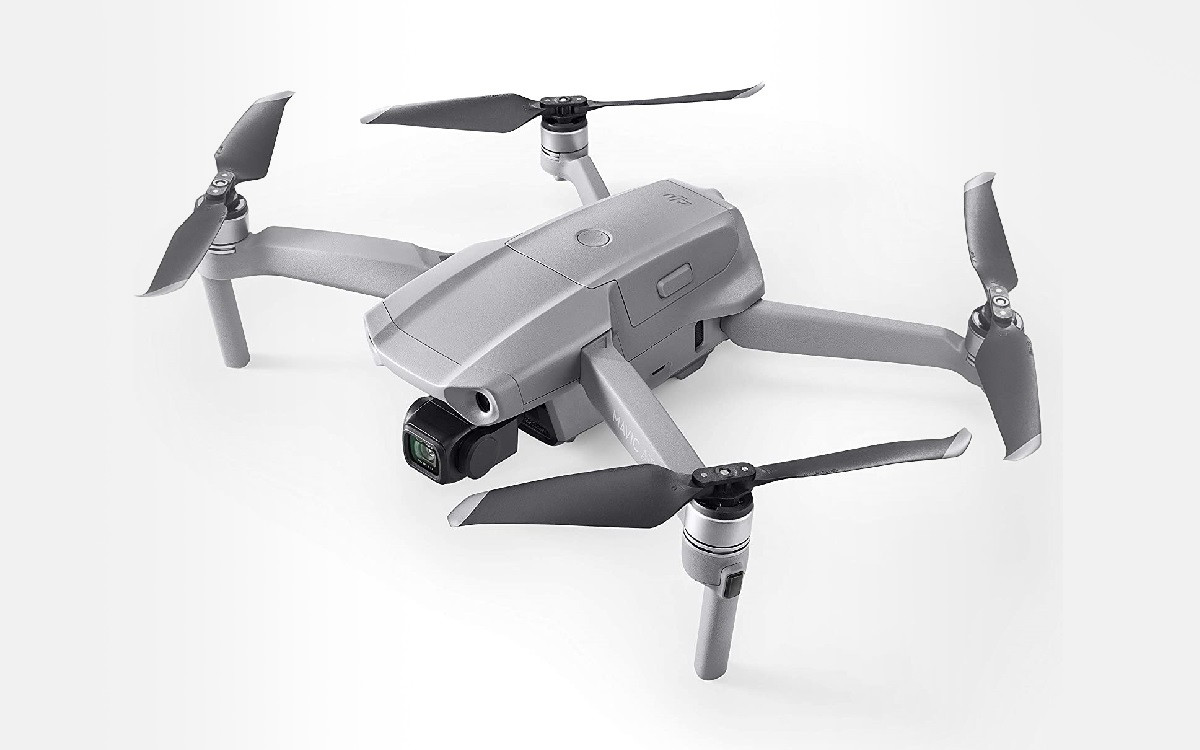 The DJI Mavic Air 2 is a very powerful drone that stands out from the other models in our comparison by its photo sensor. Indeed, the latter is able to capture videos in 4K 60FPS. Its autonomy is also one of its strong points since the Mavic Air 2 is able to fly for 34 minutes with a single charge of its battery. In addition, this drone has sensors at the front, rear and bottom capable of detecting obstacles in order to prevent accidents. 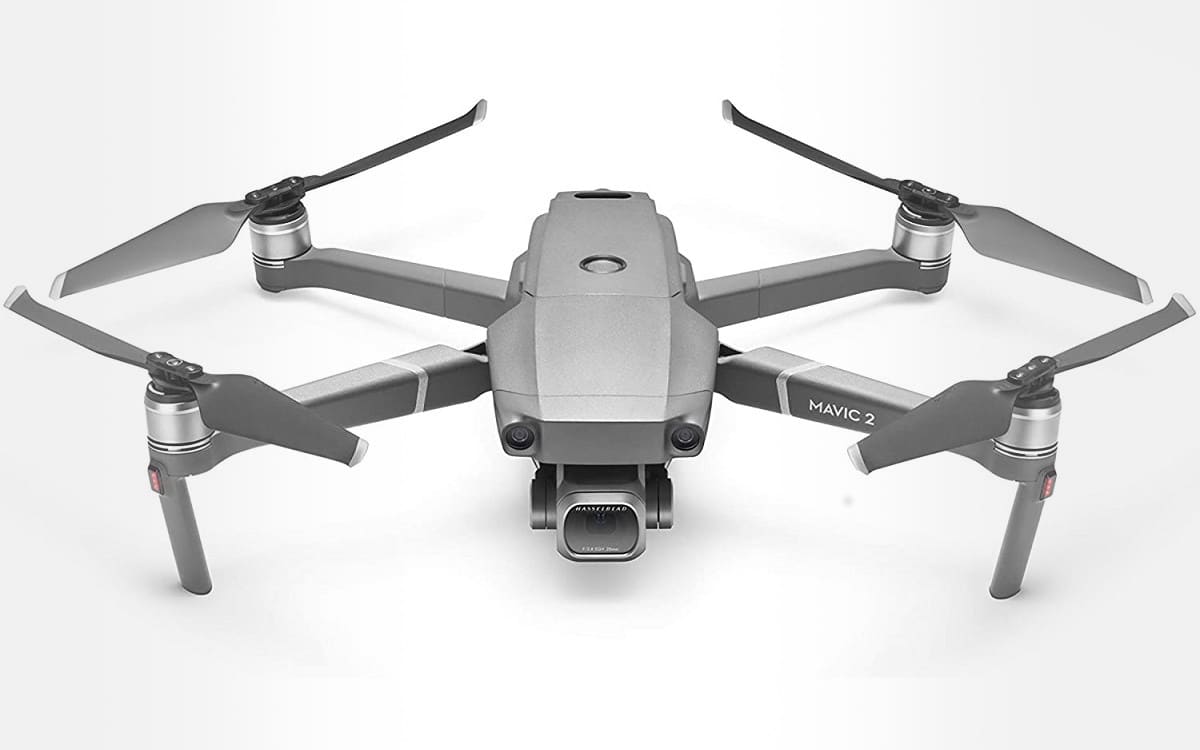 The Mavic 2 Pro is a high-end drone that will suit people who want an excellent flight experience in addition to beautiful photos and videos. In terms of technical characteristics, the Mavic 2 Pro is equipped with a Hasseblad f2.8-f11 variable aperture camera. The device also embeds several profiles for color but also HDR technology.

Also from the game, many piloting modes such as manual, circular, with defined waypoints and routes are available. In terms of performance, this drone will delight fans of speed since it is capable of reaching 70 km / in top speed. Finally, it offers a very comfortable battery life of 31 minutes. 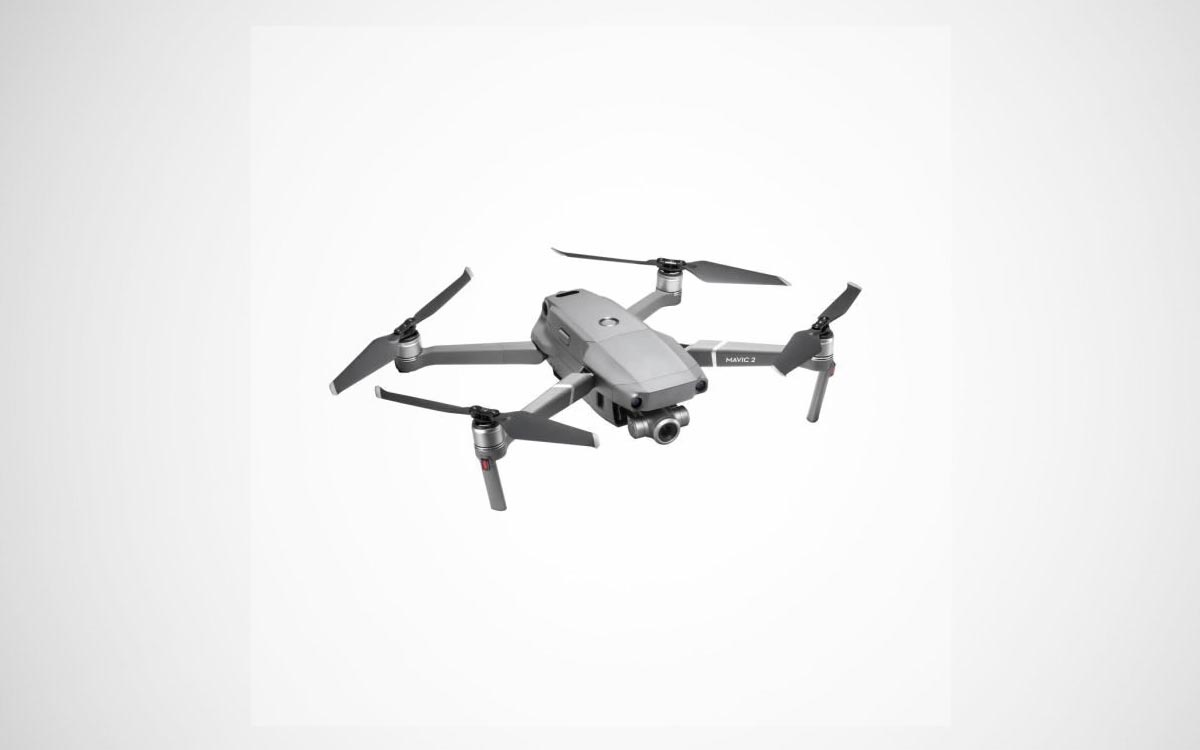 As its name suggests, the Mavic 2 Zoom stands out mainly on its magnification capabilities. It incorporates a sensor 1 / 2.3-inch 12 MP offering 2x optical zoom coupled with exceptional 4x digital zoom. This model is therefore ideally suited for people who want to capture photos and videos on distant subjects, without losing quality. 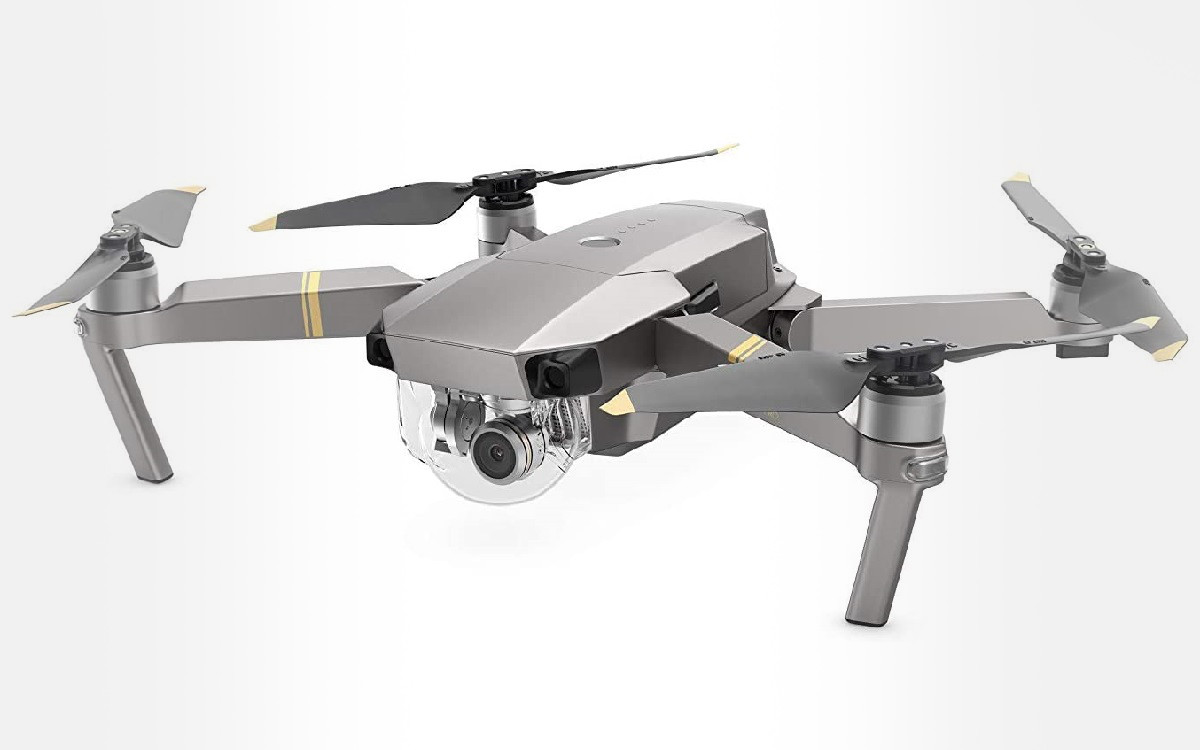 DJI’s Mavic Pro Platinium is also a high-end drone. The latter prides itself on offering a flight time of up to 30 minutes thanks to a high-capacity lithium-ion battery in addition to enjoying a noise reduction of 60%. 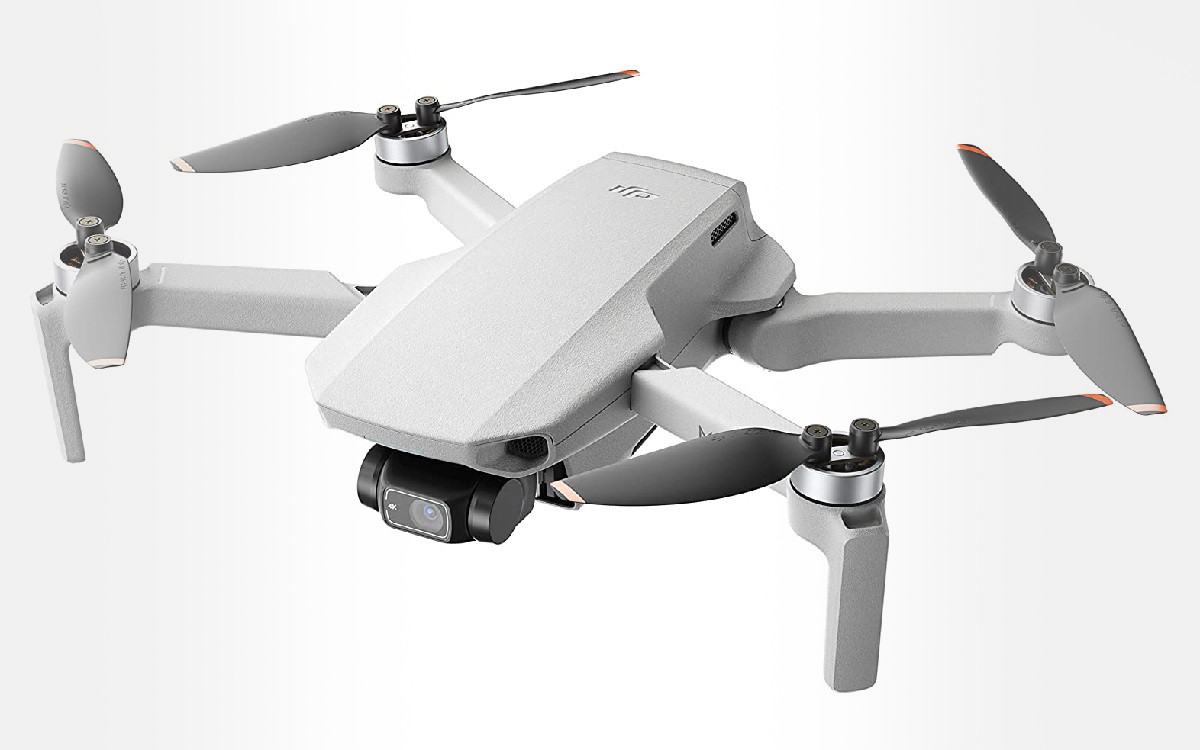 The Mini 2 as its name suggests is a very compact drone. The latter will be perfect for people looking for a powerful and easily transportable drone. About the size of a smartphone when folded, it weighs just 259 grams.

However, the technical characteristics are not left out. This little concentrate of technology indeed integrates a 4K camera and also has a vision sensor and a GPS. The drone hovers with great precision. Its battery allows it to fly for a period of 31 minutes, an autonomy that surpasses some professional drones.

Now that we have presented the main drones marketed by the Chinese manufacturer DJI, we offer you a small summary of their technical sheets. So you can have a quick overview of the different features they offer in order to direct you to the one that best suits your needs. 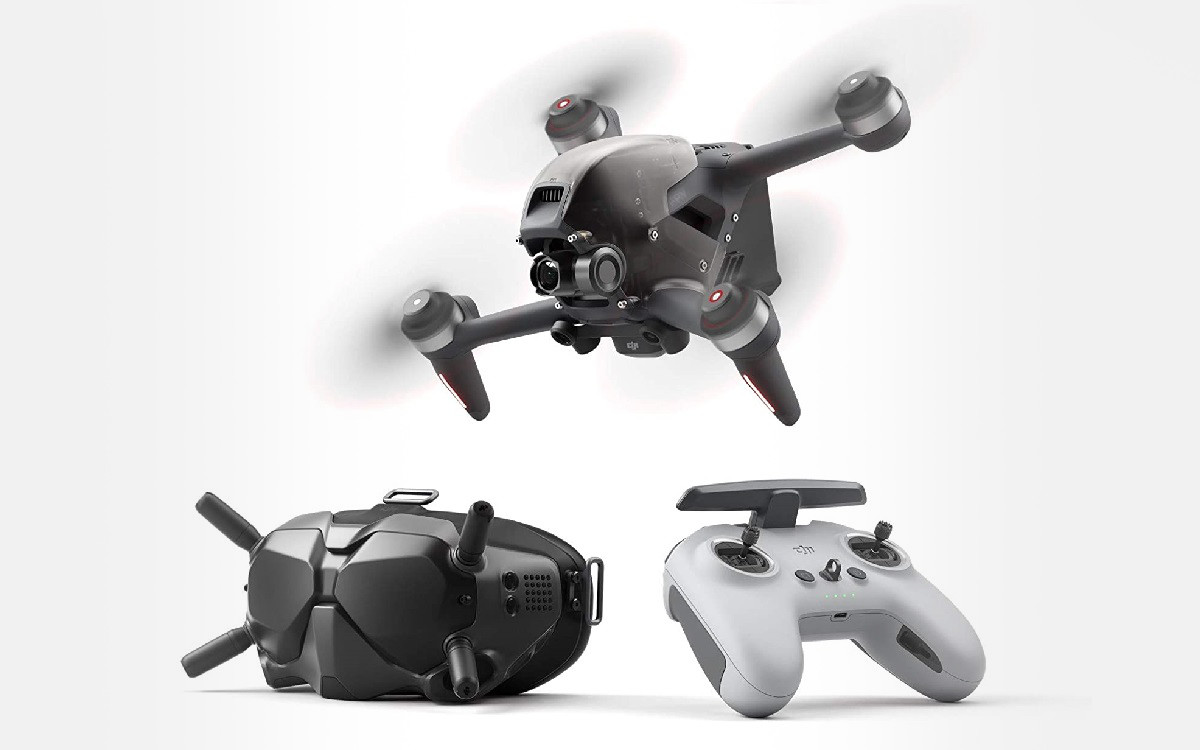 This DJI FPV model as the name suggests is a First View Person drone. It stands out from other DJI drone models because of its use which requires a DJI FPV V2 headset and the super wide 150º FOV of the DJI FPV, delivered with the latter. The DJI Virtual Flight app currently only supports iOS devices, but the DJI Fly app is compatible with iOS 11.0, Android 6.0 and later.

Like the DJI Mavic Air 2, the DJI FPV DJI FPV is capable of recording 4K / 60 fps video at up to 120 Mb / s, capturing the finest details, for videos as thrilling as flight. You also enjoy clear real-time video transmission at distances of up to 10 km. DJI FPV’s video transmission latency is less than 28m / s. 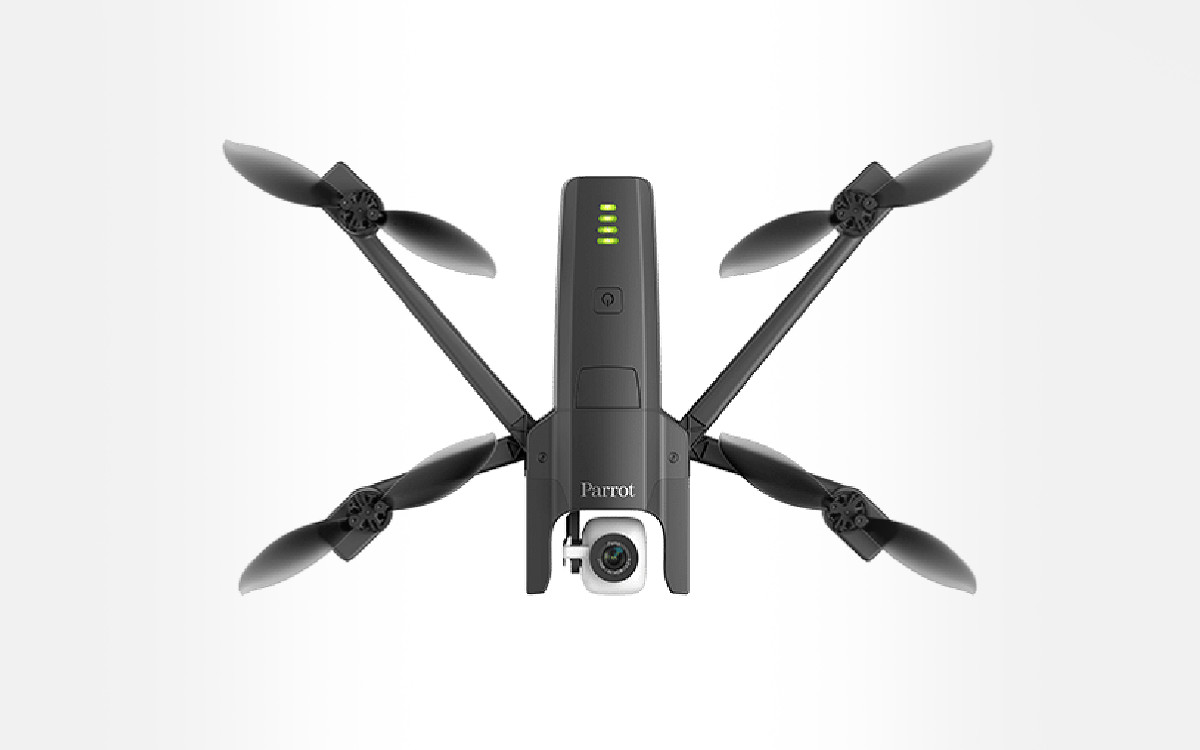 The Parrot Anafi, even though it was released in 2018, still represents an excellent alternative to DJI drones. The latter captures images in 4K and is equipped with an optical zoom of 2.8 X. The quadrocopter comes with a Skycontroller remote control. This version hardly has obstacle detection, unlike the rest of the range. However, it is no less efficient. The Sony IMX230 sensor and the Ambarella video processor take 21-megapixel photos.

The best drones for beginners and children 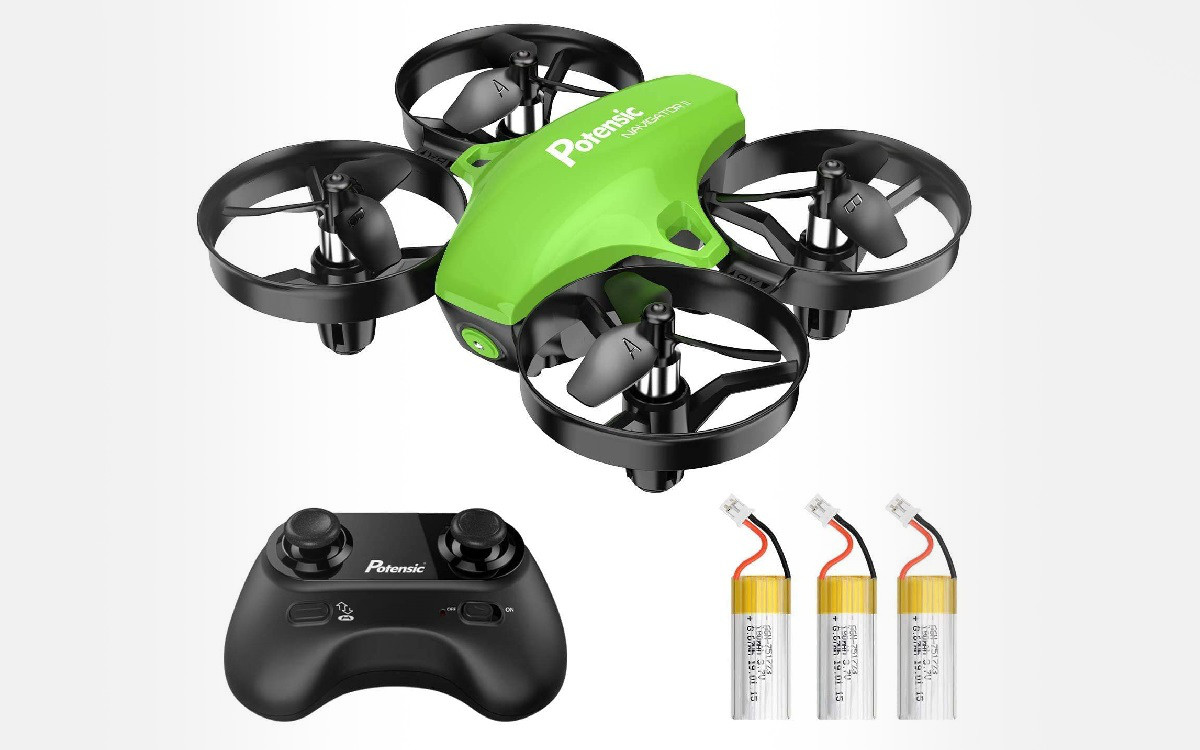 Let’s start with one of the most affordable beginners and kids’ drone models on the market: the Potensic A20 Mini. The latter can be used both indoors and outdoors. Offered below 30 euros, don’t expect to enjoy a flight experience comparable to that offered by the models presented earlier in this buying guide.

The drone comes with 3 detachable batteries (providing up to 21 minutes in flight) and 3 adjustable speed levels which provide an exciting flying experience for hobbyists and experienced pilots. It offers several features such as take off / landing by a button, altitude hold, headless mode and emergency stop … In the box, you will find a Mini RC Drone, three batteries, a remote control, a USB charger, two pairs of secondary propellers and a user manual. 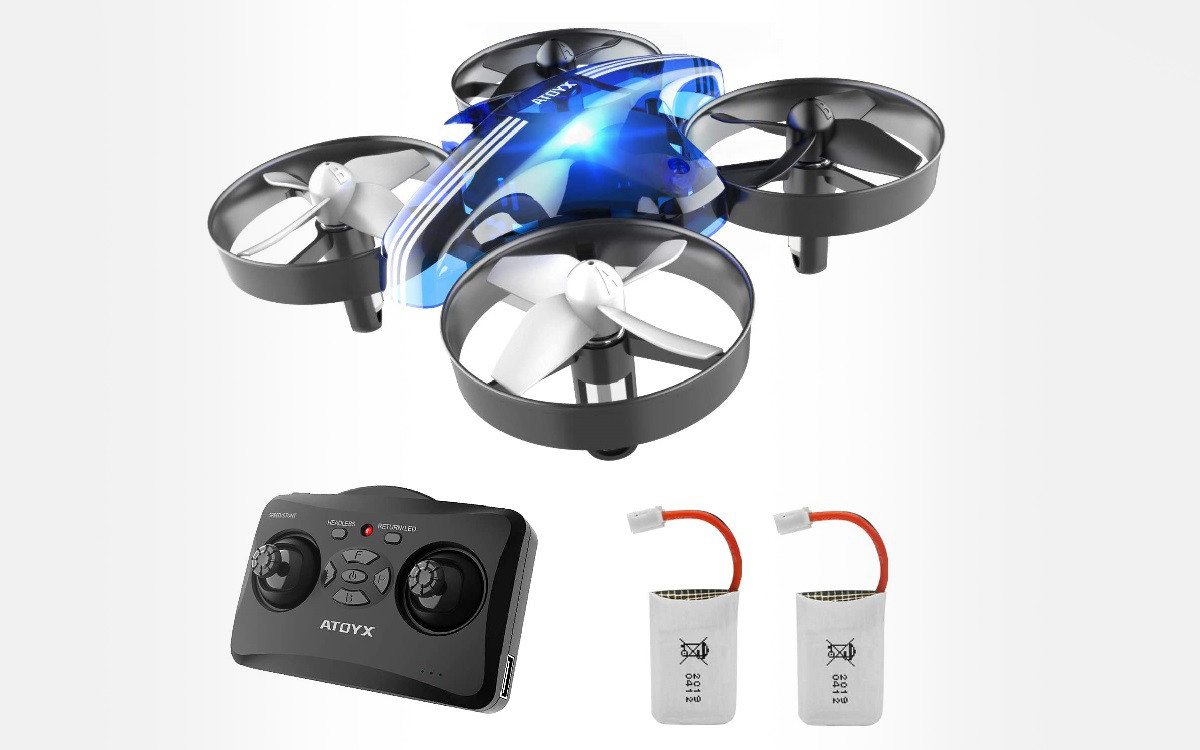 We continue with the Atoyx Mini which, as its name suggests, is a compact drone. This model offers a 3D Flip & 360 ° Rotation mode which allows it to rotate 360 ​​° in 4 directions: forward, backward, left, right. Like the Potensic A20 Mini, it can be steered via a remote control delivered with it. Two rechargeable batteries allow it to fly for about 10 minutes (with a full recharge, or 20 minutes in total).

Incorporating an “Altitude Hold” function, this mini drone can stay at a certain height when your hands are out of the controller. It is ideally recommended for children, beginners and hobbyist users. Used at night, its colorful LED lights allow it to be seen in the dark, creating an entertaining experience for children. It comes with a USB charger cable, a 2.4Ghz remote control (not including 2 AAA batteries), two batteries (a spare battery), four spare propellers and a user manual. 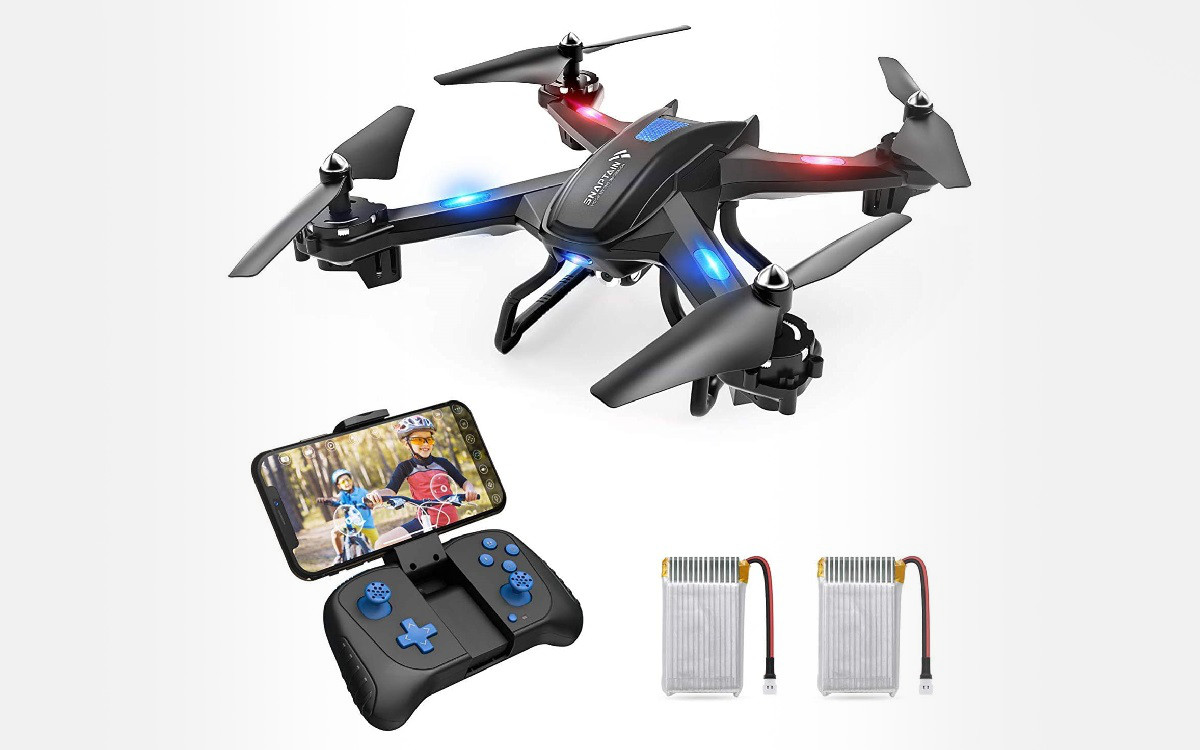 Another drone suitable for children and beginners, the Snaptain S5C. The latter offered at a price of 69.99 euros on Amazon is a little more efficient than the two models previously presented. It has a 720P camera to take photos and videos on the fly. There is also the integrated WiFi which allows you to have a real-time overview of your flight, directly from your smartphone. To do this, you must first install an application.

Equipped with a powerful 550mAh battery, it provides flight time of up to 7-10 minutes when fully charged. It also comes with two additional batteries that will allow you to prolong your pleasure. It is also endowed with basic functions which one finds on the majority of the drones of this range, namely a “Headless” and “Altitude Hold” mode but also “One Button Operation” which allows it to take off. or land easily. There is also a back button that allows you to avoid losing it. 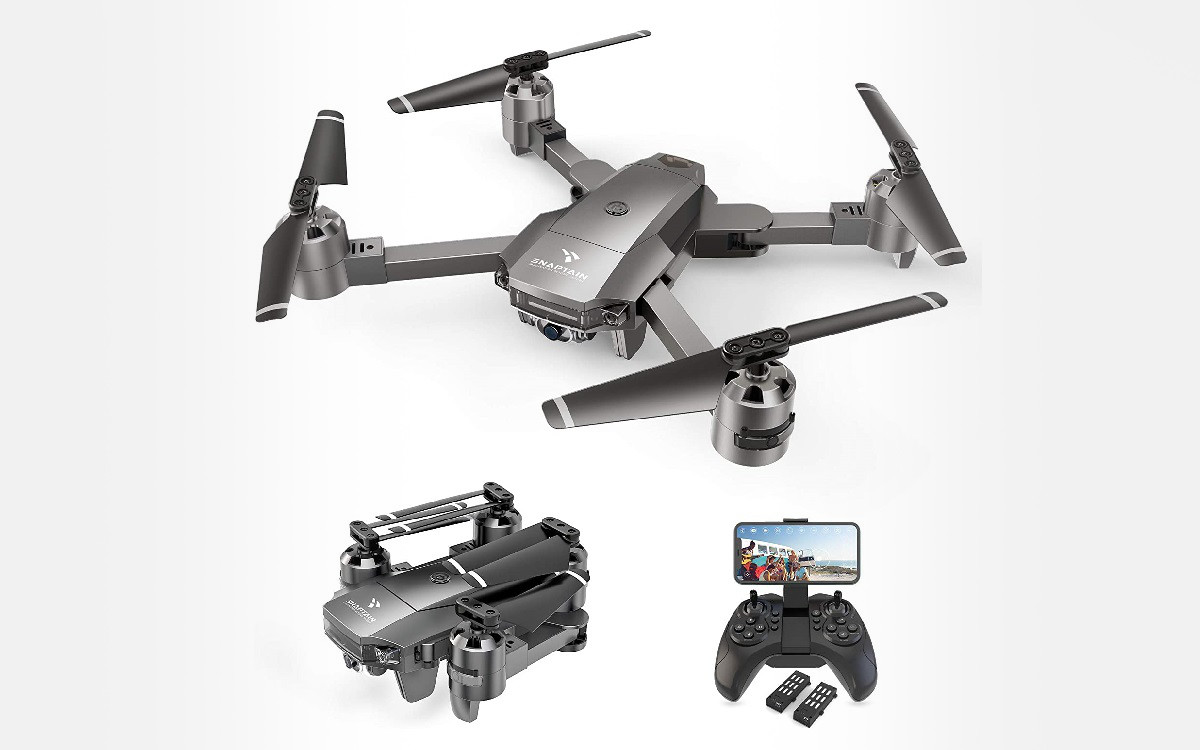 The Snaptain A15F is a cut above the children’s and beginner drones in our selection. Priced at 99.99 euros, it has a 1080p FHD camera. The transmission is done in real time on your smartphone and its autonomy can reach up to 24 minutes in flight. The maximum flight distance is 80 meters, with a height limit of 60 meters.

Easy to transport, the Snaptain A15F has dimensions of 13 x 13.5 x 6 cm when folded and 37 x 32.5 x 7 cm unfolded for a weight of 170 grams. Among the many features it offers, we note the “Follow Me” mode which allows you to easily follow a subject (both a person and an object), the gesture control mode which gives the possibility of triggering the photo taking. (by the “YEAH” gesture) and video recording (by the “thumbs up” gesture).

Finally, there are also 3 speed modes (low / medium / high). Ideal for beginners and more experienced people, it can be changed when the drone is in flight in order to offer maximum sensations. 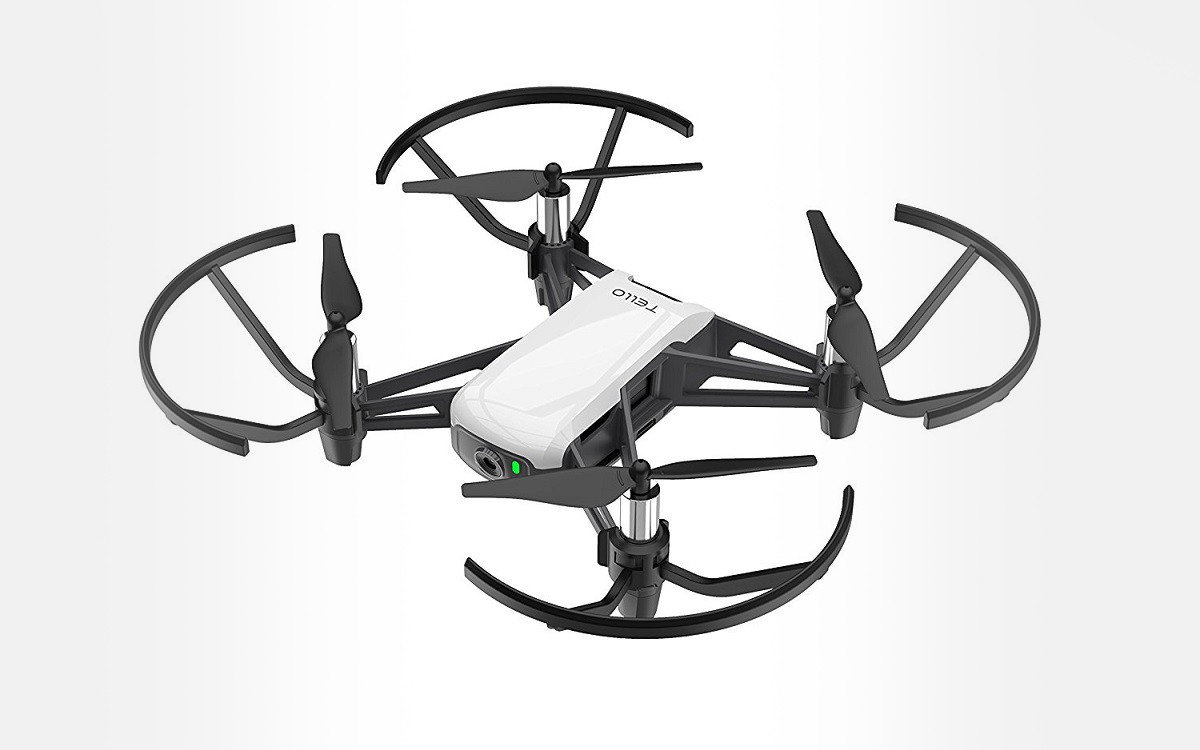 We close our selection of the best drones for children and beginners with a model from the manufacturer DJI, world leader in the marketing of drones for professionals and the general public. The Ryze Tello from DJI which is usually found around 100 euros. Tiny in size, the Ryze Tello fits in the palm of your hand with dimensions of 9.8 x 9.2 x 4.1 cm and weighs just 80 grams. It does not remain very solid all the same.

This four-propeller drone is equipped with an HD camera capable of capturing 720p video and taking 5 megapixel photos. Its battery gives it a flight time of 13 minutes and the image transmission distance is 100 meters.

✅Things to know before buying and using a drone

What does the law say about the use of drones?

The use of drones is subject to very specific regulations. Basically, if you buy a drone weighing less than 800 grams, you will not be required to have any prior training. If it exceeds this weight, you must register it online on the dedicated AlphaTango platform. In addition, you will need to complete online training so that you can legally fly your drone and be at least 14 years old, the legal age to fly a drone.

You must also be able to present your training certificate obtained after passing the online test when you use your drone. For people who have not reached the legal age of 14, they can remotely pilot the drone, provided they are accompanied by an adult of over 18 and holder of the certificate.

In the event that your drone weighs more than 800 grams, you must be able to present its registration extract when using it. For more information and other specific cases, we invite you to consult the guide on the simplified leisure and professional uses of unmanned aircraft on board by going to this address.

Administered by the DSAC (Civil Aviation Safety Directorate), AlphaTango is a web portal made available to users of remotely piloted aircraft (drones) which allows them, among other things, to:

🔎What are the air rules to follow to use a drone?

There are a few essential rules to follow when using your drone. As with the rules of the road, not respecting them can be dangerous and expose you to penalties. Here are the rules of the air.

🤔What are the overflight rules to respect for a drone?

In order to protect people but also so-called sensitive sites, there are hover rules. The first objective of the regulations is to ensure the safety of other aircraft. The second objective is to ensure the safety of people on the ground. Remotely piloted aircraft (drones) can cause serious injury to people on the ground. To do this, it is important to respect these few rules for hovering:

You can find built-up areas and areas prohibited from overflights due to the presence of sensitive sites by going to the restriction map for recreational drones.