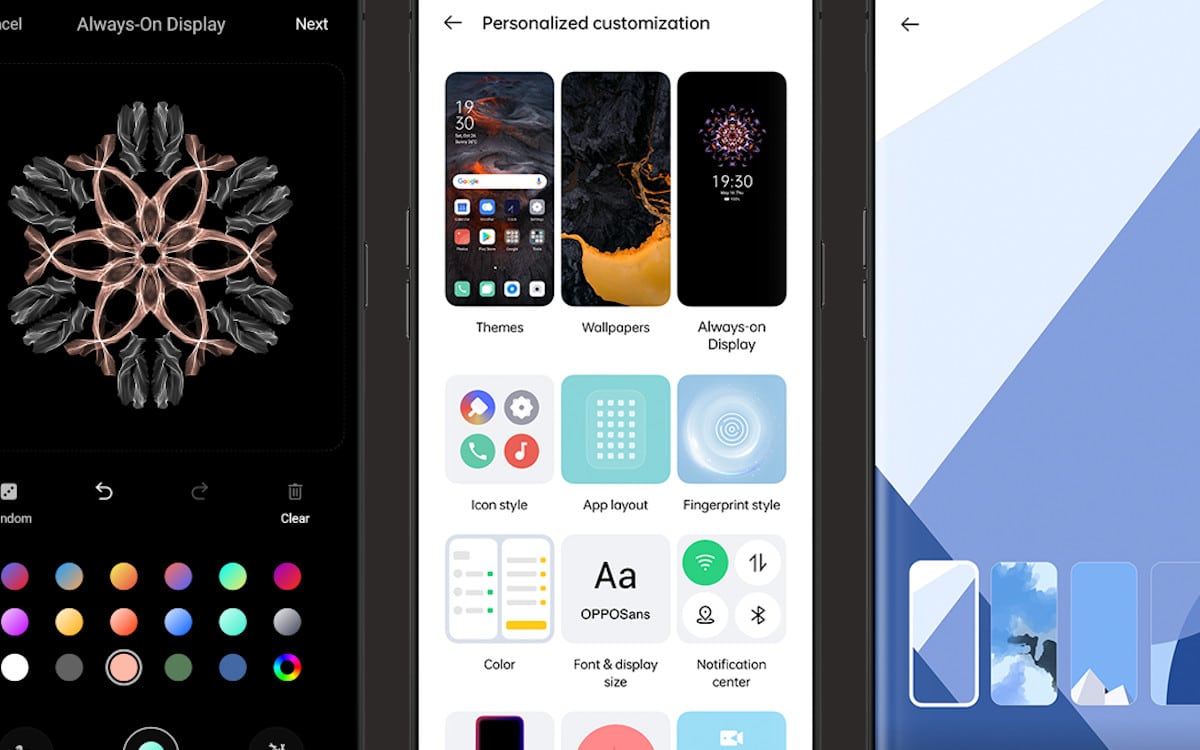 Oppo presented the new version of ColorOS on September 14. Based on Android 11, the Chinese brand’s ROM incorporates the latest innovations in the operating system and reinforces the security of applications and content. ColorOS 11 is already available for select Find X2s. 28 models are affected.

You obviously know the alternative Android ROMs. Huawei has EMUI. Xiaomi has MIUI. OnePlus has OxygenOS. And Oppo has ColorOS. These are versions of Android that manufacturers customize a little more deeply than an overlay (like Samsung’s One UI or Asus’ ZenUI). The vast majority of Chinese brands use alternative ROMs for their smartphones, thus removing access to Google services which are banned in the Middle Kingdom.

Last week, Huawei introduced the latest version of EMUI. It is based on Android 10 and incorporates many features, including the multi-window mode to open several applications on the large screens of the P30, P40 and Mate 30 of the brand. A few days later, it was Oppo’s turn to do the same. At the start of the week, the brand unveiled ColorOS 11, a ROM based on Android 11 this time around (Oppo is not in the same situation as Huawei vis-à-vis Google).

And it has already started to appear on some smartphones in the Find X2 line, including the Find X2 Pro. ColorOS 11 will be gradually deployed on around thirty models between September 2020 and the end of the second quarter of 2021. Note, however, that the provisional dates (available at the end of the article) relate to models sold in open-market. Simlocked models will, as always, have a small delay due to additional validation by the operator.

In this list, you will find a large number of models released in France in 2020. You will notably find the Find X2 Pro, the very recent A72 as well as A9 2020 and A5 2020. You won’t find the Find X2 Lite and Find X2 Neo here, however. In our opinion the reason is simple: these two phones are international versions of some Reno3: the Reno3 5G and the Reno3 Pro 5G. The two Find X2s should therefore be served at the same time as the Reno3s.

Several new features are announced and here are our three favorites. First Flex Drop, which, like EMUI 11, is a more flexible multi-window mode than Picture in Picture that you could use with Google Maps or YouTube for example. Then Private System, which duplicates the interface to create a second environment separate from the first. The applications are also split. And access to the second interface is protected, of course.

Finally Battery Guard which protects the battery a bit like the latest version of ZenUI (on the ZenFone 7 Pro for example): blocking the charge at 80% and charging programmed and synchronized with the wake-up time. Battery protection is a strong trend. ColorOS 11 is further proof of this. Of course, the new features of Android 11 on temporary permissions and personal data protection are carried over to Color OS11.

Oppo also offers in its new interface the control of connected objects, even those of third-party brands; Nearby Share, the sharing system developed with Vivo and Xiaomi; proactive loading of the most used applications in RAM; automatic translation of text contained in a screenshot; or Oppo Relax 2.0, which offers a bit more content for concentration.

On the interface side, ColorOS is enriched with new customization functions, especially in the “Always-On” screen, which can now be completely changed. This tweak comes in addition to customizing the overall appearance of the interface and the classic lock screen. So here are all the great novelties of ColorOS 11, in addition to the correction of bugs and the usual optimizations.

Here is the list of models and the planned deployment dates: