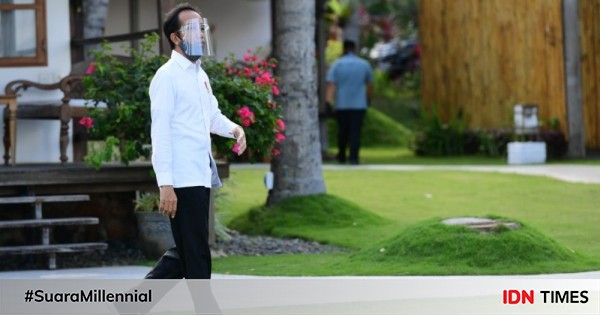 Quoted from the Presidential Secretariat, Jokowi said, Banyuwangi is one of the areas that is most seriously fixing the tourism sector amid the corona virus pandemic or COVID-19. According to him, the readiness is done so that the tourism sector can return to moving and safe for visitors.

“I see that the Banyuwangi field is the area most ready to prepare preconditions for a new normal,” Jokowi said in Banyuwangi, East Java, Thursday (6/25).

1. Jokowi calls the three-star hotel down in Banyuwangi as a permit for small people

During the visit, Jokowi appeared wearing a mask and face shield (face shield) while visiting the area where the inn is located. While reviewing the tourism area, the president also listened to the Banyuwangi Regent Azwar Annas’s presentation.

Jokowi said, the tourism sector in Banyuwangi involved the community to take part in supporting the tourism sector. In the regency, for example, hotels with a similar level of a three-star down like a halfway house (homestay) licensing is only for small people.

“Hotels, for example, three stars and below, are all given to the people, four and five stars and so on are given to investors,” the president said. Therefore, the former Mayor of Solo fully supports what the Banyuwangi District Government is doing in moving its tourism sector, especially in terms of preconditions towards adaptation of new habits.

“We fully support what the Regent and Governor do in preparing preconditions for a new normal order, so that later on timings right to be reopened, the community, especially the tourism sector, is really ready, “Jokowi said.

3. The cabinet ministers, the head of the Task Force, and the governor of East Java accompanied Jokowi A number of ministers accompanied Jokowi on a visit to Banyuwangi, including Coordinating Minister for Politics, Law and Security (Menko Polhulam) Mahfud MD, Minister of Health Terawan Agus Putranto, and Minister of Tourism and Creative Economy Wishnutama Kusubandio.

4. The government is preparing a new normal era scenario President Joko “Jokowi” Widodo said the government would immediately start the scenario new normal or new normal. However, the application of the new normalization is not carried out simultaneously, but it will start from areas that are considered to be safe or the spread of the corona virus is decreasing.

“We are starting for this new order, we are trying in some provinces, districts and cities that have R0 below one, and also in certain sectors that we see in the field can do, following the new normal order that we want to work on,” said Jokowi in a limited meeting that was broadcast live on the YouTube channel of the Presidential Secretariat, last Wednesday (5/27).

The plan is for the government to carry out five stages in the new normality policy, starting from opening up the business and industrial sectors, markets and malls, schools and cultural sites, restaurants and places of worship, to the normal operation of all economic activities.

#NormalNew is a new order of life, where the community must #LifeBersamaCorona. This new order is an option so that life activities continue to run in the midst of the corona virus pandemic, by continuing to run health protocols according to the recommendations of the World Health Organization (WHO), to avoid the deadly virus.

The health protocol is like wearing a mask in a crowded place, keeping a distance in public facilities, diligently washing hands, eating nutritious food, getting enough rest, and maintaining a healthy body condition so that it is not susceptible to corona virus.