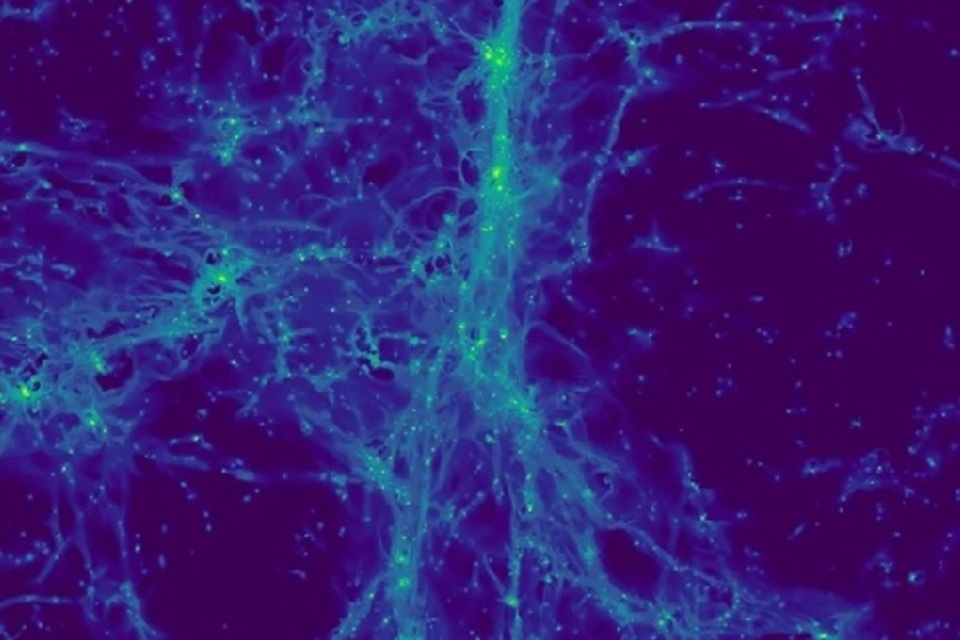 The universe is a space with a lot of movement. Even though we cannot perceive it, we ourselves rotate around the center of the galaxy. Now, for the first time, astronomers have found evidence that some of the largest structures in the cosmos also rotate — on a scale of hundreds of millions of light years. If validated, this will be the largest rotating structure ever seen – and its angular momentum can be generated at absolutely mind-blowing scales.

Was it the pawn in the chest?

No, no, the shape is more like a tube that forms a space road. The giant in question is a cosmic filament – ​​a long, cylindrical structure of dark matter, which extends through space, like a kind of bridge between clusters of galaxies. According to astronomers, these filaments are strands of a vast web, through which the galaxies and the material that make up the stars are channeled into the nodes of the cluster. The study was published June 14 in the journal Nature.

“By mapping the motion of galaxies on these massive cosmic highways using Sloan Digital Sky research [uma pesquisa de centenas de milhares de galáxias], we found a remarkable property of these filaments: they rotate”, explained astrophysicist Peng Wang, from the Leibniz Institute of Astrophysics Potsdam (AIP), in Germany, during an interview with the Science Alert portal.

Illustration of the cosmic web in the distant universe, with light emitted by hydrogen atoms. According to the study, the filaments of this web rotate.Source:  Jeremy Blaizot/project SPHINX/Reproduction

Entire galaxies can be found along this filament, not just within the clusters – this gives scientists a tool to identify rotational motion within the filament itself. These filaments are hundreds of millions of light years long, but only a few million light years across. On such large scales, you won’t be able to see galaxies actually moving, but as astronomers reminded you, light from a moving object still gives you away.

It is the Doppler effect – which causes changes in the wavelength of light depending on its movement towards or away from the observer. Light wavelengths from an oncoming object will appear to shorten slightly towards the blue end of the spectrum, or blueshift and wavelengths of moving objects increase or change to red.

By carefully studying the light of galaxies in the cosmic filaments and comparing them to each other, astronomers found that, compared to the other side, the galaxies on one side of the filament were redshifted – this is exactly what would happen if the galaxies were in vortex motion perpendicular to the spine of the filament. “At these scales, the galaxies within them are just dust particles,” AIP cosmographer Noam Libeskind explained to Science Alert.

“They move in helices or corkscrew-shaped orbits, circling around the middle of the filament as they travel along it. Such rotation has never been seen before on such enormous scales, and the implication is that there must still be a physical mechanism still in place. unknown responsible for torquing these objects,” said Libeskind.

Now astronomers intend to find out what this mechanism is to understand how angular momentum is generated in the cosmos, which is currently still a mystery. In known cosmological models, there was no rotation in the early Universe – matter moved from less to denser regions.

One theory, described as tidal torque, suggests that the presence of a shear force may have added some distortion to motion, but astronomers don’t yet know enough to account for it in models of cosmic evolution.

As galaxies are connected and powered by cosmic filaments, these structures play an important role in the formation and evolution of galaxies, including their rotation. But if the very filaments they are on rotate, it has only been theorized before. The discovery of this movement, if realized, should help to better understand the emergence of angular momentum in the Universe and the role that the cosmic web plays in regulating it.