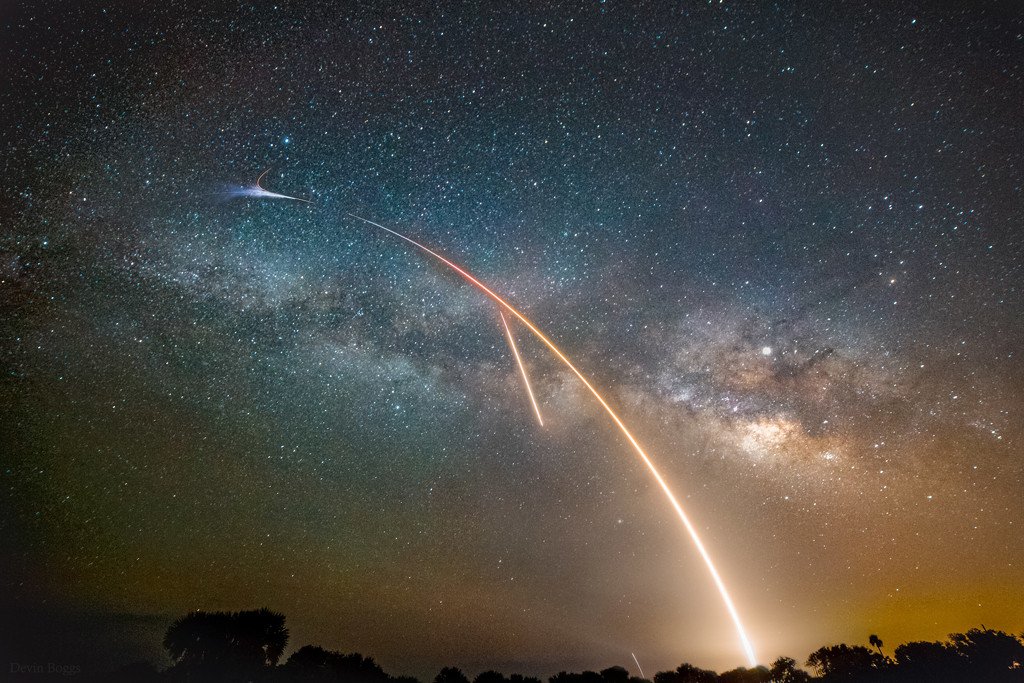 Every Saturday, TecMundo and #AstroMiniBR bring together five relevant and fun astronomical curiosities produced by the contributors to the Twitter profile to spread the knowledge of this science, which is the oldest of all!

This week, we’re going to show you what it’s like to see a rocket from space and talk about starting tests with the biggest rocket engine ever made in Brazil!

#1: From the series: things you don’t see every day!

If observing the launch or re-entry of a rocket are rare events, imagine seeing such an event from space? A spectacle like this was recorded by the crew of the International Space Station (ISS) in October 2011. The video above is a time-lapse taken with a sequence of photos taken during an ISS pass east of New Zealand , in the South Pacific Ocean, while heading southeast. It shows the re-entry of the Progress 42P space vehicle into the Earth’s atmosphere, shortly after being decoupled from the ISS. Progress is a refueling vehicle that carries supplies for the space station’s crews. In addition to the trail of fire caused by the combination of the probe’s high speed and friction between its metallic surface and the Earth’s atmosphere, the crew contemplated the sunrise over the ocean as a gift!

Unfortunately, to the dismay of the producers of the Fast and Furious franchise, it is not possible to find a plausible scientific justification for the idea of ​​cars driving in the rings of Saturn. That’s because these rings, the most extensive set in the Solar System, are made up of hundreds of thousands of tiny particles, which vary in size and shape, from a few micrometers to a few meters, with a few that are larger than a bus. These particles are separated by short distances from each other and do not form any solid continuous structure. They are composed primarily of water ice and remnants of rocky materials such as silicates and organic compounds and extend 7,000 km to 80,000 km away from Saturn’s equator. These rings are believed to be pieces of shattered comets, asteroids or moons that shattered before reaching the planet, destroyed by Saturn’s immense gravity.

Esta é a Nebulosa do Lápis. ?

Scientifically named NGC 2736, this nebula’s narrow, thin appearance is the reason for its popular name, Pencil Nebula. About 800 light-years away from us and about 5 light-years in total length, the Pencil Nebula is just a small part of the supernova remnant of the Constellation Vela. In the image, the supernova shock wave travels through interstellar space at more than 500,000 kilometers per hour. Near the central region of this color composite image, you can see the fine, shiny braided filaments that are moving upward. These are actually long ripples of glowing gas seen in profile. The red and blue colors represent the characteristic glows of the ionized hydrogen and oxygen atoms, respectively. The star that gave rise to this cosmic remnant exploded about 11,000 years ago. Initially, the supernova shock wave moved at millions of kilometers per hour and slowed down as it lost energy from contact with interstellar material.

#4: The S50 test: the biggest rocket engine ever made in Brazil!

On the first Friday of this month (1st), the Brazilian Air Force (FAB) together with the Department of Aerospace Science and Technology (DCTA) and the Institute of Aeronautics and Space (IAE) carried out the first static test of Bench Shooting of the Motor-Rocket S50, an entirely national project. The S50 engine will compose the launch vehicle (VLM-1) and sub-orbital (VS-50) stages and is one of the innovative projects of the Brazilian Space Program. The test represents a step towards the establishment of a complete Brazilian launch project where it will be possible, through microsatellite launch vehicles, to place payloads of up to 50 kilos in orbit.

#5: What is the result of a merger of galaxies?

The image above shows the galaxy NGC 3256, located at a distance of about 100 million light years from Earth. It is estimated to be the result of a merger between two galaxies with similar masses that occurred 500 million years ago and that still bears the marks of this colossal event: an exceptionally bright central region, swirling dust lanes, and distant tidal tails . Although in a collision of galaxies individual stars rarely collide, the huge clouds of molecular gas and dust interact and produce spectacular explosions of star formation. For this reason, the central region of NGC 3256 experiences star formation much faster and more intense than normal. Furthermore, in this dance of galaxies, the disks of both, once individual, are no longer distinct and their two cores will also merge as NGC 3256 becomes a single large elliptical galaxy!