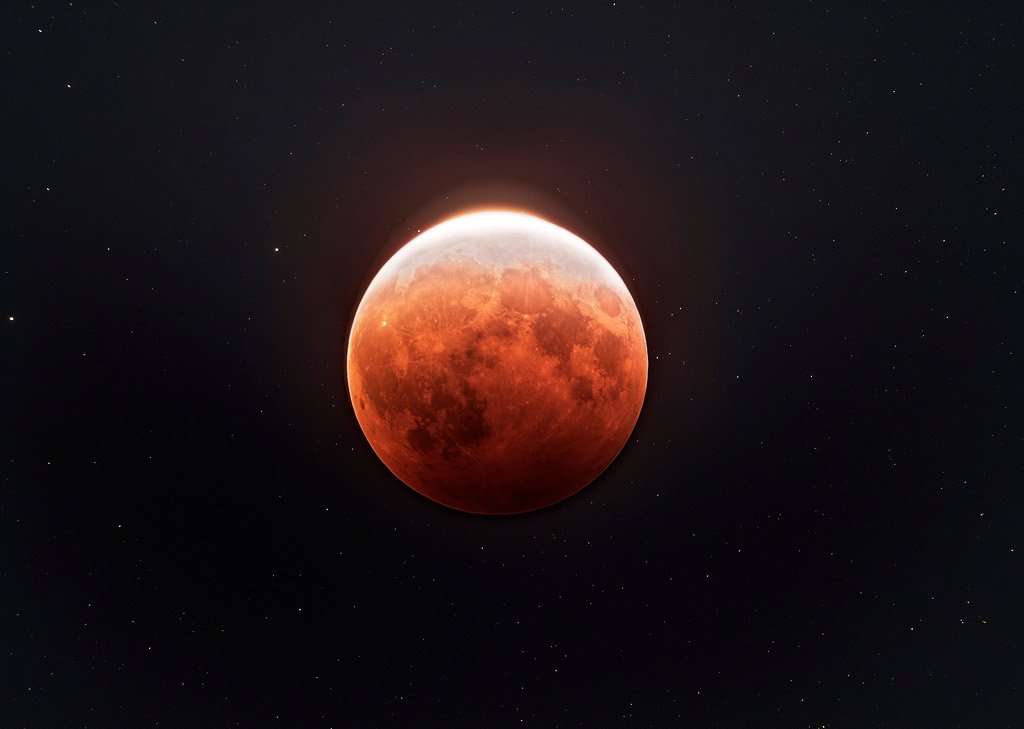 Tomorrow the Moon will hide from the Sun behind the Earth and in astronomy we call this a lunar eclipse?#AstroMiniBR pic.twitter.com/i2nCg5toXO

To make the Lord of the Rings franchise movies jealous, the spectacle caused by Friday’s dawn lunar eclipse had a total duration of 3 hours, 28 minutes and 23 seconds: the longest in 581 years since the eclipse of February 18, 1440, which lasted about 23 seconds longer.

The lunar eclipse could be seen with the naked eye in different parts of the world: across Canada and the United States, across large parts of South America, Asia, the islands of Polynesia and Oceania. Here in Brazil, it could be seen from several cities (at least those that kept the skies free of clouds and rain) with variable starting times and durations, depending on the geographic location of each one of them. In general, it was possible to see the phenomenon for about 2 hours, due to the fact that the Moon was already very close to the horizon during the final part of the eclipse.

A phenomenon like this always occurs when the Moon, Sun and Earth align, preventing the sun’s rays from reaching the surface of our natural satellite. Lunar eclipses fall into three main categories: eclipse penumbral, in which the Moon passes through the outermost projected shadow of the Earth; partial eclipse, in which only a portion of the Moon passes through the Earth’s innermost shadow; it’s the total eclipse, in which the Earth’s shadow blocks the entire surface of the Moon from sunlight.

#2: A message to alien civilizations!

Known as Message from Arecibo (sent from the famous radio telescope), the transmission sent information about the Earth to a possible extraterrestrial civilization.#AstroMiniBR pic.twitter.com/kvXLFrAA1n

In the year 1974, the most powerful transmission transmitted to space was carried out. It was taken by the radio telescope in Arecibo, Puerto Rico, on November 16, and took place as one of the activities commemorating significant updates made at the time on the same telescope.

The message, aimed at the grandiose globular cluster of stars known as the Cluster of Hercules (M13) and some 21,000,000 light-years away from us, consisted of a simple, pictorial message: a total of 1679 bits encoded and arranged in 73 lines of 23 characters per line, both prime numbers that would make decoding the message easier.

Issued over almost three minutes, the image presented above represents a graph that reproduces the information sent to the cluster: a simplified diagram of the radio telescope that sent the message, our Solar System and our location in it, the matrix of our DNA, a representation of the figure of a human being and some essential chemical elements for life on Earth!

The iconic Arecibo radio telescope was deactivated in 2020 after a series of damages to its structure caused part of the building to fall.

Is this a pair of interacting galaxies? In fact, it’s not! These are galaxies NGC 3314a (front and bluest) and b (back and yellow), and although they appear to be very close, they are 23 million light-years apart.

The celestial object cataloged as NGC 3314 was discovered by the famous astronomer John Herschel in the year 1835. The set that looks like two galaxies in the process of merging is actually the union of two large spiral galaxies that line up almost perfectly in relation to each other. to an observation from here on Earth.

The spiral galaxy ahead, in the foreground, is seen almost entirely facing us. It is filled with young clusters of bright stars. The apparent overlap of this remarkable pair of galaxies is not as common in our observations of the Universe and, although they appear close, the background galaxy is about 140 million light years from us and the front galaxy about 117 million of light years away.

Back in the early part of September 2021 you were worried about independence day and the spaceship. @NASAJuno he was “skimming” Jupiter and catching another type of storm. This cyclone is about 400 km, almost the distance Rio – Sampa! #AstroMiniBR https://t.co/MhPAll0fB8

During its 36th low-orbit pass over the Solar System’s largest planet, the gas giant Jupiter, NASA’s Juno spacecraft made this impressive record of its atmospheric clouds and frequent storms. What looks like a small whirlpool in the image above is actually a vast cyclone that stretches for about 400 kilometers! The color difference in its central region is possibly generated due to the interaction of the winds with the multiple layers of clouds on the planet, which ended up revealing different chemical compositions in the inner layers of its atmosphere.

In this composition, we have NGC 281 in the visible together with its stars, observed in X-rays (in purple) and in infrared (in red).
Thus, we can reveal stars that were once obscured and admire the beauty of this stellar nursery.#AstroMiniBR via @apod pic.twitter.com/3g8cGfCUyt

The large cosmic cloud known as the Pacman Nebula because of its iconic shape (or simply because of the fertile imagination of astronomers) contains a huge nursery of young stars called IC 1590. The extremely massive baby stars of this cluster fuel the nebula’s intense glow and the peculiar shapes that appear in the image above are structures carved by stellar winds! If they survive long enough, these dust-laden structures will also serve as sites for future star formation!