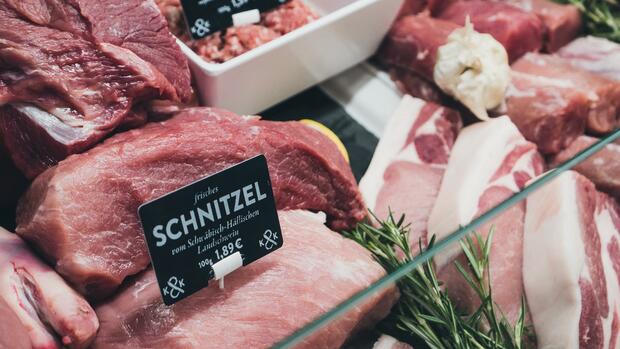 Dusseldorf It is getting tight in the pig farmer Antonius Tillmann’s stable in Warburg. The 700 sows are getting fatter. Otherwise they will be slaughtered in Tönnies’ main plant, 60 kilometers away.

“Unlike pigs, unlike cars, production cannot simply be stopped. That would take nine months, ”says Bauer Tillmann. Now the sows ready for slaughter accumulate in many of the approximately 21,000 fatteners all over Germany. At the same time, ordered piglets move up. “Our industry has never experienced a crisis like this, even during the swine fever,” says the farmer.

Because there are no slaughter places, Tillmann has to feed the sows longer. That costs money – one euro a day per animal. On average, he earns just 20 euros per pig. The animals become fatter and at the same time lose value, because the Germans prefer lean meat.

Tillmann fears losing business if the slaughterhouse crisis persists. In addition to Tönnies, the competitors Vion, Westfleisch, Müller-Fleisch and Westcrown were also affected by Corona and closures.

Not only the pig industry is affected by Corona, the wheels of an important turkey slaughterer have also been standing still since Friday. The PHW Group, the largest poultry slaughterer in Germany with a turnover of 2.7 billion euros, has a corona problem. It is known for brands such as “Wiesenhof” and “Bruzzler”.

In a huge turkey slaughterhouse in the Lower Saxony town of Wildeshausen, 45 out of 1115 employees developed Covid-19. The company Geestland Turkey Specialties (GPS) announced on Friday: The business will be closed for up to two weeks – with far-reaching consequences.

Supply chain gets out of step

If the slaughterhouse crisis persists, there may also be supply shortages in addition to animal welfare problems. The failure of the Tönnies slaughterhouse in Rheda threatens to disrupt the entire German pork market.

The supply chain from piglet to schnitzel is closely timed. Piglet breeders, fatteners, cattle dealers and logisticians, butchers and cutters, sausage manufacturers to supermarkets and sausage stands – everyone is somehow affected by the failure of the Tönnies factory. “If only one wheel does not turn properly, our entire system will jerk,” says farmer Tillmann.

Meat from Tönnies is in many brands like Tillman’s, Landjunker from Lidl, Meine Metzgerei from Aldi. East Westphalia also runs its own sausage factories with the Zur Mühlen Group. Böklunder, Redlefsen and Zimbo are among the best known of the brands.

Finding replacement butchers is not that easy. Farmer Tillmann’s pigs are now partially slaughtered in a Tönnies plant in Saxony-Anhalt. “We can absorb a small part of the capacity at our other locations in Sögel, Weißenfels and Kellinghusen. However, this is only possible to a very limited extent, ”a spokesman for Tönnies explains on request.

Pig suppliers would have “a problem with the acceptance of a customer as big as Tönnies,” confirms the meat industry association, which – at least for the time being – has not yet observed any delivery bottlenecks. The animals ready for slaughter are currently being held back and partially caught by other slaughterhouses.

For example, the Westfleisch cooperative, which belongs to 4,000 farmers, wants to help out. When their slaughterhouse in Coesfeld was officially closed for eleven days in May due to Corona cases, Tönnies had stepped in. Westfleisch has now offered support to Tönnies, Germany’s second largest butcher said on request. Around 6,300 pigs are currently slaughtered in Coesfeld every day. The capacity utilization is to be gradually increased in coordination with the authorities.

Tönnies’ customers, meat processors and retailers, are nervous. “In this uncertain situation, the industry is naturally worried,” says Hans-Ewald Reinert, managing partner of The Family Butchers. The sausage and ham manufacturer from Versmold is number two on the German sausage market behind the Zur Mühlen Group, which belongs to Tönnies.

“There are currently no major bottlenecks in the market. However, we expect a significant shortage in the sow’s upper shell, ”said Reinert. He believes that there could also be bottlenecks in fresh meat in self-service.

Some in the industry fear that Tönnies would prefer to supply the Zur Mühlen Group’s own processing plants. “The big slaughterhouses are all sausage manufacturers and therefore competitors,” says sausage manufacturer Reinert. “In the past, we sometimes had to experience that our own production was primarily supplied.” Tönnies assures, however, that there is no prioritization of the Zur Mühlen Group.

There are still no effects on prices due to the slaughterhouse crisis. The German Farmers’ Association, however, has already appealed to the slaughter companies not to use the lack of slaughterhouses to depress prices. However, sausage producer Reinert expects prices to rise in the medium term. After all, changing production conditions and corona protection cost money.

From January 2021, contracts for slaughter and cutting should be prohibited by law. The Corona cases had put the non-transparent subcontracting and poor working and living conditions of many employees back in the spotlight. The contractors mainly come from Romania, Poland and Bulgaria.

At the same time, meat is often sold at discount prices in the discounter. Federal minister of agriculture Julia Klöckner (CDU), who had invited industry representatives to the crisis meeting on Friday, should put an end to cheap meat in the future. It wants to introduce a so-called animal welfare tax, create better working conditions and take action against dumping prices for meat.

“Hopefully the time of permanent consumption of meat and sausage products will finally come to an end”, hopes entrepreneur Reinert, who wants to score more with quality meat.

Germany produces significantly more pork than it consumes. The degree of self-sufficiency is 120 percent. “Basically, there is enough meat,” says Matthias Quaing, market expert of the interest group of pig farmers in Germany (ISN), with a view to the current crisis. 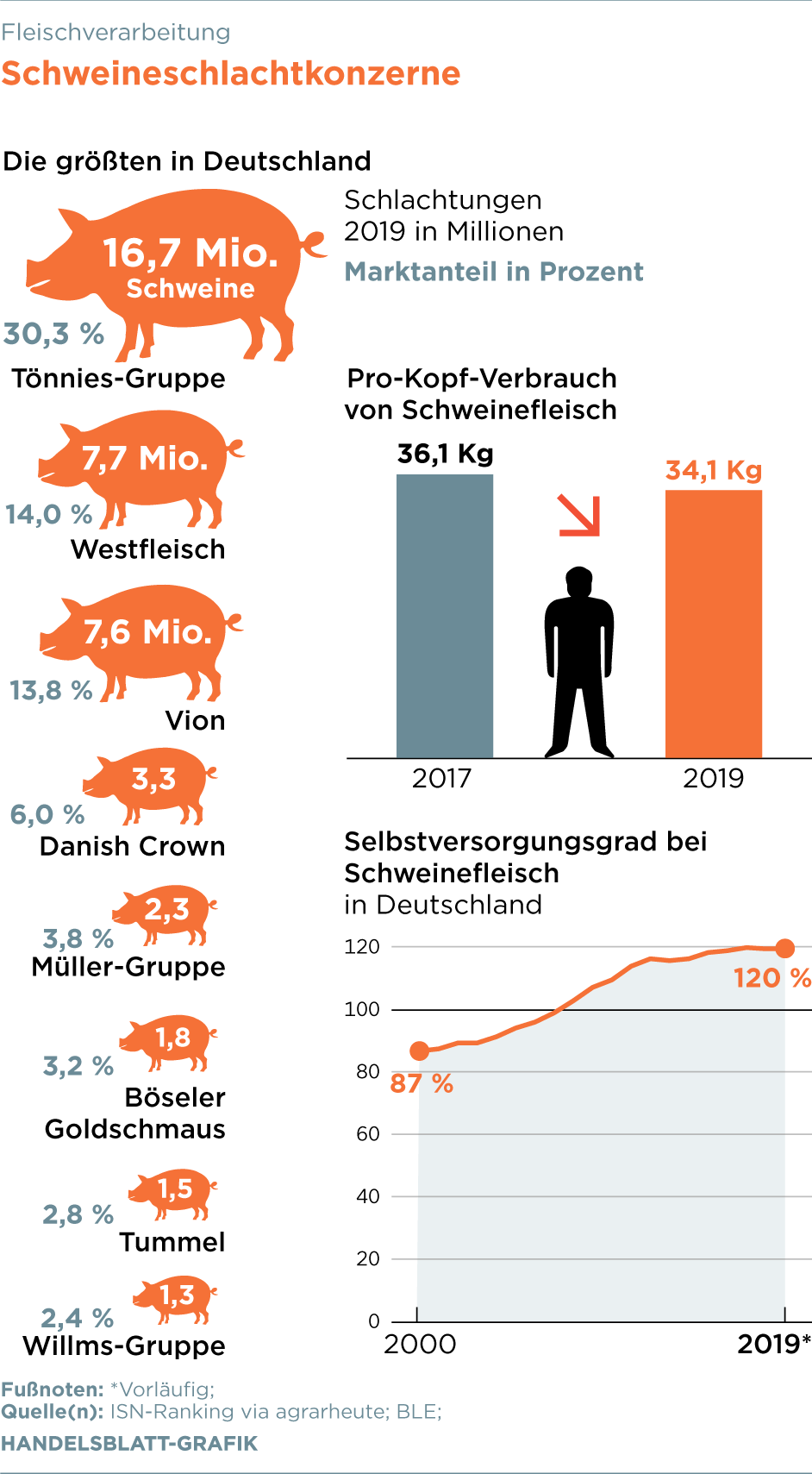 Should pork become scarce in this country, imports could still be switched to – for example from Spain, where most of the pigs in Europe are kept. Meat from Spain is currently still missing the necessary QS certification, sausage manufacturer Reinert points out.

However, more pork is currently available for the German market than usual. China, an important buyer of tönnies, temporarily stopped importing tönnies from Rheda and Weidemark in Sölden due to the corona outbreaks. The Chinese embassy in Berlin said on request.

“Our export license to China from the Rheda location is currently on hold,” confirms Tönnies. “But we are in intensive contact with the Chinese authorities.” Up to now, exporting to China has been an important and lucrative business for the company.

Before the meat supply, animal welfare is primarily threatened. “If a fattener is unable to market his animals within a week or two, there could already be difficulties,” says Miriam Goldschalt, specialist officer for animals in agriculture at the German Animal Welfare Association.

Bernhard Krüsken, General Secretary of the German Farmers’ Association, also warns if the Tönnies site in Rheda-Wiedenbrück as a slaughterhouse may fail for several weeks, threatening animal welfare problems.

The situation is even more dramatic for turkeys. Since the PHW group has no other slaughtering and cutting plant for turkeys in Germany, “animal welfare problems in the rearing farms” would now threaten, the company admits.

Geestland Turkey Specialties (GPS) announced that it would ask the Lower Saxony Ministry of Agriculture for a special permit for slaughter in other farms. “Solutions for farmers must be found together and as quickly as possible,” said Geestland boss Norbert Deeken. In the worst case, farmers would otherwise have to kill healthy animals.

Because the supply chain is clocked even more closely than with pigs. Turkeys are fattened for only three and a half to a maximum of five and a half months. If they are marketed as “baby turkeys”, even only two to three months. Your breeding is planned to the day. Friedrich-Otto Ripke, Chairman of the Lower Saxony Poultry Industry Association, speaks of a “just-in-time procedure”.

Ripke emphasizes that there are hardly any companies that slaughter in dimensions similar to those of Geestland. In addition, turkeys could not be kept in the stables as long as pigs. The reason: you cannot sweat, heat stress sometimes makes them aggressive. “So if a large yard like Geestland closes, in the worst case, entire stables have to be culled,” says Ripke.

In the United States, animals have already been killed because of corona slaughterhouses. The situation in Germany is not yet so serious. Tönnies hopes that operations will gradually resume on the weekend of June 4 after the package of measures has been successfully examined by the authorities. Tönnies wrote this in a letter “To Our Customers” last Monday.

In the five-page letter available to the Handelsblatt, Tönnies expressed his “deep regret”. “We apologize for any inconvenience this may cause you.”

More: Fear of meat shortages: what the closure of Tönnies means for the trade