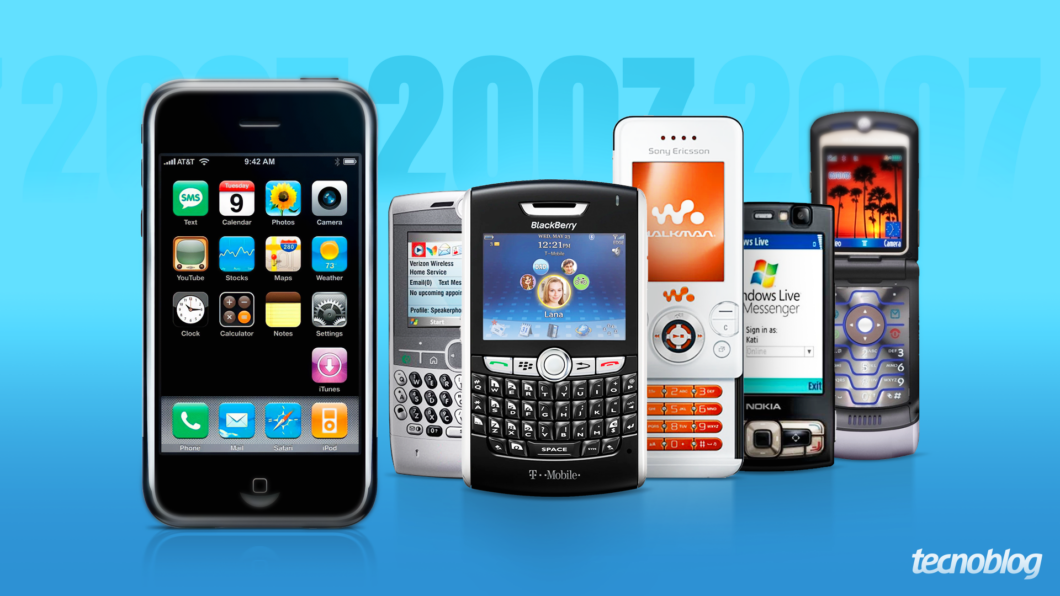 THE iPhone turned 15 in 2022. At the launch event, in 2007, Steve Jobs took the stage and presented a model that, shortly afterwards, would be responsible for the main changes and evolutions in the mobile sector. With a touch screen (something that was not common at the time) and full of features, the iPhone 2G, as it became known, registered considerable success in the first few months.

However, Apple’s cell phone was not alone in the market, as there was strong competition in 2007, with devices from different brands trying to reach the top of the best sellers. Below, you can see some of the main rivals of the first iPhone.

The Motorola Q was the brand’s attempt to launch a Windows Mobile phone in the style of the popular RAZR V3. This device had a thin body and ran version 5.0 of Microsoft’s system, but the lack of a touchscreen made the user experience a little more complicated. However, it was the first model with a QWERTY keyboard to sell over 1 million units.

The 8 GB version of the Nokia N95 was a big competitor to the first iPhone. Thanks to the high storage capacity at the time, consumers could save more photos, videos and music. The device also delivered the most advanced multimedia features of the moment, in addition to GPS and 3G support, features that not even the Apple cell phone had.

You may not know, but the LG Prada was the world’s first capacitive screen phone. The South Korean manufacturer managed to get ahead of the competition (at least in this aspect) when it presented the model in 2006. In addition to the screen, the device had some attractions, such as a music player and document viewer. These and other features yielded 1 million units sold in the first 18 months.

The Motorola RAZR V3 was the dream of many people (including mine). Despite being launched in 2004, the device was still very popular when the first iPhone hit the market. That’s because the manufacturer bet on a modern design, thin body, laser-designed keyboard and secondary screen. The RAZR V3 sold an incredible 130 million units, making it the seventh best-selling cell phone in history.

The HTC Touch is considered one of the best looking Windows Mobile phones of all time. In addition to being small and light, the device featured the TouchFLO interface with several optimizations that allowed using your fingers to navigate the system more intuitively. It also had support for Outlook and Office Mobile, as well as extended compatibility with third-party applications.

The BlackBerry 8800 arrived just before the first iPhone. he brought the trackball of the BlackBerry Pearl for better navigation, but it was distinguished by the full QWERTY keyboard and several productivity features, a hallmark of the brand. The phone was also thin and had microSD support, but the lack of some technologies, such as Wi-Fi and 3G, and the rise of the Apple device, hindered its growth.

Sony Ericsson W580i has been released with advanced multimedia features. This device was aimed at a younger audience and stood out for supporting the Walkman, which included compatibility with various music formats and adjustments for sound quality. It also offered a fitness app, with a step counter and calorie tracker, and it could be found in up to six different colors.

In 2007, Samsung introduced a different device. UpStage combined two products: cell phone and music player. One side was dedicated to the player, while the other had a keyboard for making calls. Although the concept is interesting, the device did not appeal to the public due to some problems, such as non-removable battery and the need to press a button to switch between sides.

So, which model did you have or was your dream of consumption? Tell us in the comments!