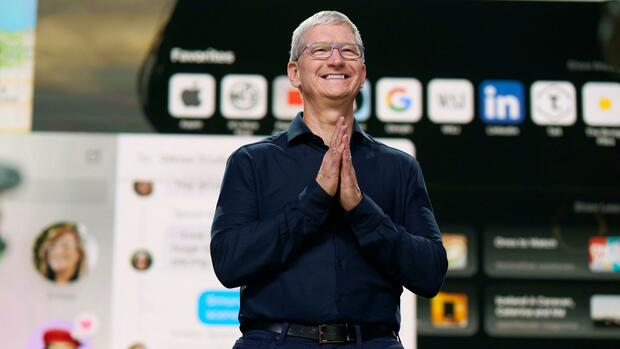 San Francisco Every spring, thousands of app developers from all over the world make a pilgrimage to the Apple developer conference in Silicon Valley to get to know the latest innovations for iPhone, iPad, Mac and Co. at first hand. But now the coronavirus pandemic has thwarted Apple’s disciples for the first time in 33 years.

Instead of attending Cupertino or San Jose, visitors had to join the Worldwide Developers Conference (WWDC) from home when CEO Tim Cook opened the four-day conference on Monday morning (local time) with a pre-recorded video. While Cook and other Apple managers introduced key innovations, this time there were no paid mood-makers in the front rows who cheered after each announcement.

The biggest innovations came, as is so often the case at the Apple conferences, at the end of the almost two-hour presentation: The company will be using its own silicon chips in Mac computers in the future and will end the 15-year era of Intel processors. Thanks to the company’s own new chips, Apple computers should run faster, use less energy and become safer, said software manager Craig Federighi. Software providers such as Microsoft or Adobe have already developed customized versions of their programs.

The first Mac computers with the new chips should come on the market at the end of the year. However, Macs with Intel chips would continue to be supported, and there would be “many years” of Macs with Intel chips. In fact, the company had only launched its Mac Pro supercomputer for $ 10,000 in December, which runs on Intel processors.

Apple is already developing its own high-performance processors for its mobile devices based on the architecture of the chip designer ARM. So far, however, as usual in the PC industry, chips from Intel with the so-called x86 architecture have been used in Apple notebooks and desktop computers. ARM processors are generally considered to be more energy efficient, which is particularly relevant for laptops and smaller notebooks.

The most important innovations

For the Macs, it is the third change in the chip platform after the transition from Motorola to IBM in the early 1990s and the change to Intel in 2005. At that time, Intel was still a giant in the IT market compared to Apple. They have now switched roles: Apple’s market capitalization is almost six times that of Intel.

Intel loses a prestigious customer, Apple in turn consolidates its power even more. In the future, all computers, tablets and smartphones from Cupertino will use the same underlying chip architecture.

In this way, apps developed for the smartphone and the iPad can also run on the new Mac computers in the future. “At Apple, hardware and software integration is critical to everything we do,” said CEO Cook.

Catching up with the competition

In addition, Apple presented a lot of nice but little sensational things on Monday. In the fight against the corona virus, a new function of the Apple Watch helps to ensure that users wash their hands long enough. The iPhone can replace the car key in the future – provided you drive the only compatible model so far, a new BMW. The wireless headphones Airpods come with a smooth transition between different devices and in the Pro version with a better audio experience.

But with many supposed innovations, Apple only catches up with the competition: The new sleep tracker of the Apple Watch has been standard at Garmin for a long time. The fact that the voice assistant Siri is now running locally on the smartphone instead of in the cloud has been the case at Google for a year.

The iPad now converts handwritten notes into printed words – an option that has been available at Microsoft for years. With Apple’s own SMS service iMessage – the most popular chat platform in the USA even before Whatsapp – users can now specifically respond to individual messages and address individual people in group chats – all functions that have long been standard in other chat programs.

Apple presented interesting innovations in terms of data protection. As is well known, the group likes to stage itself as an advocate of privacy in order to stand out from competitors like Google. With the innovations, Apple should make it harder for numerous third-party companies to earn money by collecting data.

With material from dpa.

More: Apple breaks away from the app.