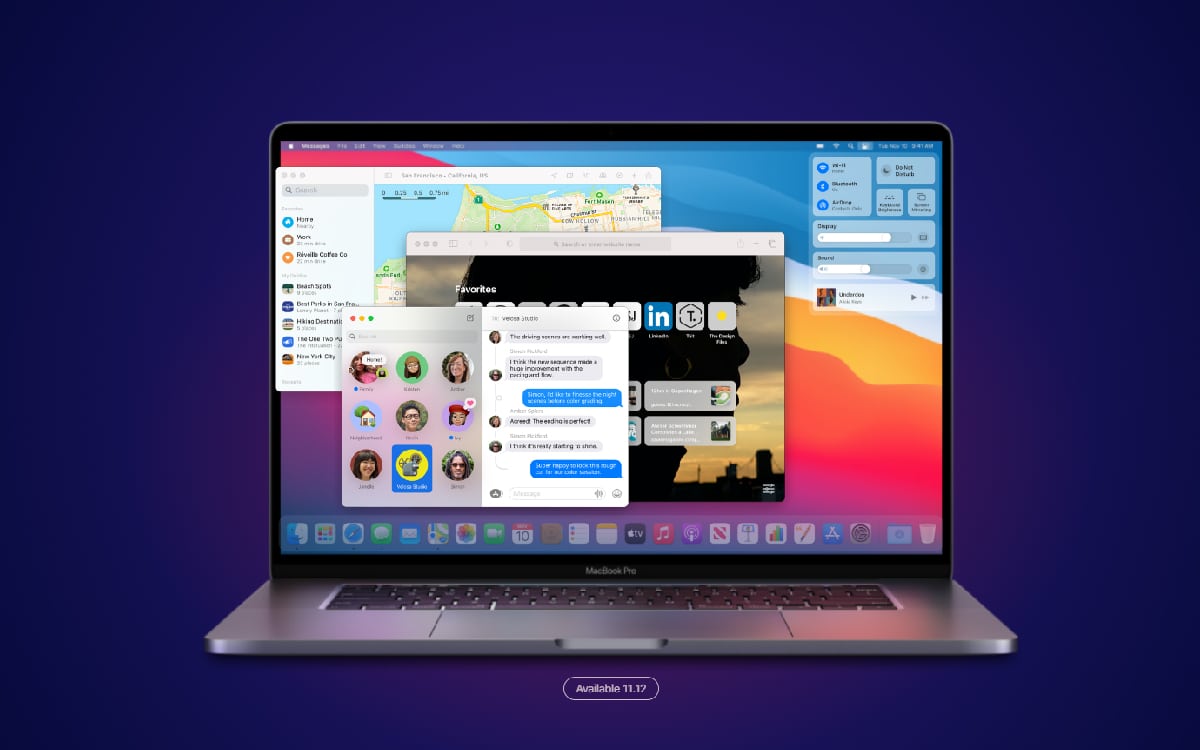 macOS Big Sur finally has a release date: November 12, Apple announced during its last keynote. For its new operating system, the Cupertino company was inspired by the design of iOS and boosted the performance of Safari. iMessage also got a few new features. To ensure the transition of its users to the new Apple Silicon processors, the brand has set up Rosetta 2, an emulator capable of launching applications for Intel processors.

The predictions were therefore true: Apple has indeed revealed macOS Big Sur, its new operating system for its computers equipped with processors Apple Silicon, during his “One More Thing” keynote. Release date scheduled for November 12. The firm also formalized its new chips, entitled M1, which will equip future MacBook Air, MacBook Pro and Mac mini. The latter is already proving to be above the Surface X Pro in the benchmarks.

Big Sur will therefore be available on the devices mentioned, but also on iMacs from 2014, MacBook Air from 2013, iMac Pro, MacBook Pro from late 2013, Mac Pro from 2013, MacBook from 2015 and finally the Mac mini from 2014. Redesign of its design, improvements to Safari and iMessage, Rosetta 2… Many announcements have been made. Summary.

The design of macOS Big Sur inspired by iOS

It’s hard not to see where the graphic designers at Apple drew their inspiration for the design of Big Sur. Rounded corners, bright colors, opacity effects : we immediately recognize the leg of iOS, which is even more obvious when we take a look at the application icons. The control center is almost the same as on iPhone and iPad. The buttons for Bluetooth, WiFi, and other settings are now in the center.

Apple’s desire for uniformity does not stop there, since the software all have a sidebar to their left used to make the different sections of the application accessible. Photos, Calendar, Contacts, Notes, Home, FaceTime, Music and Finder all had this new item added. 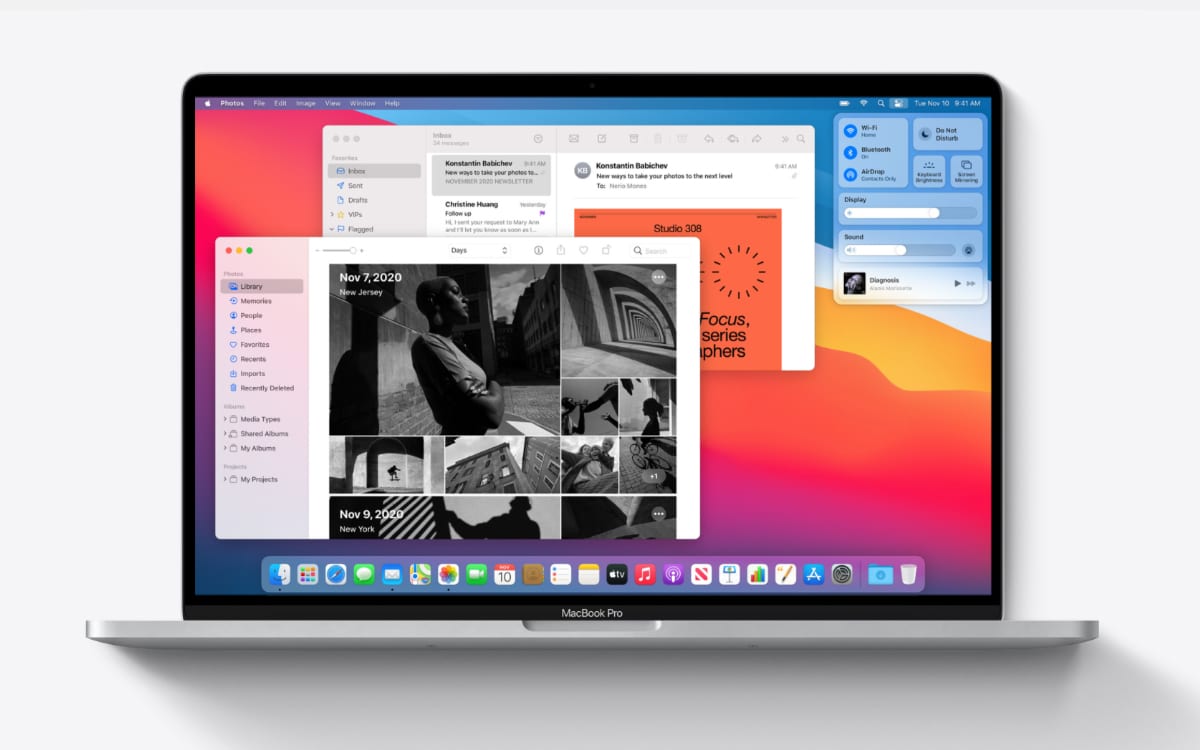 Apple did not go dead hand in presenting its browser, claiming it is now 50% faster than Google’s. The firm advances faster and easier management of frequently visited sites, as well as better autonomy with 3 hours of streaming video and 1 hour more browsing.

From now on, Safari also allows directly translate the text of a website thanks to a brand new integrated module. Apple also worked on data protection and privacy, making a report available on the activated cookies and tracers that it has blocked on the sites visited. The browser is finally able to notify you when one of your passwords are no longer secure, by analyzing the leaked databases. 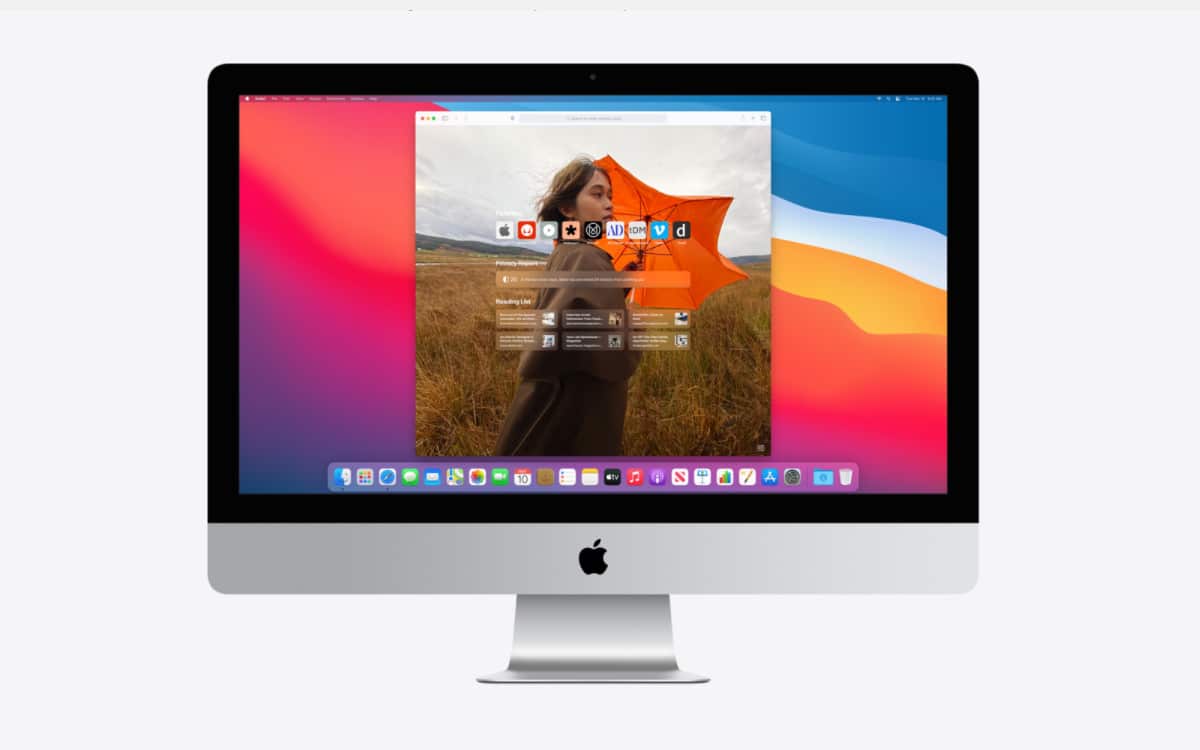 On the new operating system, iMessage offers new features to its users. They can now pin their favorite contacts, as well as quote a message of a conversation to answer it directly. Discussion groups will finally be able to dress in a photo a choice.

So far only available on iPhone and iPad, Memoji arrives on the Mac application to spice up conversations. Last addition, and not the least: it will be possible to search for message and media within a conversation thanks to a brand new search engine. 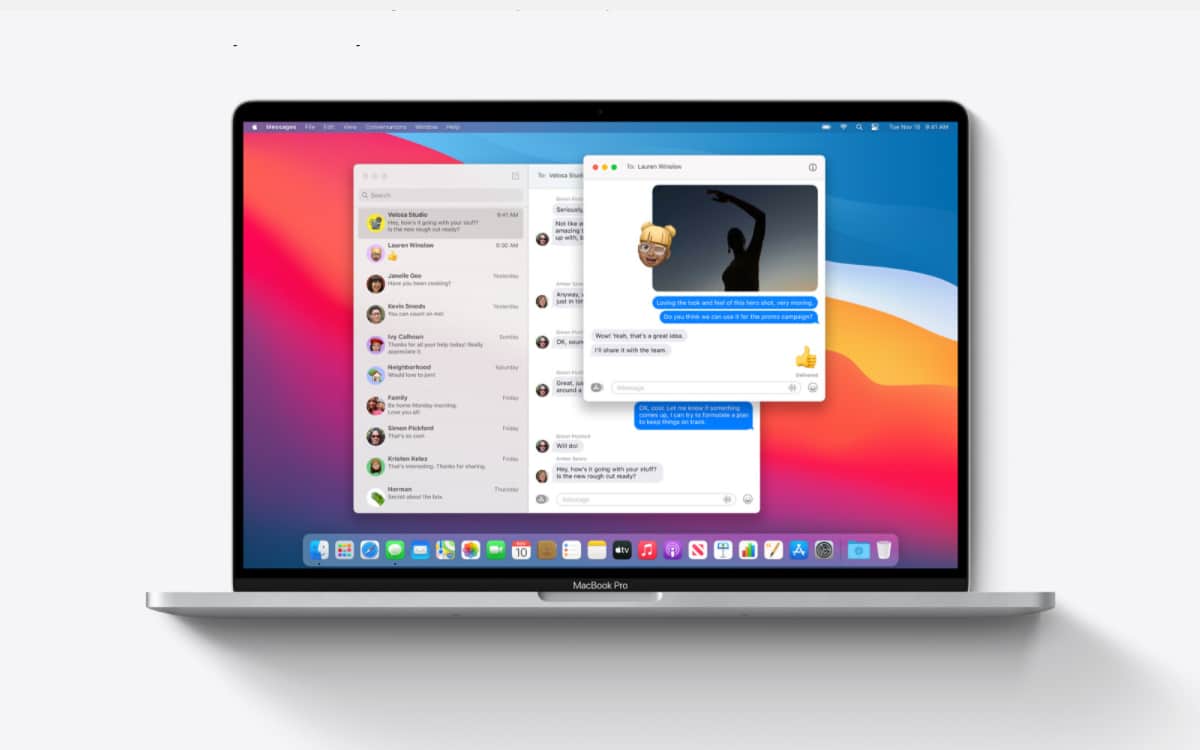 Universal applications and Rosetta 2 while waiting to switch to ARM

By canceling its partnership with Intel to manufacture its own ARM processors, Apple has had to review how its applications work. No worries, however, for users who have not yet switched to Apple Silicon: the firm has set up a system ofuniversal applications, which work on both types of processors.

While waiting for developers to adapt their software for Mac ARMs, the brand also offers Rosetta 2, an emulator giving access to applications running on an Intel processor, available on all Mac ARMs. Apple said in particular that the games and applications launched on Rosetta display better results than on Intel, thanks to the graphics cards of the latest computers from the firm.