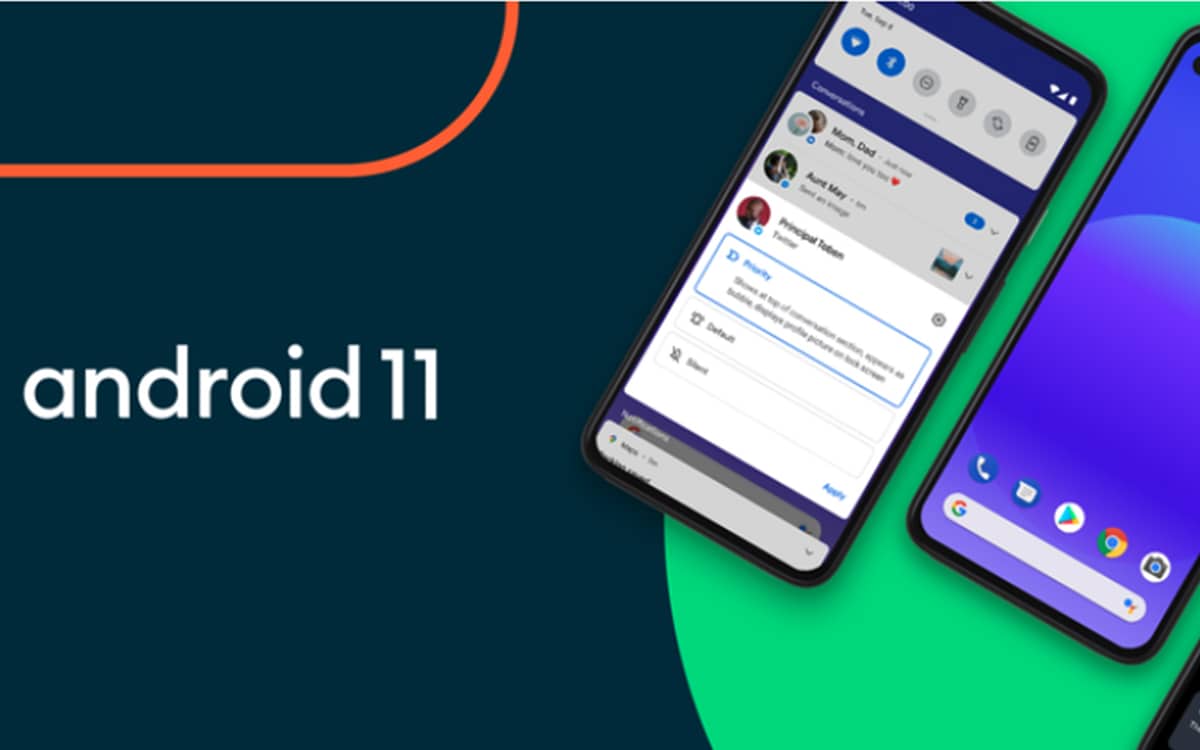 Android 11 is now available! True to its usual schedule, Google is rolling out the final version of the update to a handful of smartphones, including the Pixels. We take a tour of the main new features of this eleventh version of Android below.

This Tuesday, September 8, 2020, Google is launching the deployment of the Android 11 update in a stable version. In a detailed blog post, the Mountain View firm looks back on the main novelties of this iteration. According to Google, this update “Makes it easier to access what is important on your smartphone and allows you to better manage your conversations, your connected devices and your privacy”.

On the same topic: Android Auto – with this accessory, no need to wait for Android 11 to connect wirelessly

The major new features of Android 11

First, Android 11 signals the arrival of a new space dedicated to conversations (SMS, WhatsApp, Messenger…) in the notification center. This new section is flexible. Indeed, Google allows you to place a conversation with a particular loved one at the top of the list or to relegate a less important conversation to the bottom of the interface.

With Android 11, Google finally offers Facebook Messenger-style floating notification bubbles. From now on, all messaging applications will be able to offer to place your current conversations in bubbles. You will no longer need to constantly return within the application to reply to a new message.

Android 11 now natively integrates video screenshots. To start a recording, just go to the quick settings of your smartphone in the ” screen recording “. The icing on the cake, the mobile OS gives you the choice of recording sound with the microphone of your smartphone or a device, such as headphones for example.

Android 11 also improves the way in which users manage all their connected objects (bulbs, thermostat, alarm, Chromecast, etc.). Google has developed an interface that brings together all the devices in your home. To access it, just keep your finger pressed on the unlock button on your smartphone. On this side, Android 11 is reminiscent of iOS and its Home application dedicated to connected objects and home.

The update also adds of universal playback controls in the Quick Settings panel. Now it’s also easier to switch between audio output devices (from your Bluetooth headset to a connected speaker, for example), whether through quick settings or when your phone screen is locked.

As expected, all Android smartphones are now able to wirelessly connect to Android Auto. No need to go through a USB cable to connect your phone to your car. For the moment, only 500 car models are compatible, says Google. To check if your vehicle is compatible, go to this address.

Unsurprisingly, Google is also looking to better protect the privacy of its userss. Android 11 in fact incorporates a one-time authorization system. You will be able to choose to share your location, access to your microphone, your camera with a third-party application once. “The next time the application needs to access this data, it will have to ask for your permission again” Google explains. Similar security is found on the latest versions of iOS.

In the same vein, Android 11 will regularly reset permissions granted to apps. If you haven’t opened an app for a long time, then you will need to re-grant your permission for it to access sensitive parts of your smartphone.

Finally, Google assures that the update improves the way security fixes are deployeds. Now, updates for 22 Android modules are offered directly through the Play Store. “You will get these fixes as they become available, without having to wait for a full operating system update.” Google says. The arrival of certain security patches therefore no longer depends on the responsiveness of manufacturers.

Android 11 is being deployed on these smartphones

Like always, Google deploys Android 11 update as a priority on its Google Pixel smartphones. This year, the Pixel premier of the name is not compatible with the mobile OS. Other smartphone brands have announced the imminent arrival of the update on their devices: OnePlus, Xiaomi, Oppo and Realme. Hours after Google’s announcement, Xiaomi announced the deployment of Android 11 on the Mi 10 and Mi 10 Pro. To find out more, we invite you to consult the list of smartphones compatible with Android 11.