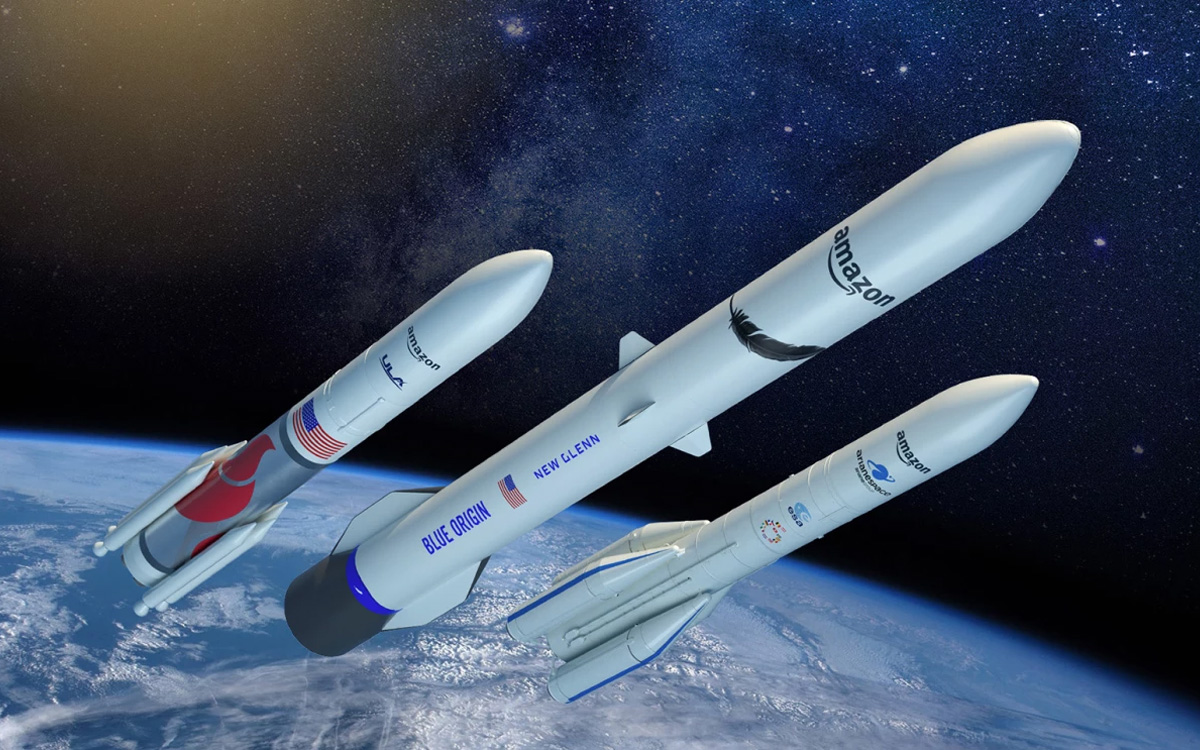 To hope to catch up with the accumulated delay against Elon Musk’s Starlink, Amazon has just signed several contracts with three major aerospace companies. Indeed and to ensure the sending in low orbit of its 3236 satellites, the American giant offered the services of ULA, Arianespace, and BlueOrigin, the company of Jeff Bezos.

Since 2019, Amazon has announced its ambitions to become a satellite internet service provider, like a certain Starlink, the service powered by Elon Musk’s SpaceX. To provide the means, the American e-commerce giant has already announced that it intends to invest 10 billion dollars to send more than 3,000 satellites into low orbit.

A short time ago, the French premises of Kuiper also opened their doors in Clichy, and we find at its head Philippe Daly, responsible in particular for the development of Alexa, Amazon’s voice assistant. And while Starlink has been available in France since May 2021 now, the American company formerly led by Jeff Bezos has decided to move up a gear.

Indeed, the Seattle firm announces this Tuesday, April 4, 2022 the signing of several contracts with big names in aerospace, namely the American ULAFrench Arianespace and Blue Origin, the company of Jeff Bezos. These three companies, specializing in rocket development and launchwill help Amazon send into low orbit the 3,236 satellites which will constitute the constellation of the Kuiper project, Amazon’s satellite internet service.

For non-connoisseurs, ULA or United Launch Alliance is the designer of the American launchers Atlas, Delta and the future Vulcan. Arianespace has recently unveiled Ariane 6its next-generation rocket, while Blue Origin has already distinguished itself in the past with New Shepard, a reusable single-stage rocket that you saw during the first manned flight into space in July 2021. Jeff Bezos was doing part of the crew.

These agreements provide for up to 83 launches spaced over a period of 5 years. “Securing launch capability with multiple vendors has been a key part of our strategy from day one,” says Rajeev Badyal, vice president of technology for the Kuiper project for Amazon. According to the statements of the giant, it was imperative to use the services of several rocket operators to hope to catch up with Starlink, which has been deploying its constellation for three years now.

A solid gold contract for Arianespace

In details, Amazon has ordered 18 Ariane 6 rockets from Arianespace to put some of these satellites into orbit (35 per launch). “A great moment in the history of the company”, welcomes Stéphane Israël, executive president of the company, in the official press release from Amazon. It must be said that with this contract, Arianespace brings together the best conditions for meet its objective of 11 flights per year with Ariane 6. The course to reach profitability. With these agreements, Arianespace can already rely on six flights per year with Amazon alone.

The American ULA will obviously take its part, with no less than 38 launches planned via the Vulcan rocket from the Cape Canaveral site in Florida. For the occasion, a second launch platform will also be built to proceed “to high-speed operations” with the Vulcan Centaur heavy launcher.

We then find and without great surprise Blue Origin. Jeff Bezos’ company will take care of twelve launches with New Glenn, the famous heavy launcher reusable 25 times. Note that Amazon has also taken an option for 15 additional launches, here again from the Cape Canaveral launch pad. Regarding the total amount of money spent by Amazon, it is kept secret but according to many specialists, such an investment easily exceeds the 10 billion dollars.

To hope to hold the dragee high at Starlink, Amazon wants to rely on its experience in key sectors, namely logistics of course and above all l’infrastructure cloud de Amazon Web Services, without forgetting the production of hardware. On this subject, Amazon is still working on the kit that will be provided to users of the Kuiper project. The objective being to offer something less imposing and less expensive than that of Starlink, whose the price is set at €499 in France.

After years of struggle to develop a reliable and handy antenna, Amazon would however have developed the miracle solution with a miniature antenna only 30 centimeters wide. Regarding the deployment of Kuiper, it should not start before 2023, or even 2024/2025.