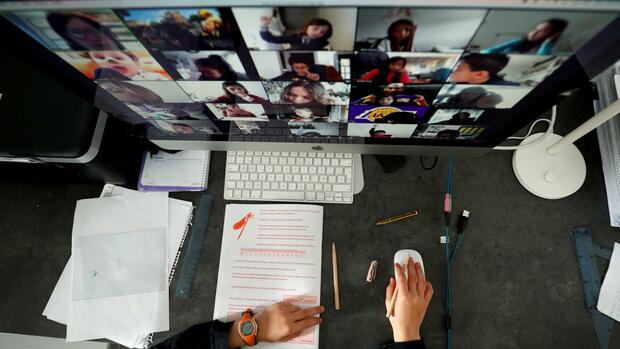 Dusseldorf The corona crisis has forced many people to stay at home in recent months. This has given companies such as Zoom, Slack and Netflix, which make work in the home office easier or make exit restrictions bearable, a special boom. The use of such services is at a record level in the first half of the year, and stocks in this “stay at home” category – as the stock market jargon is called – are in demand as never before.

But Amazon Web Services (AWS) benefits from this development at least as much. The cloud division of the US retail giant offers IT services such as storage, computing power and software from data centers all over the world, available as needed and paid for according to usage.

In the exceptional situation, many customers make use of it: expenditure on cloud computing will grow by 19 percent this year, as the Gartner analysis house predicts. The market leader also benefits massively from this.

Werner Vogels, chief technology officer at Amazon, does not see this as a temporary phenomenon, but as an irreversible trend. The corona crisis made access to digital services “absolutely necessary for everyone,” he told Handelsblatt on the sidelines of the AWS Summit virtual customer conference that took place this week: “A significant shift” to the cloud could be observed among customers. This is an opportunity for AWS to make itself indispensable.

Amazon is a pioneer of cloud computing. The management of the online retailer found that in-house teams spent a lot of time developing new services building the IT infrastructure. So the company developed some elements that all employees could access.

In 2006 the group started to offer these services to external customers under the name Amazon Web Services. With great success: Today AWS is the market leader, generating sales of more than ten billion dollars in the first quarter.

Scale at the push of a button

Since then, the sales arguments have always been the same: Instead of investing in expensive infrastructure themselves, the promise is that customers get IT services at the push of a button. However, they are currently gaining weight, for example when it comes to scaling, as the simple ramping up and down of capacities in the IT industry is called. “We are currently seeing both: customers who need a lot of additional capacity and customers who need to drastically cut costs,” says Vogels.

On the one hand, there is Zoom, for example: When numerous companies moved to their home office and yoga trainers and guitar teachers suddenly needed alternatives for personal contact, the capacity of the video conference service grew by a factor of 20. It was a “huge undertaking” to create the capacities for this CEO Eric Yuan recently reported. AWS provided the majority of the new servers, some of them several thousand a day.

Zoom has now signed an extensive contract with Oracle to expand its own server capacities, but will continue to use AWS in the future. Other companies also rely on the cloud service provider, Netflix, Disney and Hulu, for example, although they compete with Amazon Prime for their video services, or the game providers Epic Games and Sony, to name just a few. Head of technology Vogels also sees opportunities in e-commerce, in the health sector or in the media and entertainment industry.

On the other hand, there is Tui: The travel group’s business collapsed due to the massive restrictions on public life, and it is only slowly returning to normal. The IT department, which had previously worked with AWS, then adapted the infrastructure and, according to the company, achieved cost savings of more than 50 percent.

Vogels says that other companies in the tourism industry, such as Airbnb and Expedia, could also benefit from this: “They have complete control over their infrastructure,” he promises.

AWS does not develop its own products for dealing with the pandemic, says Vogels. The company does help customers with the introduction of services. These are cases that the company likes to talk about, such as when a city in Lombardy runs a call center on the infrastructure to answer questions about the corona virus.

The cloud platforms master more and more complex tasks. They used to be like warehouses for data, but now they are factories. In addition to the software for call centers, AWS also offers a virtual work environment and a video conference solution. AWS boss Andy Jassy once summed it up in the Handelsblatt newspaper: Most of the IT “will go to the cloud”. With which his company would become part of the business processes – and therefore indispensable.

The chance is there. “The corona situation has simply wiped out prevailing objections to cloud computing in general and AWS in particular to many decision-makers,” observes Axel Oppermann from the analysis and consulting company Avispador in Kassel.

Concerns about costs, security or functionalities are no longer in the foreground, the analyst says. The main thing is that the data center and the software continue to run – “business continuity” is the catchphrase. And the main thing is that it is possible to quickly introduce new technologies that make it easier to deal with the pandemic.

The crisis is therefore “a long-term driver” for AWS as well as for the other hyperscalers, says Oppermann, i.e. the other major cloud service providers Microsoft, Google and Alibaba.

However, the competition is growing. With the Azure platform, Microsoft has narrowed the gap to the market leader AWS and recently also won a prestigious and profitable order from the Pentagon. The group, which once grew up with software such as Windows and Office, is particularly strong when it comes to solutions for the home office.

In April, he reported 75 million daily users to his teams collaboration service, twice as many as in March. The corona crisis brought as much digitalization in two months as it did in two years, said Microsoft boss Satya Nadella.

Amazon’s cloud division generates a large part of the profits.

Microsoft has transferred the supremacy with the productivity solution Office to the cloud, says Avispador analyst Oppermann. With the “Microsoft 365” service and virtualization solutions, for example to use the work environment via the cloud, the group will also master large areas of the “Working from Home” market.

A deal with Slack is said to help AWS narrow the gap. The communication service for companies benefits from the relocation of work to the home office. Nevertheless, he is under pressure: Microsoft markets its software teams as an alternative, which also masters video conferences and voice calls, often as a free addition to a software package.

To keep up, Slack has teamed up with AWS. The communications service will use Chime, the technology for voice and video conferencing, to be able to offer a complete package. It is a prestigious deal for both parties.

Amazon is generally cautious about the competition. Werner Vogels does not want to get involved in this discussion either. “From day one, we knew there wasn’t going to be just one winner in the cloud business,” he says. There is still a lot of potential: “The IT industry still has a long way to go.”

More: “Moonshot” Gaia-X – The most important questions and answers about the European cloud