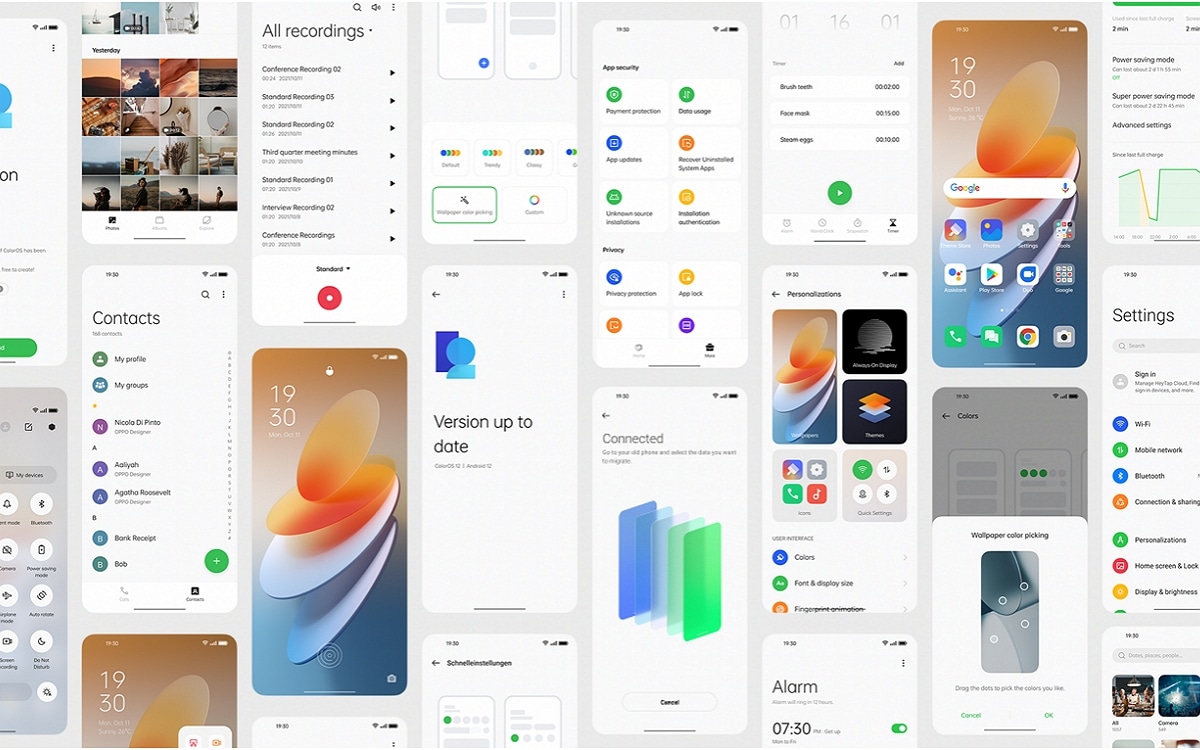 OPPO has unveiled the new version of its overlay for smartphones: ColorOS 12. Based on Android 12, it brings some new features to OPPO smartphones, and suggests what OnePlus has in store for its smartphones.

While various manufacturers like Samsung will soon roll out their Android 12-based overlays, OPPO is already starting to roll out ColorOS 12 on some of its smartphones, like the latest Find X3 Pro 5G. OPPO aims to provide users with an experience close to stock Android, along with rich user interface features that boost productivity and enrich the user experience.

To read also : ColorOS 12: here is the list of devices compatible with the OPPO overlay

An even more customizable design and AR Emoji

First of all, with ColorOS 12, OPPO is emphasizing its new “Infinite Design”. The latter does not look like Google’s Material You, which will arrive with Android 12 on the Pixels. Indeed, it brings new acrylic icons, increased contrast and ” distinctive color shades “. There is also an Omoji feature that works similarly to the AR Emoji feature on some Samsung smartphones. The latter allows users to create their own Custom 3D avatar, which can mimic their facial expressions in real time.

There is also the new Always-on Display 2.0 function, an improved version that allows users to place their 3D animated Omoji right on their lock screen.

A new Smart Sidebar and connection from a computer

Oppo has decided to overhaul the Smart Sidebar. The new version incorporates new tools, such as a price comparison when you shop online, or an online song recharge feature when using the Music Player app.

Thanks to ColorOS 12, users will also be able to discover PC Connect, a feature allowing access to their smartphone from a computer. OPPO promises a 45 Mb / s transfer ratewhich means you can send around 500 photos from your phone to your PC in just one minute.

OPPO also hopes that thanks to the optimizations made to its overlay, your phone will still be fast and smooth 2-3 years after purchase. OPPO claims that it occupies 30% less storage space than ColorOS 11, and that it could also lead to 20% increase in battery life.

One of Oppo’s top priorities for ColorOS 12 is to make design more inclusive for different regions and languages. This means adjusting the spacing and design so that when app titles appear in languages ​​that have longer words, these appear correctly.

The presentation of information from the different interfaces of the application has been reorganized to make them more intuitive and easier to use. In addition, it has been made more adaptive so that it can adapt to all sizes and scales of phone, so we imagine that OPPO’s first folding smartphone should arrive shortly.

OPPO will take advantage of ColorOS to add the security features of Android 12. This means that you will find the privacy dashboard, but also microphone and camera indicators to let you know when an app is using them.

The update also includes new accessibility features added to Android 12. Finally, OPPO should now use Google’s apps instead of its own, and should therefore delete its own Messages, Phone or Contacts applications.

Which smartphones are compatible with the update?

OPPO has already communicated the deployment schedule for its ColorOS 12 update based on Android 12, and here are the smartphones that will receive it: