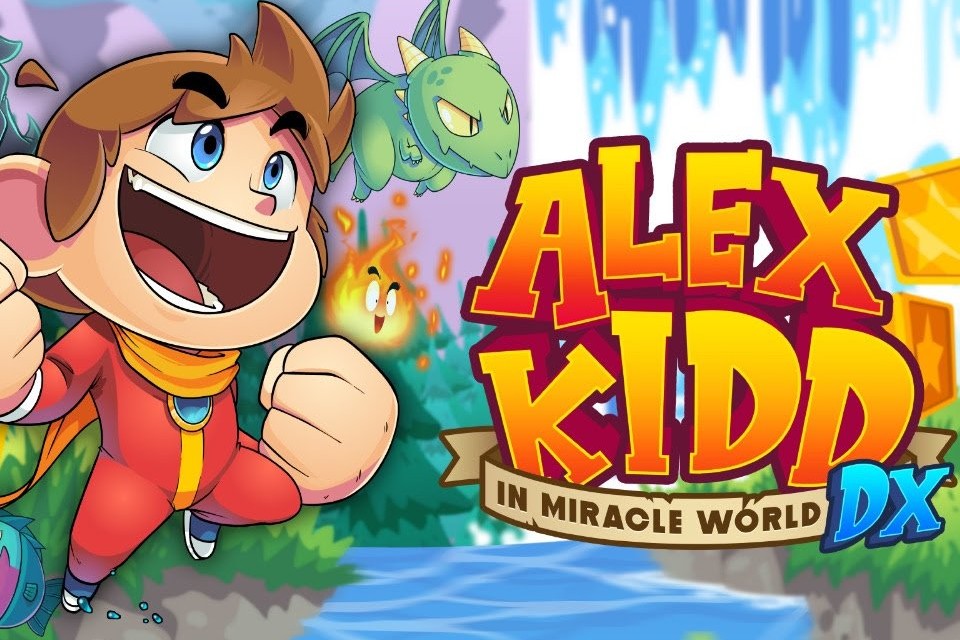 Our younger readers may not remember or even know this, but Alex Kidd was once one of video game’s greatest heroes and SEGA’s main mascot! In the days of Master System, the big-eared kid was on the rise and starred in several of his own adventures, spin-offs and even crossovers with other games from the producer.

But Alex Kidd ended up losing almost all of his space after SEGA released Sonic the Hedgehog on the Mega Drive. After that, apart from a last solo venture in the same generation, the character was limited to making the occasional rare appearance as a supporting role in sports games, seeming doomed to oblivion.

Behold, in June 2020, Jankenteam and Merge Games announced Alex Kidd in Miracle World DX, a remake of the most celebrated hero game! Made by fans and for fans, it looks like a bespoke title to keep any old-timer player grinning from ear to ear. At the invitation of his national advisor, we had the opportunity to pre-play three phases of the game and immerse ourselves in nostalgia. Check out our first impressions below!

A relic from another time

The good news is that Alex Kidd in Miracle World DX is extremely faithful to the game originally released in 1986. And the bad news is… precisely its incredible fidelity, as this is something that can end up alienating a good portion of the public, more used to modern action and platform games, whose rhythm and structure is completely different.

Alex Kidd is a relic of other times, with a high dose of difficulty, enemies that kill you with just one hit and force you to return to the beginning of the stage, and a very sensitive hitbox that requires a lot of precision, learning, trial and error until be totally dominated.

After all, except for very rare power-ups, the bulk of the combat is done with the hero’s own fists, which emblematically grow when throwing punches. As much as some quality of life improvements have been applied, this is still essentially the same game as more than three decades ago, with all the good and bad that that means.

In the test build we received it was only possible to play three phases: Monte Eterno, Marmórea Plains, and Aldeia de Namui, all located in good Portuguese. They represent, respectively, the first two phases of the original game, and another more intermediate level. Together, they end up serving as a good sample of all the mechanics that await you on your journey. 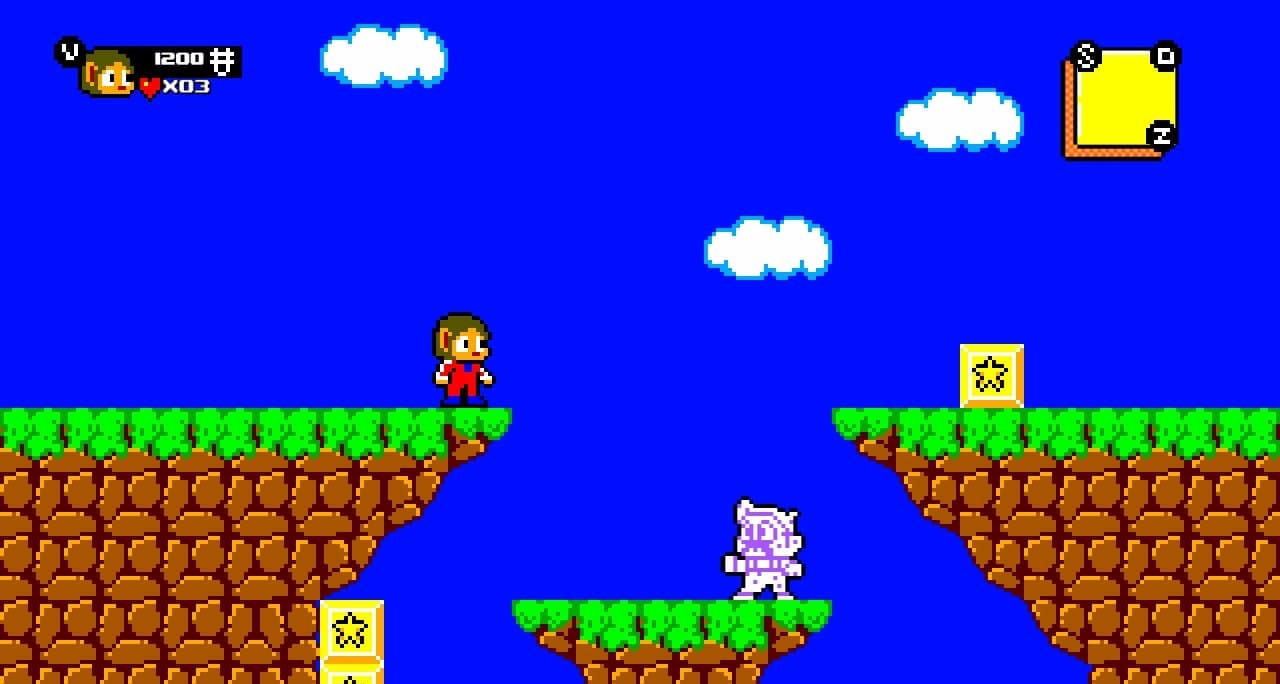 The DX version running the first game screen with a retro look, keeping the quality of life improvementsSource:  SEGA

Monte Eterno is one of the most interesting and striking levels precisely because it throws players straight into a level with a vertical scroll, where Alex needs to go down a mountain full of enemies. Here you will discover how the different blocks of the scenario work, from those that stun Alex for a few seconds to the colorful platforms that can randomly summon powers or even death, which will relentlessly chase the hero until it takes his life.

The coolest thing is that at the end of this descent the same level turns into a water phase. Unlike other titles at the time, I always found Alex Kidd’s marine gameplay really good and fun, and it was great to be able to relive his swimming mechanics, battling enemies as we went up and down the screen with precision.

Although the Marmóreas Plains can be played on foot, the fun here is to enter the first shop in the scenario and buy a motorcycle. With it, the hero can cut the scene at full speed, automatically breaking blocks in his path and becoming invulnerable to enemies. The vehicles’ only weakness is the red blocks: a light touch on them is enough to lose your ride. 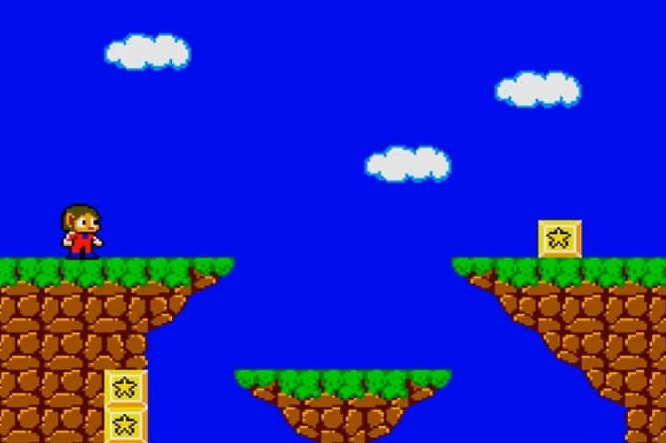 The same screen seen in the original game. Note the low resolution, lack of NPC and lack of visual cues about Alex Kidd’s items and livesSource:  SEGA

The game offers two types of bosses at the end of some levels: in the Plains, your challenge is to win rock-paper-scissors matches on a “best of three” system, while the final clash in Namui Village is against an ox that runs non-stop from left to right across the screen, in a very predictable pattern, just by hitting him with a few punches or, better yet, equipping a ring to be able to fire long shots in order to defeat him.

Anyone who lived through the 1980s in all its videogame glory must already know everything we talked about in the previous subtitle by heart, but what’s new for these people in the version DX? For starters, as familiar as it all is, the game is not an exact 1:1 replica of the original. The game screen has been updated to show you more clearly how many lives you have left, and to indicate if you have any equippable items.

Minimal dialogues have been added here and there, with even a few petrified NPCs to interact and learn a little more about the game’s history. As most dialogues are optional, this doesn’t disrupt the pace of the adventure at all and turns out to be a welcome bonus. 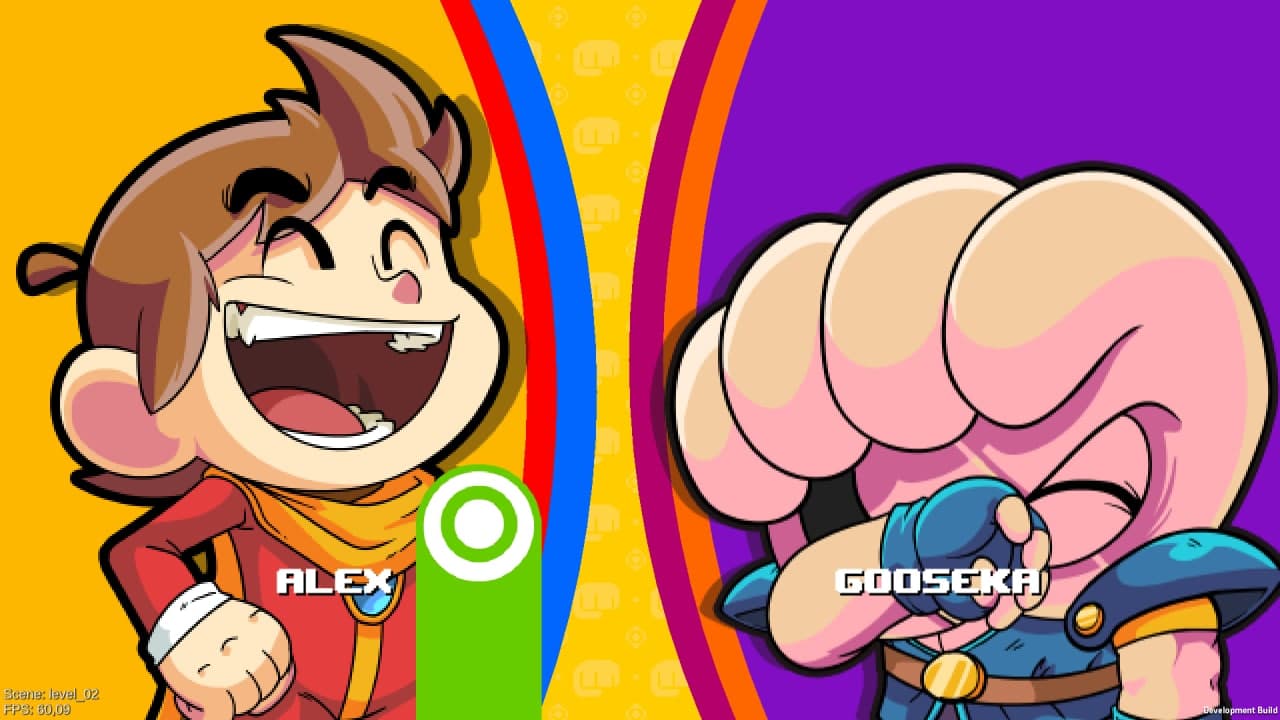 Naturally, the whole look has been redesigned, with more vibrant backgrounds giving way to the old almost monochromatic backgrounds. It’s not something that will take your breath away or redefine our standards of visual excellence, but the art direction fits well with the expected tone in Alex Kidd’s universe.

What pleased me most were the little transition scenes. There, the cartoonish look catches the eye and it’s hard not to feel captivated by the cuteness of Alex and even his enemies, whether in the scenes where the hero eats a rice ball between stages or celebrating his victory in jokenpo.

With just one click you can switch between more modern and classic graphics, but the transition is not as fast as seen in other recent remakes like Diablo 2 Resurrected, which instantly jumps between the traditional and the latest look. Here, it loads just under a second during the on-screen transition.

When jumping between the two versions, the soundtrack also changes. As a big fan of composer Tokuhiko Uwabo’s classical work, I didn’t like the re-imaginings of his songs so much, but maybe it’s pure nostalgia speaking here, as I’ve spent hundreds of hours of my life listening to classical material. I hope that in the final version it’s possible to mix the modern look with the original soundtrack.

As this demo was very quick to complete — something natural considering that the Master System game is also very short — it ended up getting that little taste of wanting more, but also a certain fear that the final product will not be so pleasing to those players. who were no longer fans of Alex Kidd before starting the game.

We’ll see how the final product will fare on June 24, 2021, when Alex Kidd in Miracle World DX will be released for PC, Nintendo Switch, PlayStation 5, PS4, Xbox Series X|S and Xbox One. How are your expectations for the game? Comment below!