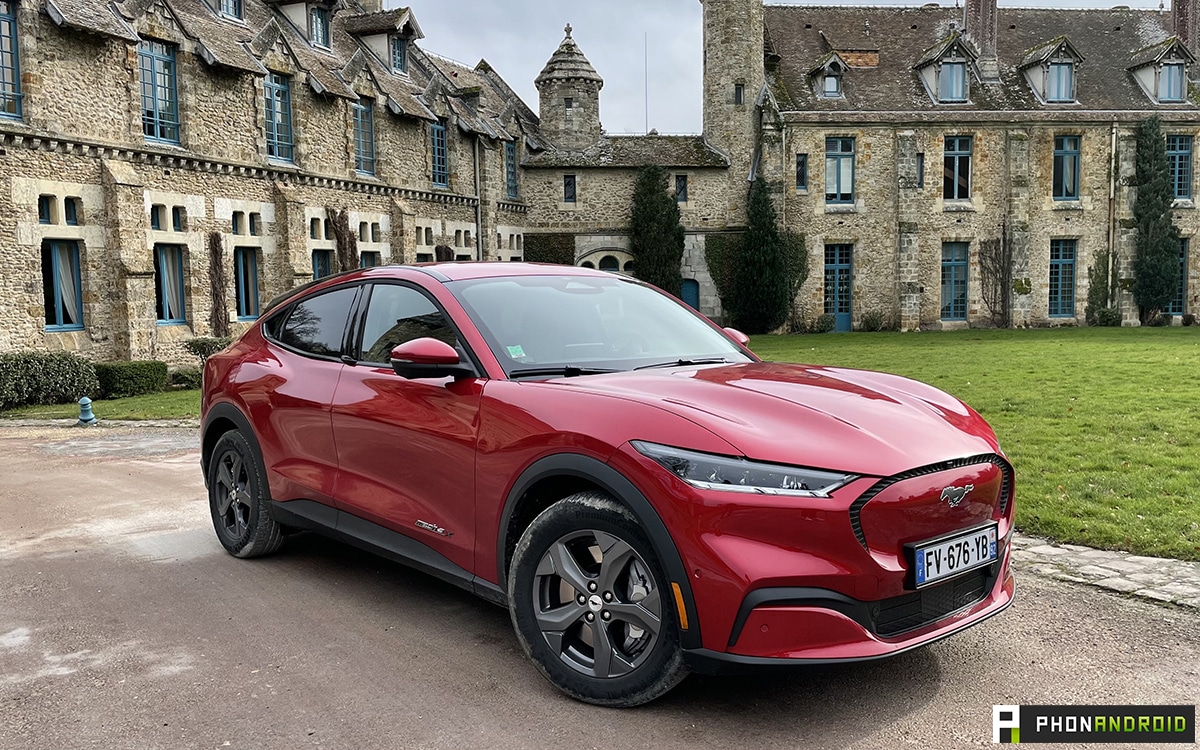 Long-awaited, Ford’s first 100% electric SUV will hit our roads in the coming days. We were able to try it out in extreme conditions, covering over 2,000 km. 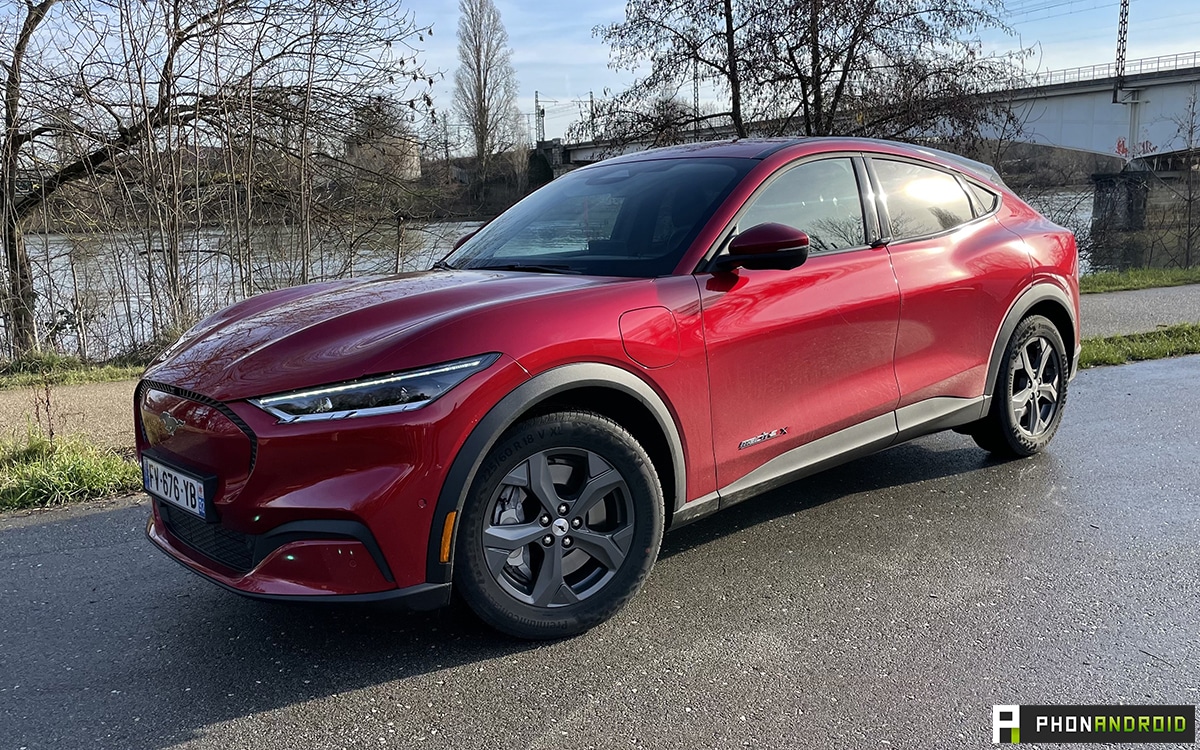 We expected it at the end of last year, but we had to wait until March for the Ford Mustang Mach-E or finally available in concessions. Unveiled in 2019, the first 100% electric SUV of the American brand had made a lot of talk by adopting the legendary name of Mustang. An aberration for some fans of large V8s when others, more prosaic, were not moved in the era of EPZs (low emission zones). 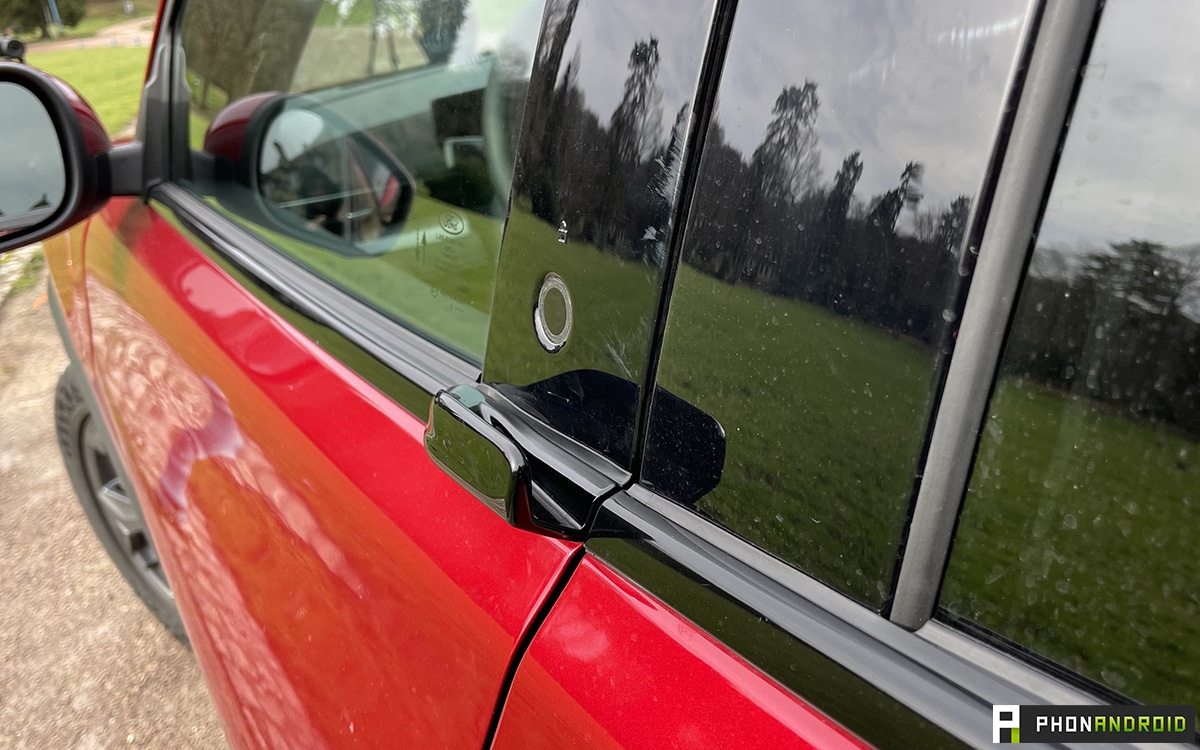 A daring bet for Ford, but which ended in record bookings from the opening of pre-orders of the Mustang Mach-E: more than 32,000 reservations confirmed at the end of January 2020, and even 40,000 copies a month later. Not to mention the 1st Edition version of which all copies were reserved in just one month. 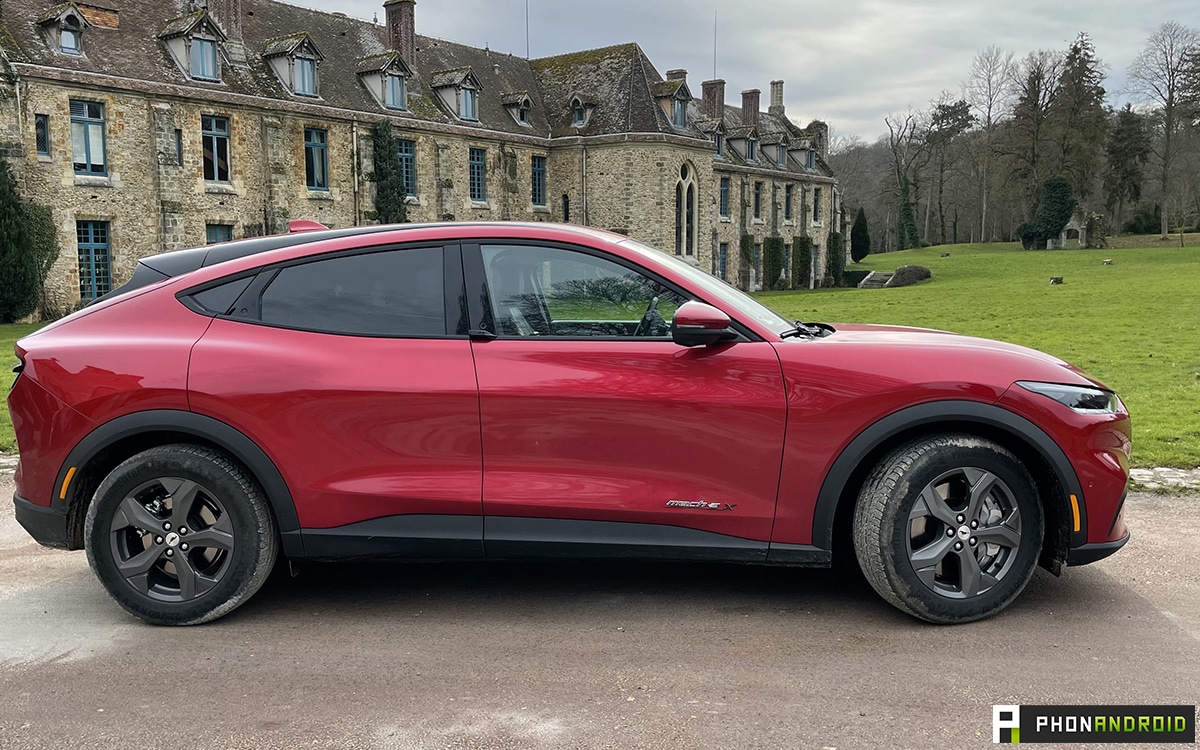 A family resemblance to the Ford Mustang Mach-E

We must admit it, the first photos did not always do justice to this new kind of Mustang. But once in front of the vehicle, the charm operates, especially in this beautiful metallic Lucid red livery of our test model. Anyway, those allergic to SUVs will certainly look elsewhere, while others will enjoy finding the nods to the coupe. And there are many, like the ribbed hood or the rear headlights for example. 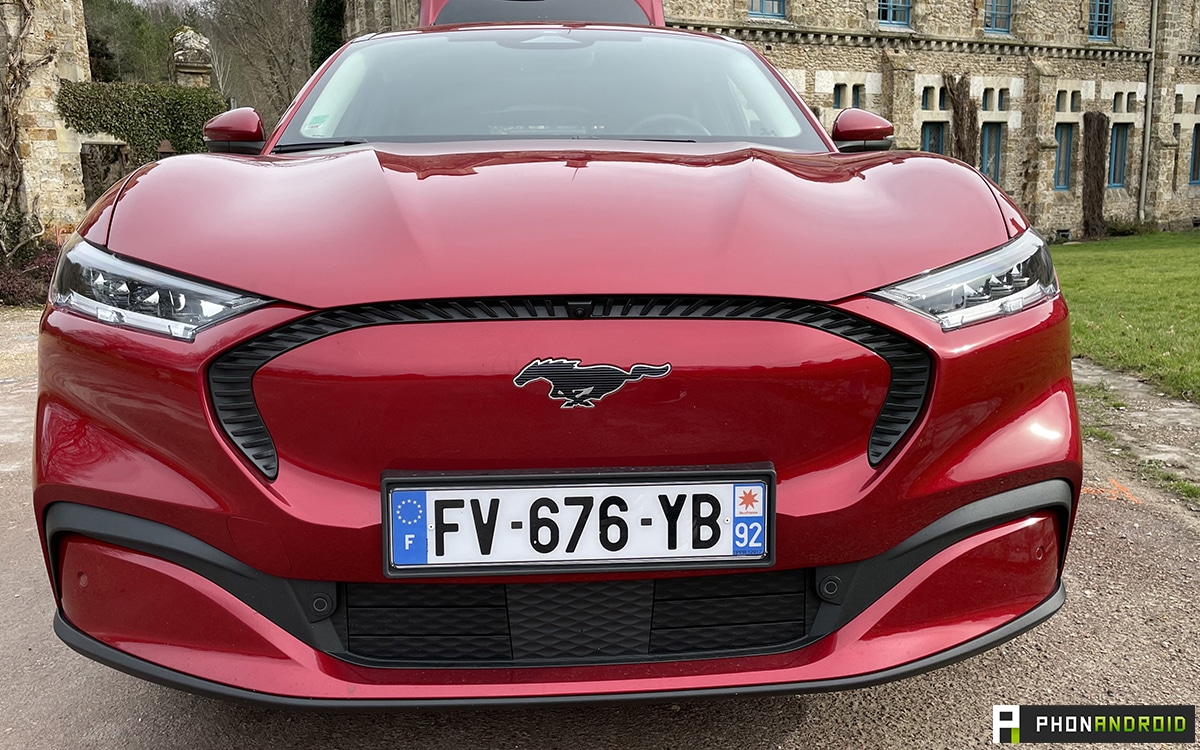 The machine imposes on the road and stands out in particular with its elusive line. The front is characterized by the imposing solid grille which is adorned with the famous horse. Despite its dimensions (4.713 m long, 1.881 m wide and 1.597 m high), the Ford Mustang Mach-E can be tamed in a few turns of the wheel.

The manufacturer had the good idea to keep the traditional mirrors rather than trying everything digital, with the hiccups that can sometimes cause. As on the Audi e-tron, an option that we do not recommend. On the other hand, the mirrors were not foldable on our test version. This is not without posing some problems to be sure to have locked the car without using the key. 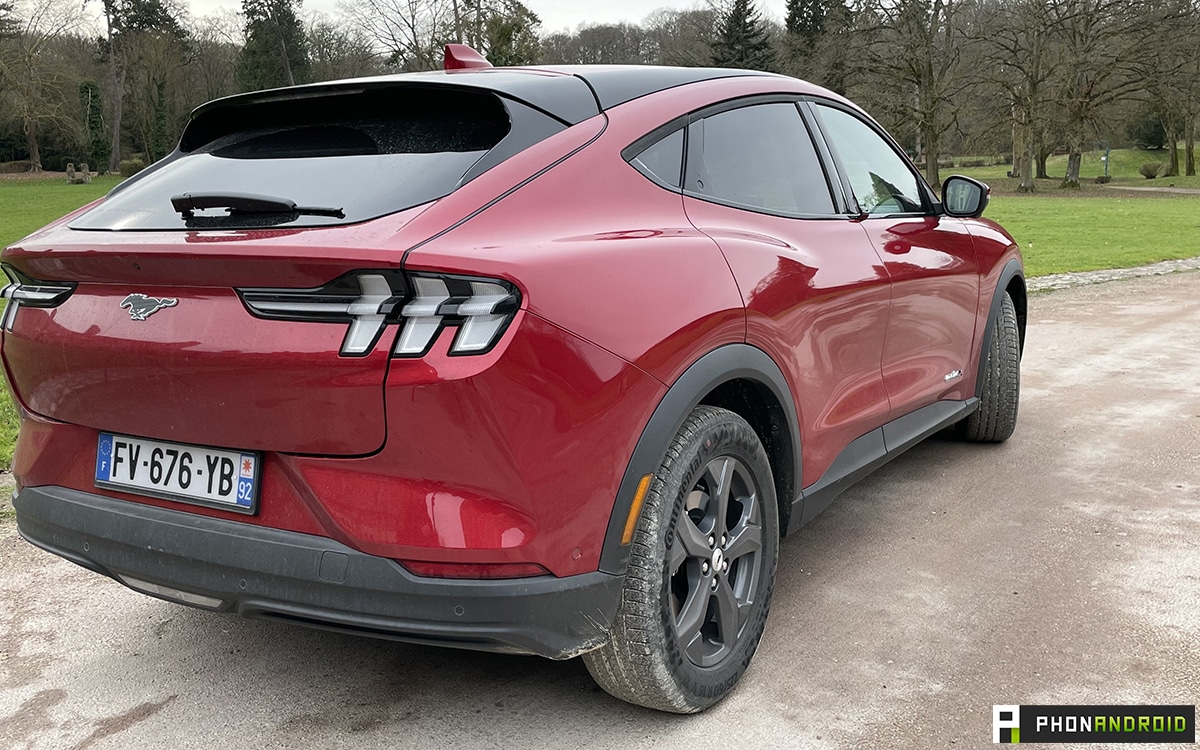 About opening, the Mach-E is devoid of conventional handles. Very discreet, they allow the door to be pulled, which opens automatically by pressing the E-Latch button which is integrated just above. Another solution, the Phone as a Key function with your smartphone. Once the latter is paired in Bluetooth with the car, it can stay in your pocket and act as a key all that is most classic.

Finally, it is also possible to program an emergency code that will be entered on the numeric keypad located on the driver’s door pillar, and which also allows you to start the car. 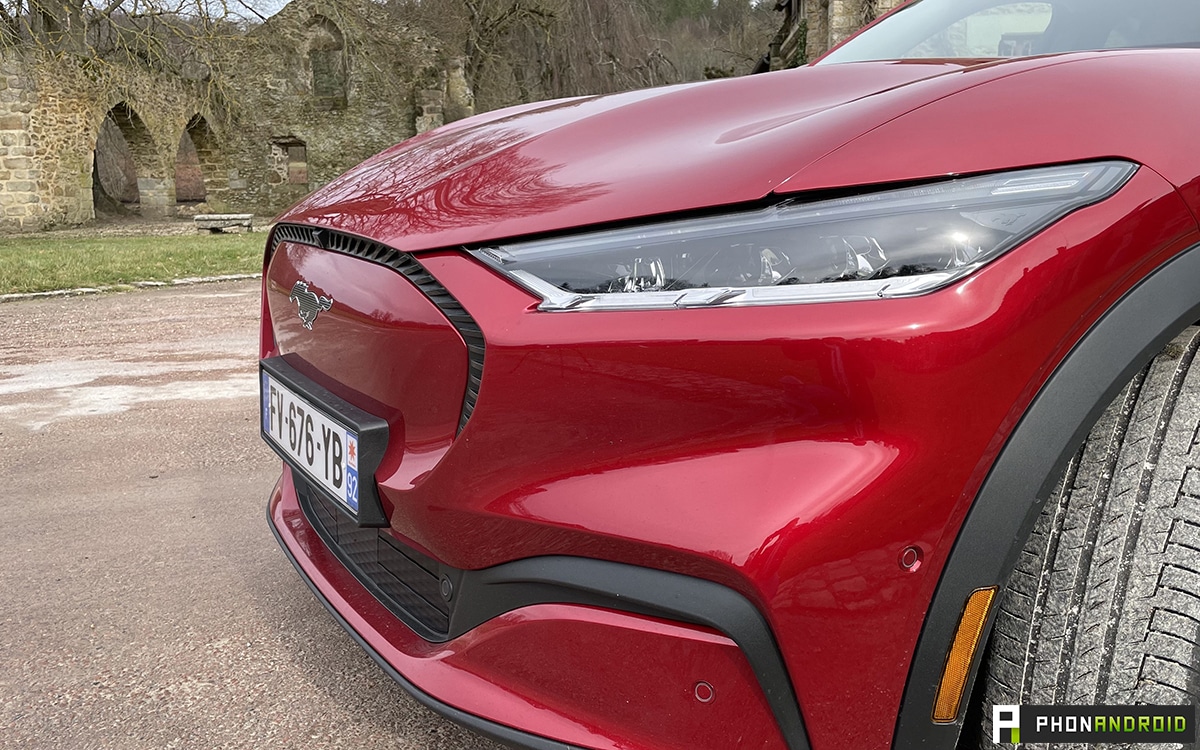 The interior of the Mustang Mach-E

Once in the cockpit, it is inevitably the large 15.5-inch vertical display that catches the eye. But before we dwell on it, a word about the finish of this new Ford Mustang Mach-E. Against all expectations, the manufacturer has taken good care of his copy with quality materials and careful assembly. The Mustang Mach-E is not stingy with foamed plastics, and other fabric door trim, reminiscent of the B&O sound bar which is integrated into the dashboard (optional with the Technology Pack). However, all is not perfect with some misfires like coarse plastic door sills, or the volume control dial at the bottom of the screen which is, again, a little cheap plastic. 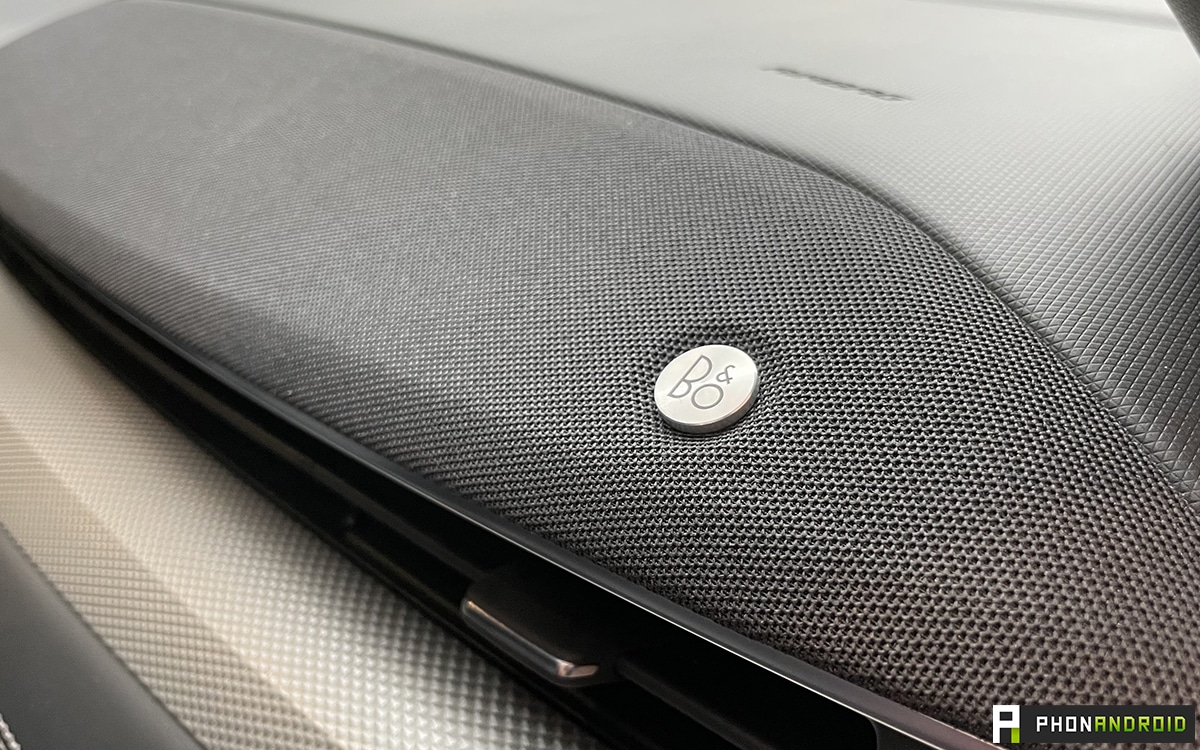 The seats are welcoming and contribute to the excellent comfort of this electric SUV. The steering wheel is not left out with its Sensico trim, an artificial material that takes on the appearance and texture of leather. It is heated, like the front seats, which offer several levels that can be adjusted from the central screen. 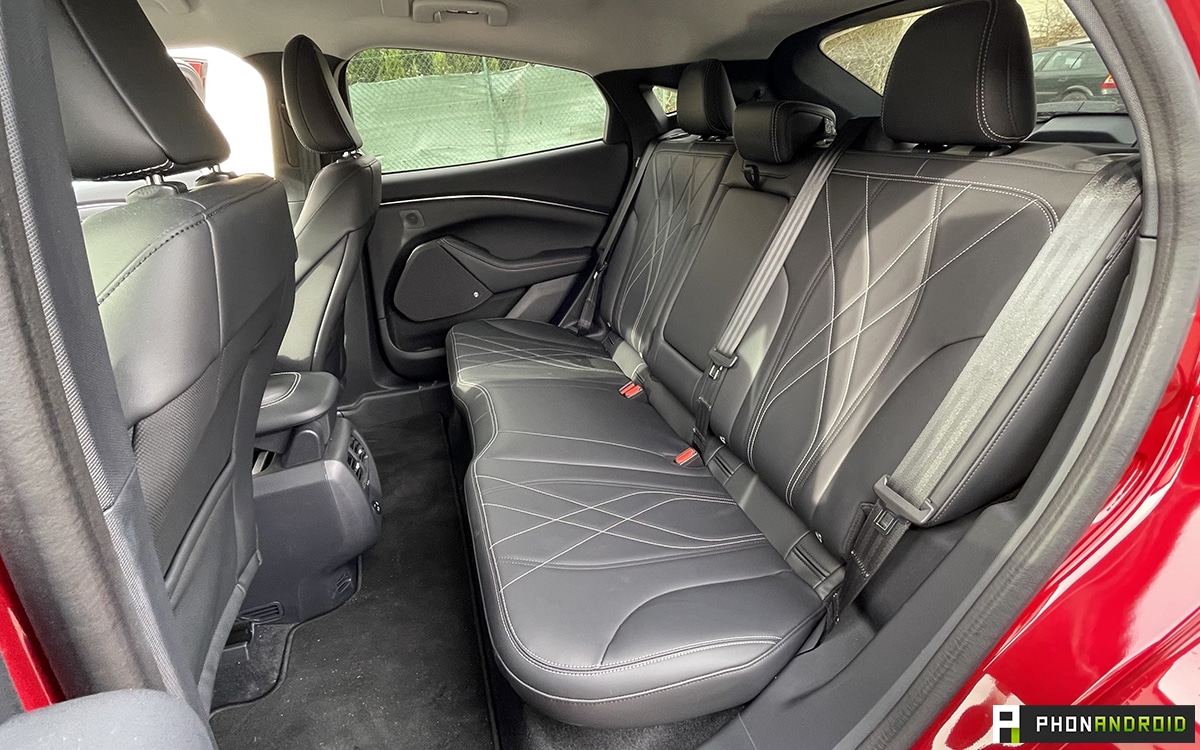 The space on board is generous and plenty of storage space is available, especially between the front seats in the absence of a gear selector. In addition to the storage compartment and the two cup holders, space is allocated to place two smartphones, but only one allows wireless charging. Note that with a recent iPhone (we had an iPhone 12 Pro and an iPhone 12 Pro Max with us), the system regularly displays an error message because the charge is interrupted. Indeed, the cumulative thickness of the silicone shell and the plastic support is probably too great. Two USB ports are nevertheless provided, including a USB Type C. This is the solution we recommend, because the wireless charging power is low at only 5W. 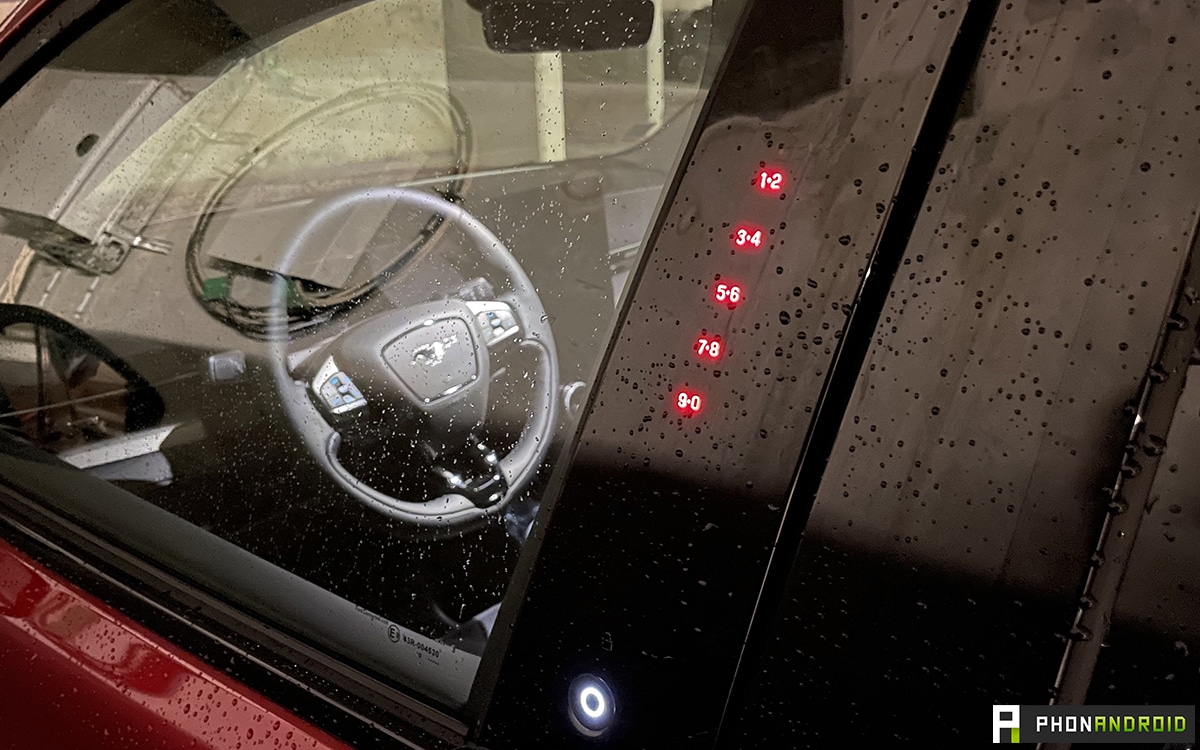 The rear seats are well accommodated with enough legroom, and good headroom despite the slightly cut profile. The absence of a transmission tunnel allows you to enjoy a real central rear seat, but the seat is a little less comfortable. 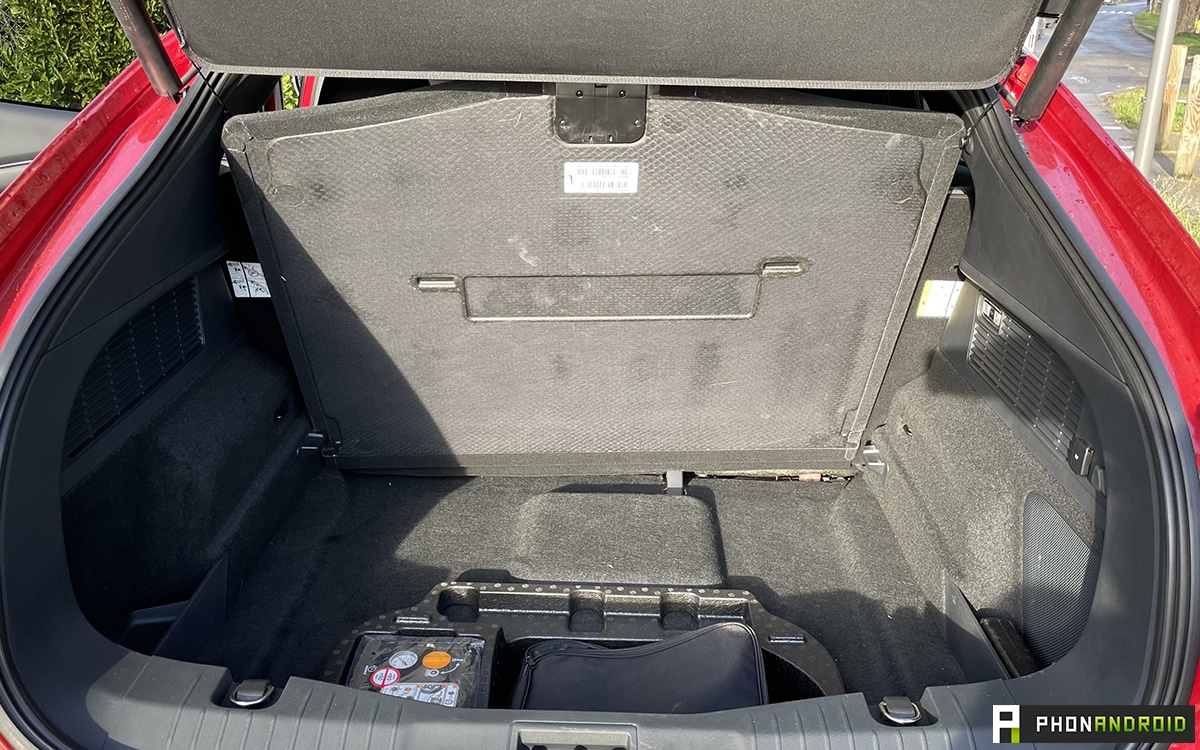 The Mustang Mach-E may impose it, it remains a Compact SUV, and this is felt at the level of the trunk. This one can accommodate some luggage, but it will be a bit tight for a large family. A double bottom is also present to store the cables and some accessories. Our trial version was equipped with the Technology Pack which includes the hands-free tailgate, so that the trunk can be opened with a movement of the foot. 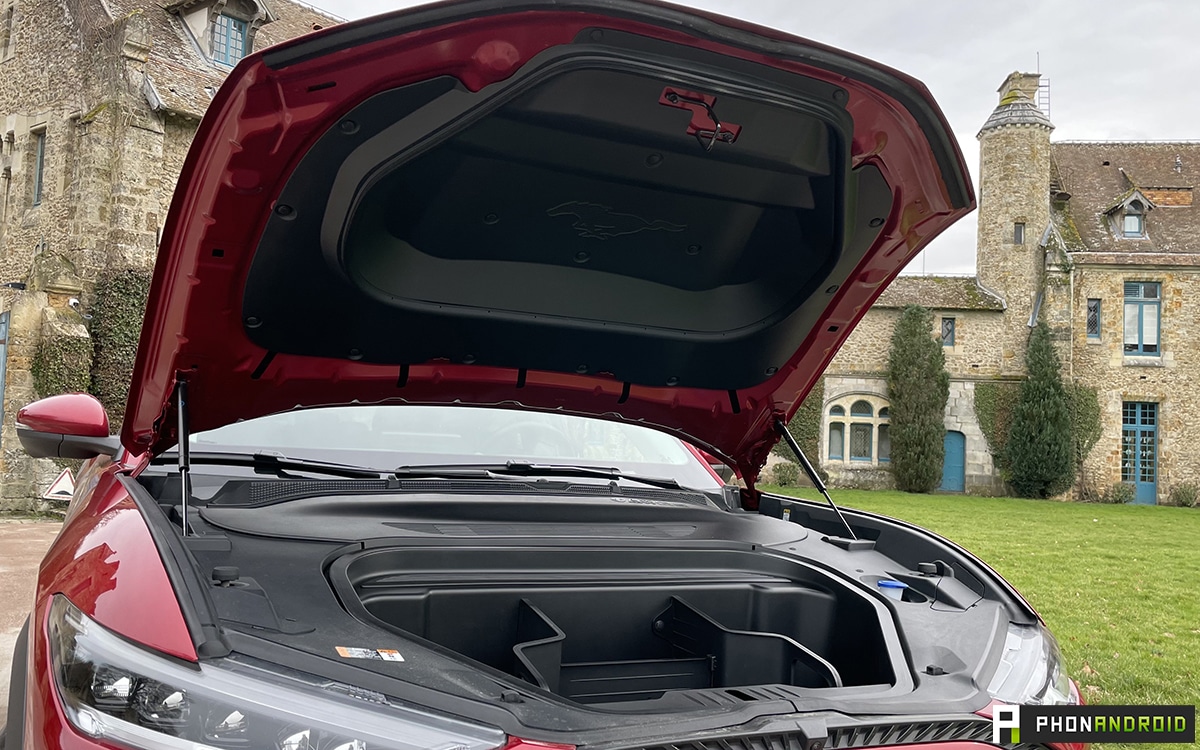 A second trunk is available under the front hood, which is wider than it is deep. Funny detail, this one has a water evacuation system (a hole drilled in the bottom), so that it can be washed or turned into… ice bucket, as Ford showed in a of its advertisements.

What range for the Ford Mustang Mach-E? 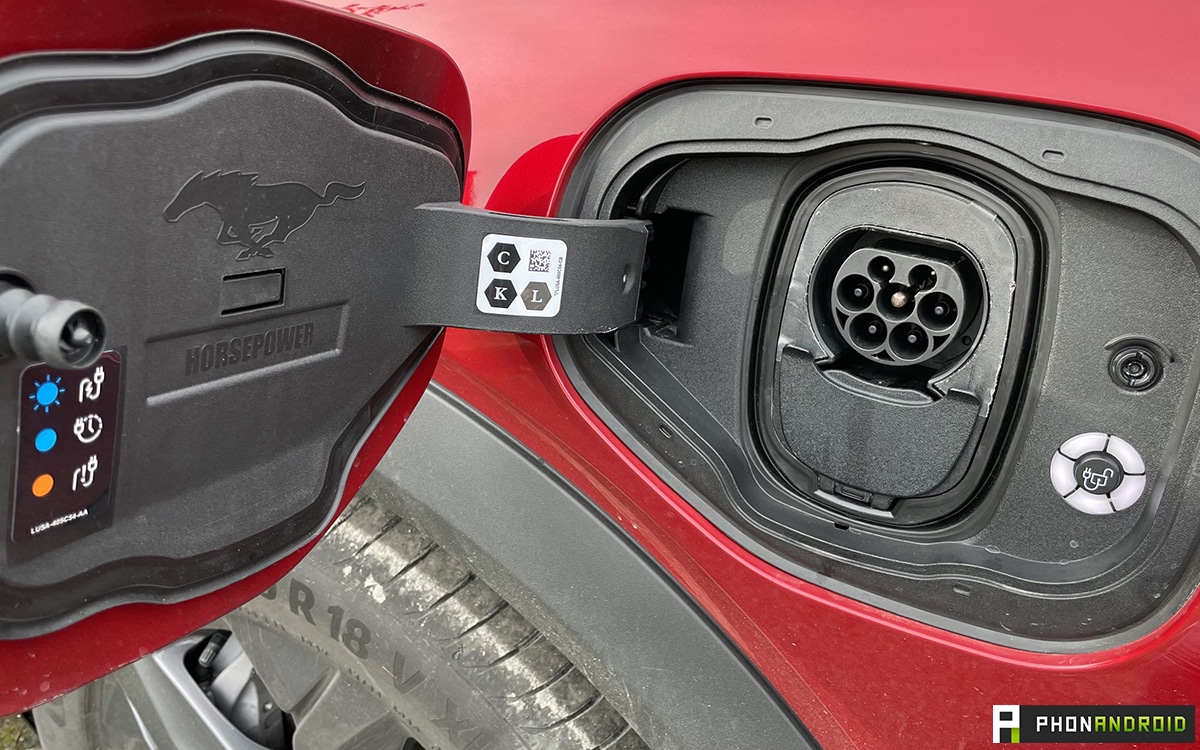 Note also that our test took place under extreme conditions for an electric car. Indeed, a cold wave hit France that same week, with temperatures down to -5 ° C. Not ideal therefore for battery life.

First observation: it is important to use the on-board mapping which references the terminals on the route. Of course, nothing also prevents you from preparing your trip in advance, and from using essential applications such as ABRP (A better Route Planner). However, the on-board system has the advantage of anticipating the break planned for recharging, and of preheating the battery so as to benefit from the optimum power. Practical, it not only indicates the charging stations along the way, but also the time needed to get there and the charging time recommended at each stopover to reach the destination. By clicking on one of the stations indicated, you can access more detailed information such as the type of connector and the power delivered. 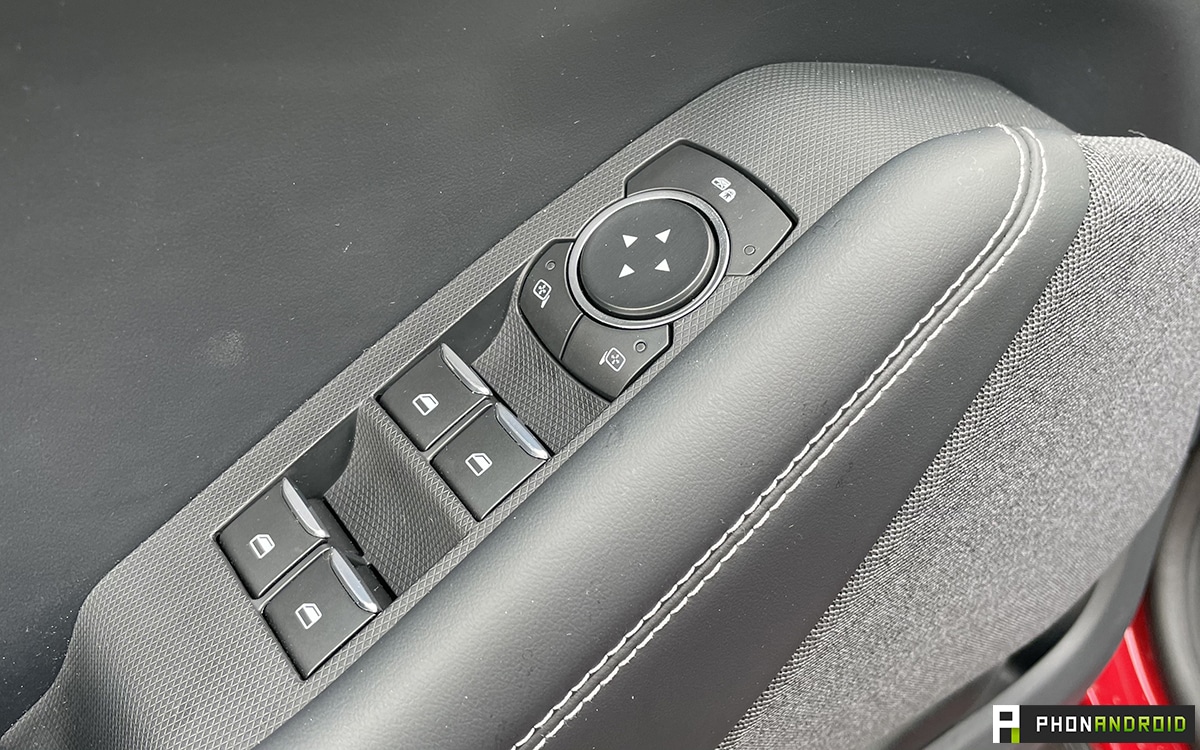 While driving at 130 km / h on the motorway between Paris and Nîmes, we noted consumption of 23 kWh / 100 km, heating on to keep the temperature on board at 21 ° C. And under these conditions, the Mustang Mach-E with the small battery would probably have been more worth it. Consumption is, on the other hand, much more contained on national roads and in built-up areas with around 13 kWh / 100 km.

Like other manufacturers, Ford offers several charging modes for the Mustang Mach-E, starting of course with conventional charging from a domestic outlet. Count for example 15h on a 3.7 kW mono socket, and 6 hours to recharge from 10 to 80% on a three-phase terminal of 11 kW. Fast charging reduces this time to 38/45 minutes with a power of 115 to 150 kW. 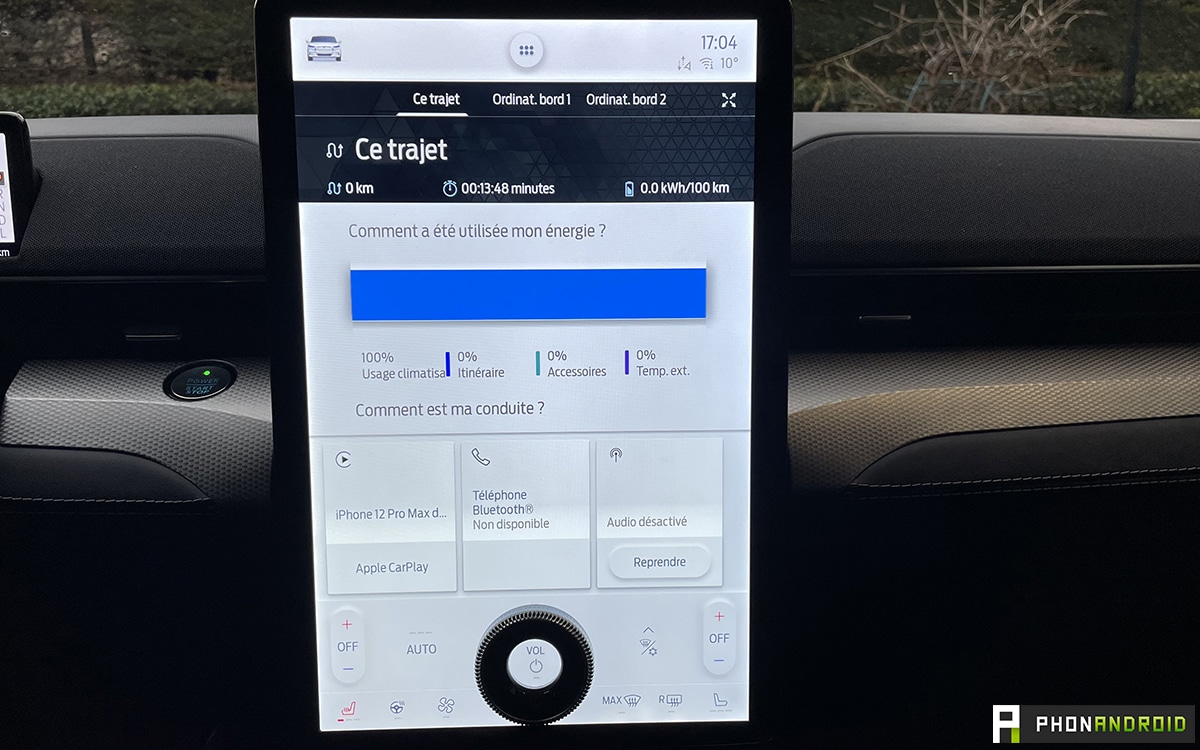 In practice, we have succeeded in reloading up to 150 kW on an Ionity terminal, but for only a few minutes. The power delivered quickly dropped, even dropping to 80 kW once the 60% capacity was reached. In any case, it is better to stop recharging the battery beyond 80% so as not to waste time. In the end, our Paris / Nîmes will only have taken about an hour more than in a thermal car.

On board, comfort is essential with, as we saw above, well-padded seats that provide excellent support over time. A comfort which is reinforced by a relatively flexible suspension, and an 18-inch Continental Premium Contact 6 mount.

Silence is also required and air noise is rather well filtered. A few minutes are enough to take the measurement of the dimensions of the car which can even be driven with only one pedal or almost. The regenerative system makes it possible to limit the use of the brake pedal, provided you anticipate. Lack all the same some information on the screen on this regeneration of energy. 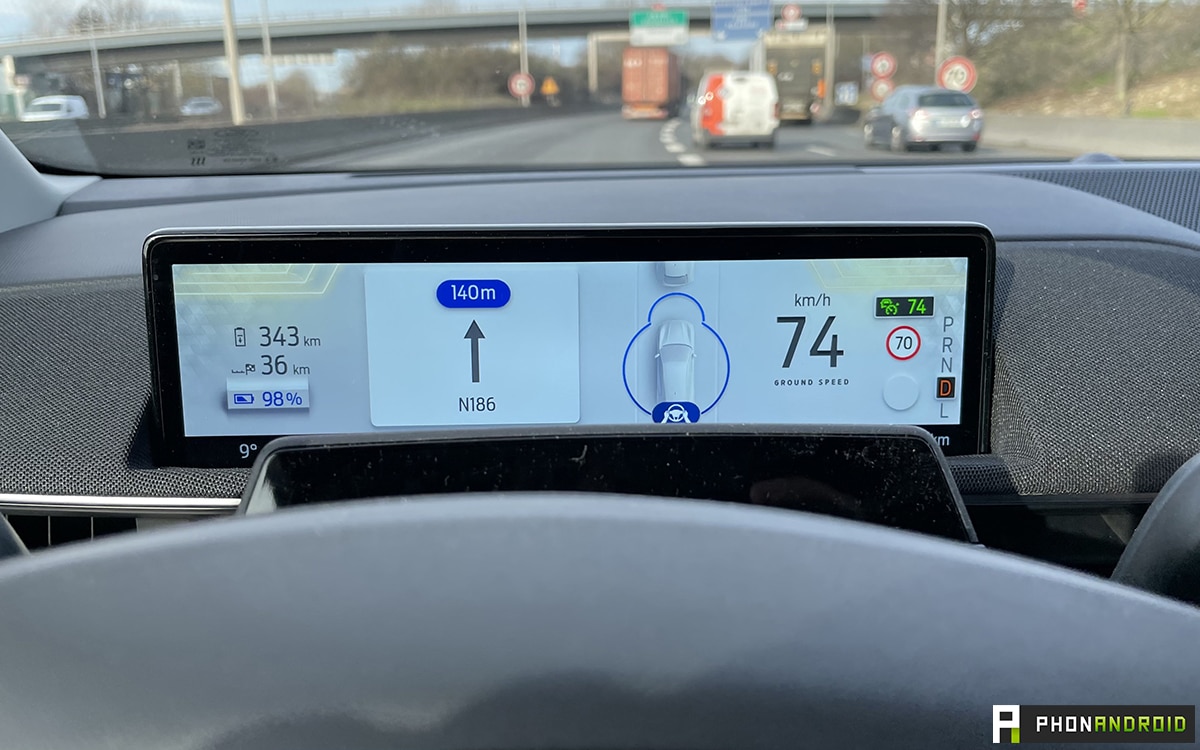 Three driving modes are available: Active, Whisper and Untamed. However, we would have liked them to display a really marked character, on the one hand in terms of the display on the dashboard which does not really change, and on the other hand in terms of sensations. Indeed, even by activating the Untamed mode supposed to deliver all the power of the engine, our Mustang seems very wise to us. Remember that this is the Extended Range of 294 hp, and that the 351 hp version will perhaps be less stingy in sensations. In the end, even by fully pressing the accelerator, the Mach-E does not stick us to our seat. This does not mean, however, that it is “dragging” itself, the times are there and overtaking is easy. It just lacks a surplus of character that we expected from this Untamed mode. 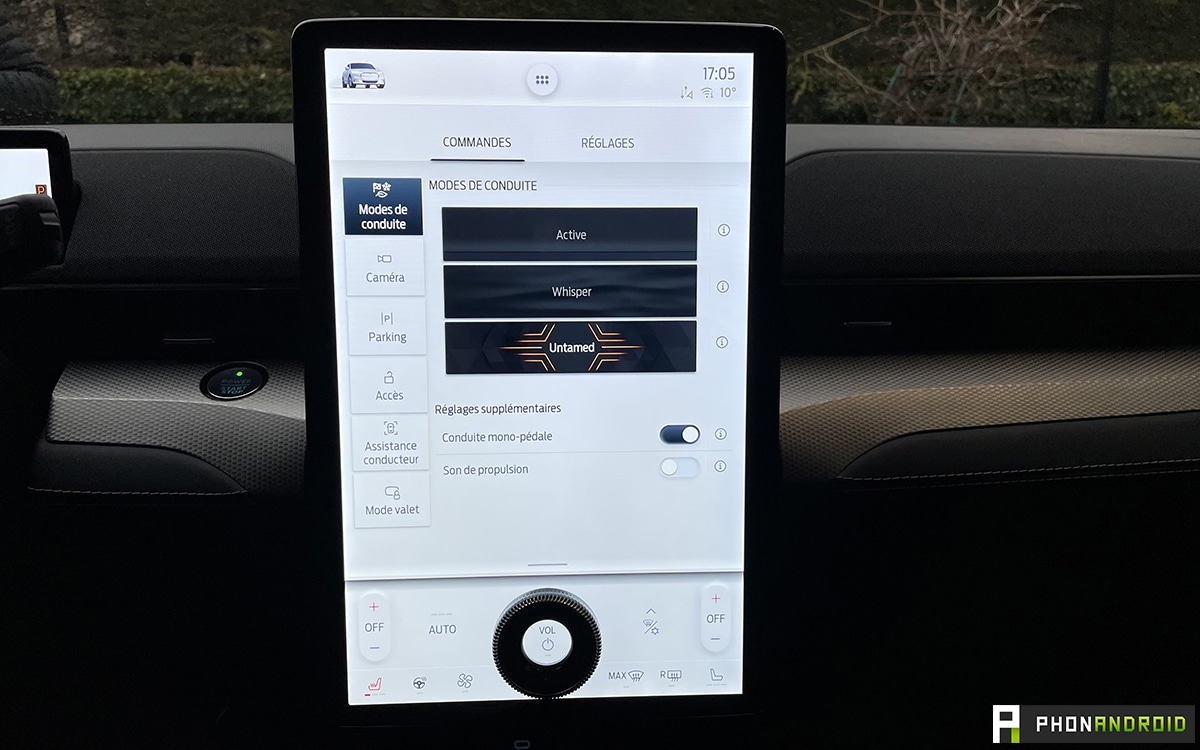 Semi-autonomous driving is classic with adaptive cruise control and lane keeping assistance. More impressive, the automatic parking function is really efficient. So it doesn’t matter if you suck at slots.

One of the big strengths of this electric car is the infotainment system. All information is gathered on 15-inch touchscreen in vertical position. This one displays an interface that is among the best of the moment, and which is divided into three parts. The lower section houses the comfort controls, notably with air conditioning, heated seats and steering wheel. In the center sits the volume control button (plastic, we remind you). 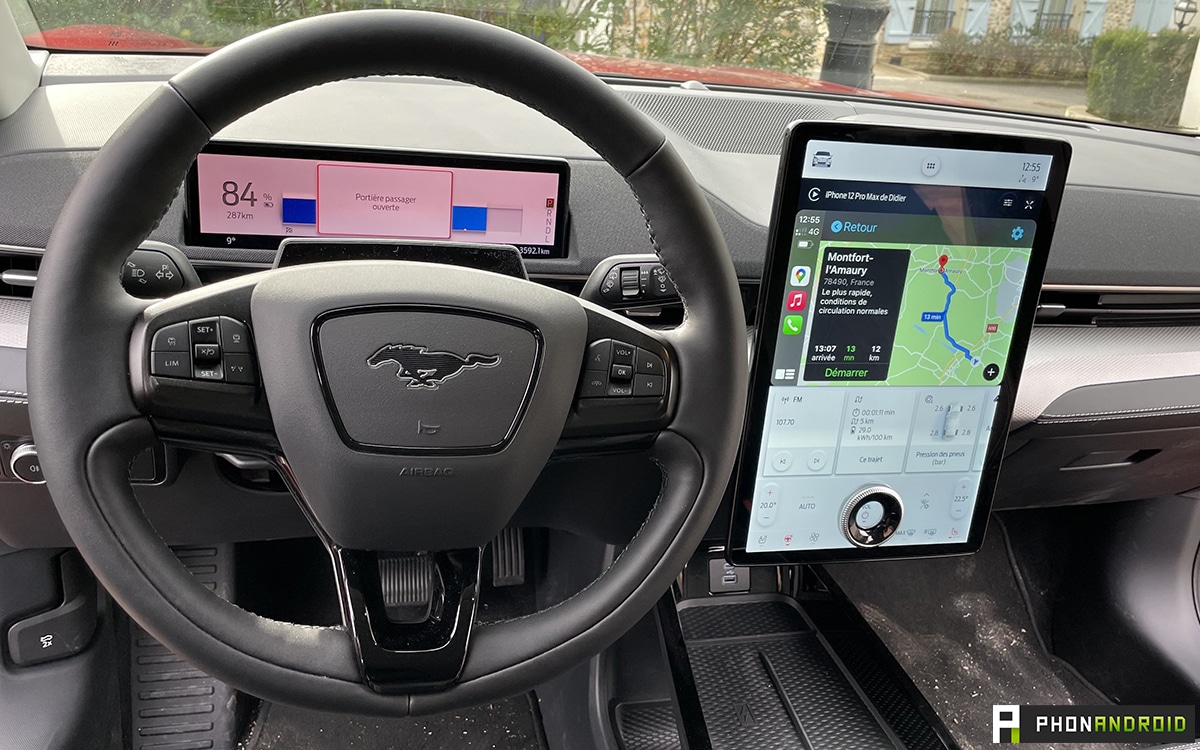 It is possible to access a more detailed screen for air conditioning by pressing the corresponding icon. This gives access to a very neat interface that represents the interior of the car, in order to control the air flow.

Come next widgets that offer direct access to certain features. These can be displayed large or small, and can be scrolled by swiping the screen from right to left. Note that the display of these widgets is dynamic: if you have used a function such as tire pressure via the menu, a corresponding widget will be added to the list.

Above is the main window. This is where the navigation will be displayed, Android Auto or CarPlay (wireless), among others. Finally, a shutter takes place at the top with access to the settings of the car. 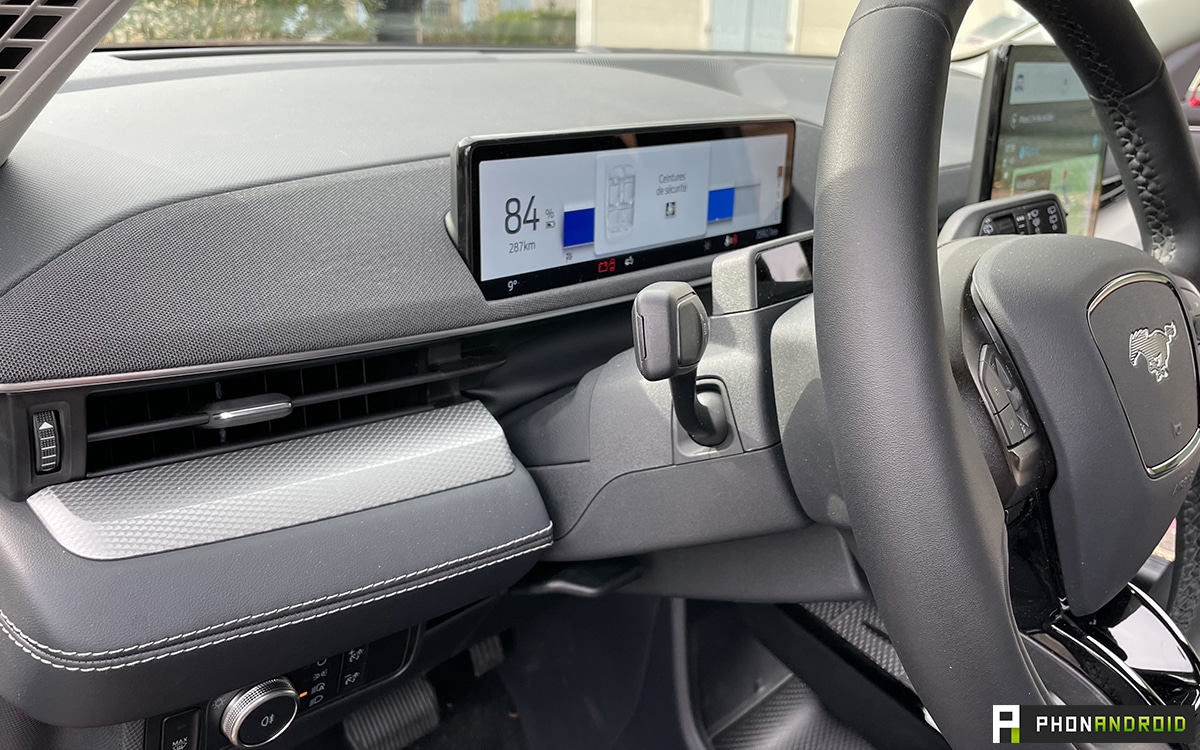 Finally, a second screen, horizontal this time, is integrated in front of the driver. Clearly readable, it displays in particular the electrical part on the left, a very clear navigation reminder, the vehicle speed, the speed limit and the gear engaged.

Read also: Ford will only sell electric cars in Europe by 2030

Of course, Ford offers a mobile application associated with the Mustang Mach-E. Very complete, it allows in particular to unlock the car, to program the recharging, to control the air conditioning remotely, or to manage the openings, with the exception of the front trunk. 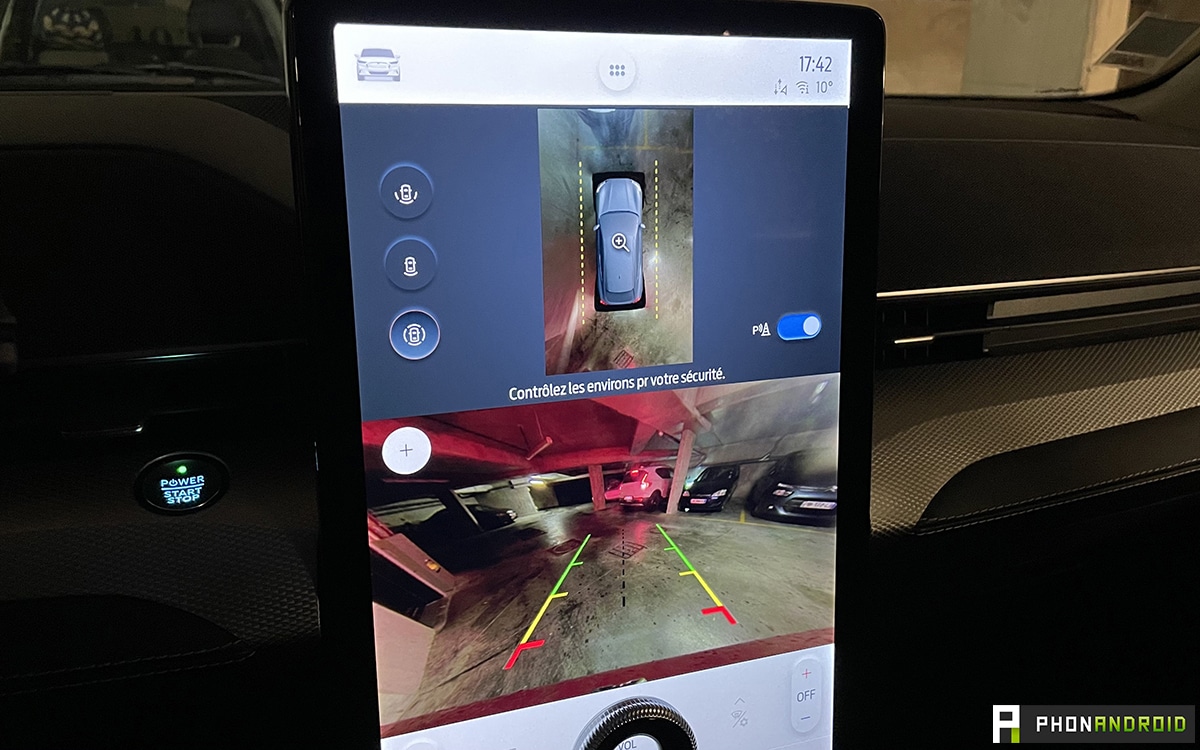 On the other hand, the application can still be improved, which is not surprising when it comes to the first versions of the Mach-E in France. For example, it must be refreshed manually to know exactly where the recharge is, for example. Indeed, the capacity displayed on the application does not correspond to that of the car, with a delay of a few minutes which can be annoying.

Also during recharging, it is only necessary to be satisfied with an indication of time remaining rather than of the power delivered. On the other hand, the route planner is extremely complete, proof that this application will have to improve even further.