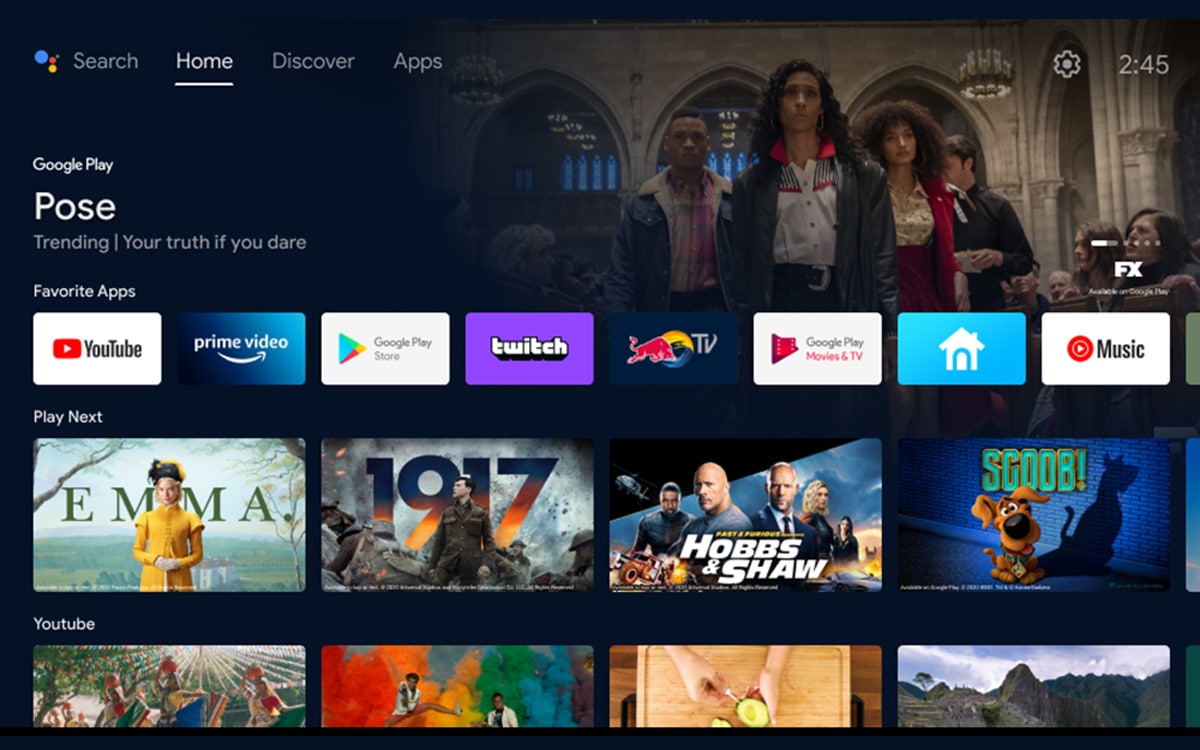 Android TV is entitled to a new interface largely inspired by Google TV, its successor. This new design includes several new features launched last year, such as a Discover tab with personalized recommendations. Google has just launched the deployment of the interface in France. You will be shown how to install the update on your Android TV device.

Remember: in September 2020, Google announced Google TV, the new interface dedicated to televisions intended to gradually replace Android TV. More fluid, clearer and more centralized, the Google TV interface concentrates all the content on a single page. Google mixes the movies and series available on Netflix, Disney + or even Amazon Prime Video to make it easier for users to find them. Google TV has entered the market with the brand’s latest Chromecast sold for € 69.99 since last September.

As announced, Google is looking to say goodbye to the “Android” brand. Since 2012, the word Android has gradually disappeared from the Google ecosystem. So, Android Market became the Play Store and Wear OS by Google replaced Android Wear. However, the Mountain View firm has not yet completely buried Android TV. This Wednesday, February 3, 2021, the search giant announced the deployment of a new interface on all televisions running Android TV.

On the same topic: Chromecast with Google TV – no compatibility with Stadia before 2021

What new features inspired by Google TV for Android TV?

This new interface borrows several elements from Google TV. We discover first of all a new tab-based navigation. At the top of the screen, you’ll see three new tabs: Home, Discover, and Apps. “The Home tab is similar to the one you already know”, says Google in a blog post. For its part, the Applications tab lists all the apps installed on the machine. Unsurprisingly, Google slips a link that relays to the Play Store.

The interface is distinguished above all by the integration of a new Discover tab. This section highlights the most searched movies and TV shows on the search engine as well as personalized recommendations based on your tastes and preferences. The tab displays indifferently content available in the Netflix catalog, in the Disney + catalog or on Amazon Prime Video. “The Discover tab brings together live movie, show and TV recommendations from all your apps” specifies the press release from Google. On Google TV, this tab is called “For you”.

However, the update does not allow you to take advantage of all the new features of the Google TV interface. Although the similarities are now more pronounced, they are indeed two different interfaces. Ultimately, Google TV should replace Android TV on all televisions always updated by their manufacturers. Thus, Sony has already announced that Google TV will be available on its TVs from the year 2021. Same story for TVs signed TCL. Most of Google’s partner brands will follow in Sony and TCL’s footsteps later. This is particularly the case with Philip.

How to install the new Android TV interface?

Google has just launched the deployment of this new interface in France, the United States, Australia, Canada and Germany. As always, the firm opts for a gradual deployment. Other countries will receive the update later. It will therefore be several weeks before the Android TV update has been pushed on all televisions. To check if the interface is already available on your device, just follow the maneuver below:

On some models, a notification will appear on the screen to let you know when a new update is available. What do you think of the new Android TV products inspired by Google TV? We await your opinion in the comments below.