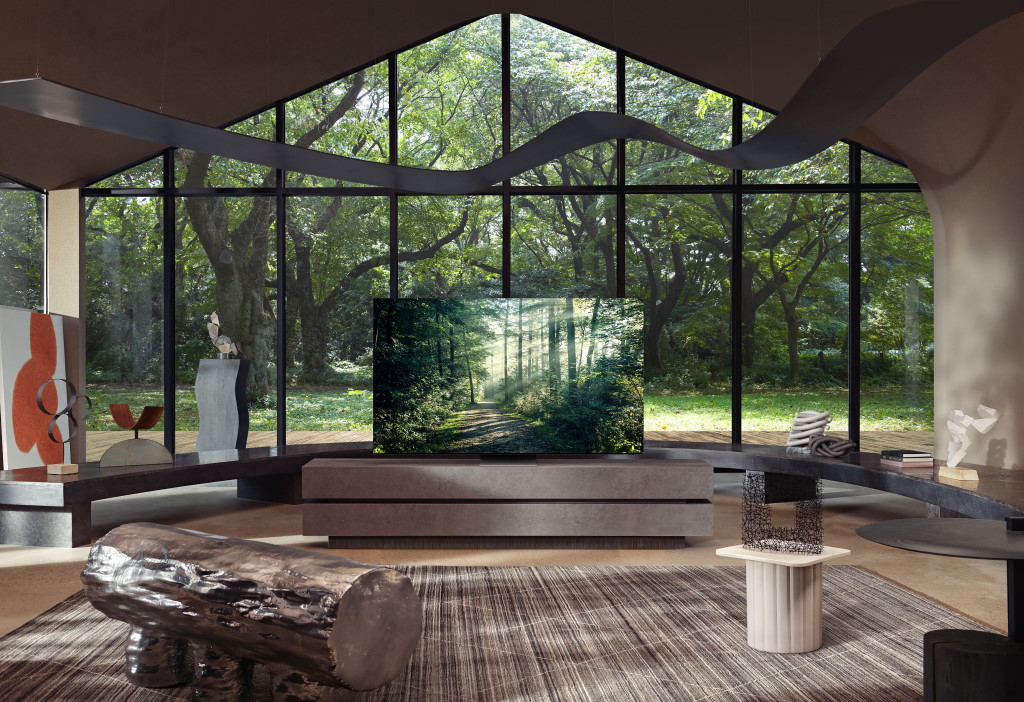 With its new range of Premium Neo QLED TVs, presented at the start of the year and now available in stores, Samsung is taking its Quantum Dot screens to a new level, for an exceptional audiovisual experience. New technologies, new functions, even improved design to immerse the viewer in their favorite programs … the new devices of the world number 1 in the TV industry mark a turning point at all levels, including in terms of sustainability. With an image that borders on perfection, enveloping sound and the discovery of new uses, the Neo QLEDs will literally change our perception of TV.

Recognized for their vibrant colors linked to the nanoparticles that make up their screens (the famous Quantum Dots which cover 100% of the colorimetric volume), Samsung televisions offer with the Neo QLED range an even more striking image of realism. To do this, Samsung is innovating in terms of backlighting by replacing conventional LEDs with ultra-thin layers made up of tens of thousands of “Quantum Mini LEDs”, 40x smaller.

In addition to reducing the volume of televisions, this innovative device delivers an image rich in detail, both very bright and characterized by a great depth of contrast. To contribute to this feat, Quantum Matrix technology provides extremely precise light management across hundreds of Mini LED zones. It is this ultra-fine control which makes it possible to reproduce with breathtaking realism all types of scenes, whether they are very dark or, on the contrary, very bright, while avoiding the pitfall of blooming (these halos that affect the general quality of the scene). ‘image) or that of light leaks. 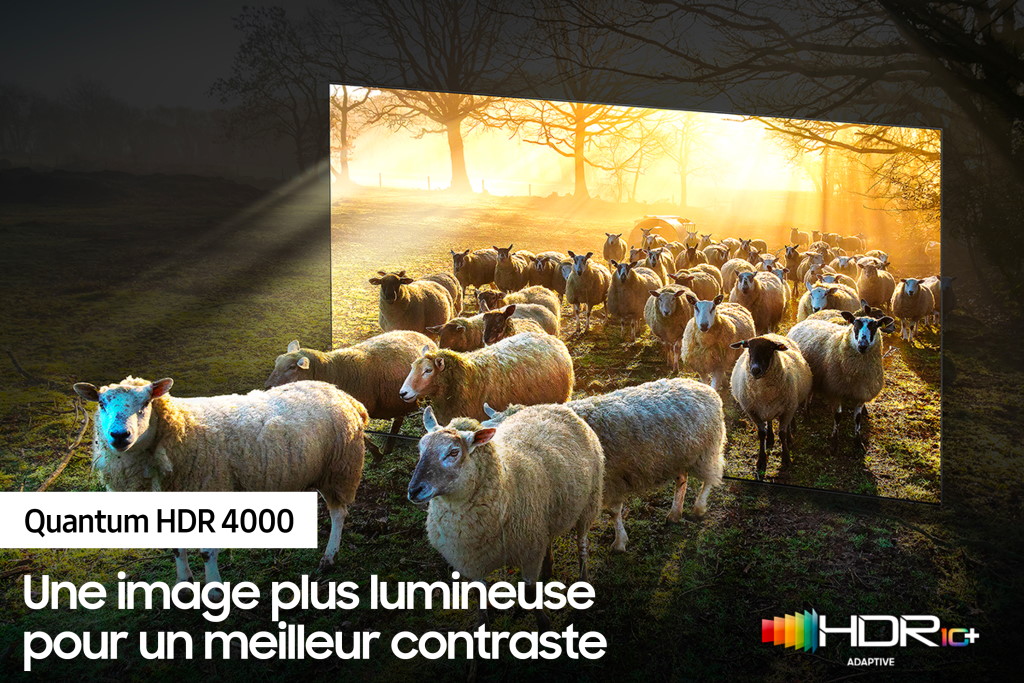 Neo Quantum processor: AI in reinforcement, for a display at the top

Beyond an extraordinary sharpness with perfectly reproduced details thanks to HDR 10+ technology, the images reach unprecedented peaks of brightness, especially with the flagship of the range, the 8K TV QN900A which can go up to 4000 nits. Perfectly suited to HDR content, the image offers unparalleled contrast, the new Neo Quantum Processor, latest generation and powered by artificial intelligence, taking care of ensuring 12-bit image processing for optimized rendering through billions of shades. This processor also reproduces a perfect image, whatever its original definition, thanks to its 16 neural networks which work for a successful upscaling. Overall, it guarantees the viewer a magical experience, improving both display and sound, for total immersion. These new features materialize for the user through the appearance and / or improvement of innovative functions such as Adaptive HDR10 +. This feature relies on a light sensor that analyzes the ambient lighting to provide the best possible image. In the audio sector, SpaceFit Sound technology, for its part, makes it possible to broadcast sound suited to the room in which the television is installed. 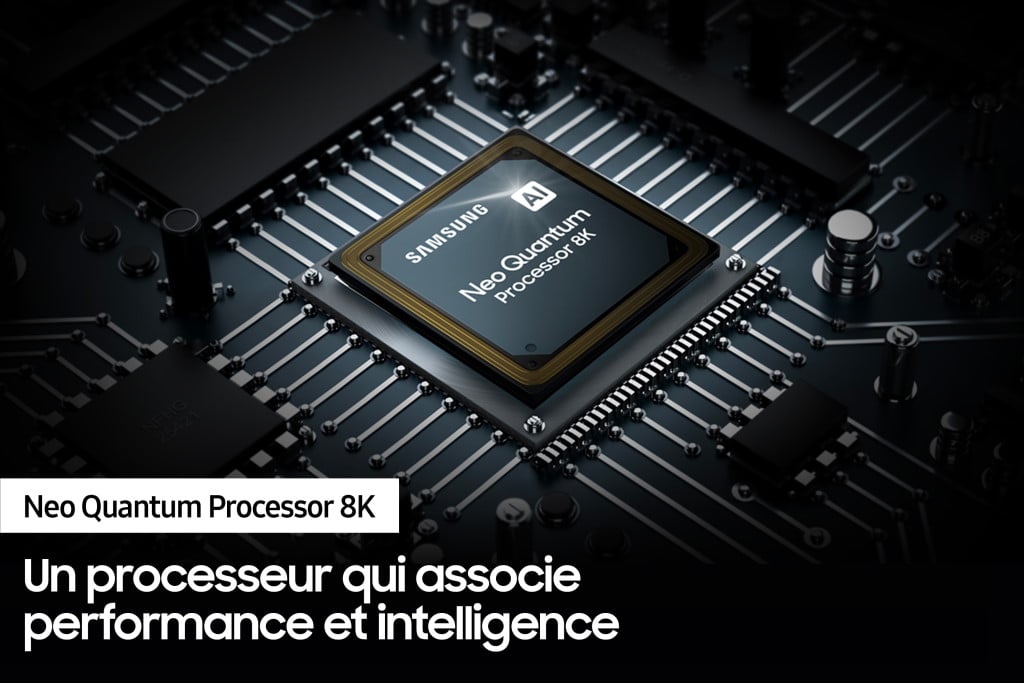 Ever larger screens of absolute refinement

To promote viewer immersion a little more, Samsung offers its Neo QLEDs in several formats, reaching 85-inch diagonals on the larger ones. These models will not be less perfectly integrated into their environment thanks to their remarkable design. Made up of an ultra-thin bezel (around 15mm on more upscale models), these televisions benefit from extremely reduced bezels that give pride of place to the image. With the “Infinity” display on the QN900A, for example, the image even takes up 99% of the total surface area, which is quite a feat. Placed on a piece of furniture or suspended from the wall (thanks to an optional hanging system), the Neo QLEDs literally blend into the decor. The “One Connect” remote box that equips most of them is responsible for hiding the cables. The 8K models QN900A and QN800A even benefit from a so-called “removable” version, with a new ultra-thin box that includes all the connections and can be recessed into the back of the TV.

Buying a television is by no means a trivial act. On the one hand, it is a pleasure shared by the whole family, but also an investment that we want to see last over time. Samsung offers its customers real guarantees of sustainability. With the Quantum Dots technology constantly improved by Samsung, inorganic particles thus ensure an extended lifespan of the new Neo QLEDs. Thanks to this, the manufacturer can offer its customers a 10-year anti-marking warranty, which few competitors would risk. It also commits to a 7-year availability of spare parts.

But Samsung goes even further when it comes to eco-responsibility. Each TV comes in packaging made from recyclable cardboard and therefore reusable. In addition, this eco-packaging, thanks to its system of printed markers, will find a second life in the user’s home. The latter can indeed cut it easily to transform it into a toy (rocking horse, etc.) or a utility object (coffee table, etc.). Finally, the Neo QLEDs come with a remote control partially made from recycled materials and which is recharged using the light in your living room, but also via USB. Enough to save millions of batteries.

From image to sound, everything for an anthology show

As the Euro and the Olympics approach, Samsung intends to offer much more to everyone than a television, in the classic sense of the word. The manufacturer thus plans to transform a simple gathering of family or friends, around a game for example, into an unforgettable spectacle. On the image side, an anti-glare filter will allow everyone to fully enjoy each image without the lighting or the sun’s rays disturbing the quality of the display. From the 4K series of the QN95A, the Neo QLEDs also benefit from wider viewing angles, very practical so that everyone benefits from the same level of quality.

And because a beautiful picture is only worthwhile if the accompanying sound is up to par, Samsung has taken care of the audio quality of its televisions. Beyond the optimal sound reproduction provided by SpaceFit Sound, mentioned above, the manufacturer has equipped its Neo QLEDs with multiple speakers all around their panel to immerse the viewer in the heart of the action. There are 10 of them for a total power of 80W on the QN900A. Better still, the intelligent OTS + (Object Tracking Sound +) system makes it possible to follow the movement of subjects on the screen, with sound that passes from one speaker to another, for better dynamics and stunning spatial rendering. The opportunity to enjoy a sports broadcast together, with an identical level of comfort for all, and the impression for everyone of being in the stands. 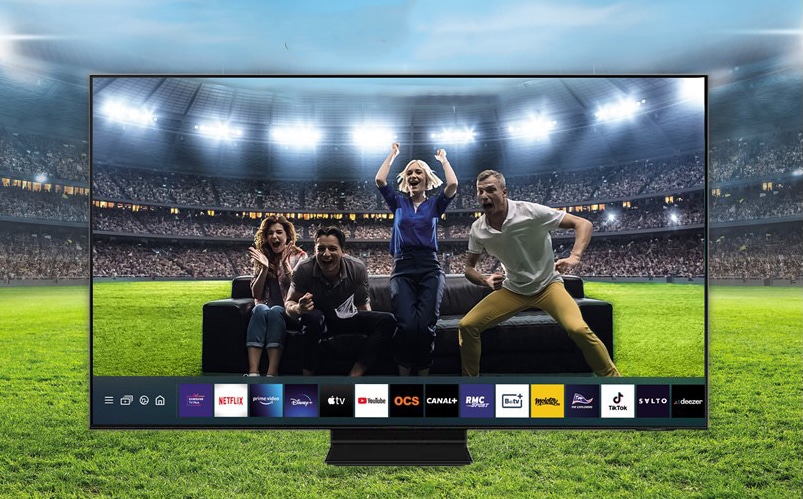 With televisions as fabulous as the new Neo QLEDs, it would have been a shame to limit the uses to simply watching TV channels. New tools have therefore been integrated to meet the aspirations of players in particular.

In the Tizen OS of these Smart TVs, we notice for example a new Game Bar which offers the user the possibility to access real-time information and to adjust certain advanced parameters in a few moments such as the control of the computer. ‘Input lag, connection of a peripheral or the choice of a format (21: 9 or 32: 9 for an ultra-wide display). From a technical point of view, gamers will also appreciate the screen refresh rate of the Neo QLEDs intended to make images more fluid, and the FreeSync Premium Pro compatibility which prevents tearing phenomena. The connection is, for its part, the latest generation (HDMI 2.1) to manage the latest consoles on the market.

Evolving with new lifestyles, the Neo QLEDs enhance your video sessions with friends. To enjoy video calls on the big screen, all you need to do is connect your smartphone to the TV. Via Google Duo, up to 5 people can then be displayed and converse with you while the Multi View mode even allows you to keep an eye on a TV channel. Even telecommuting is in the spotlight, as you can turn your smartphone into a real PC thanks to the wireless Dex service and take advantage of the giant TV screen for viewing. 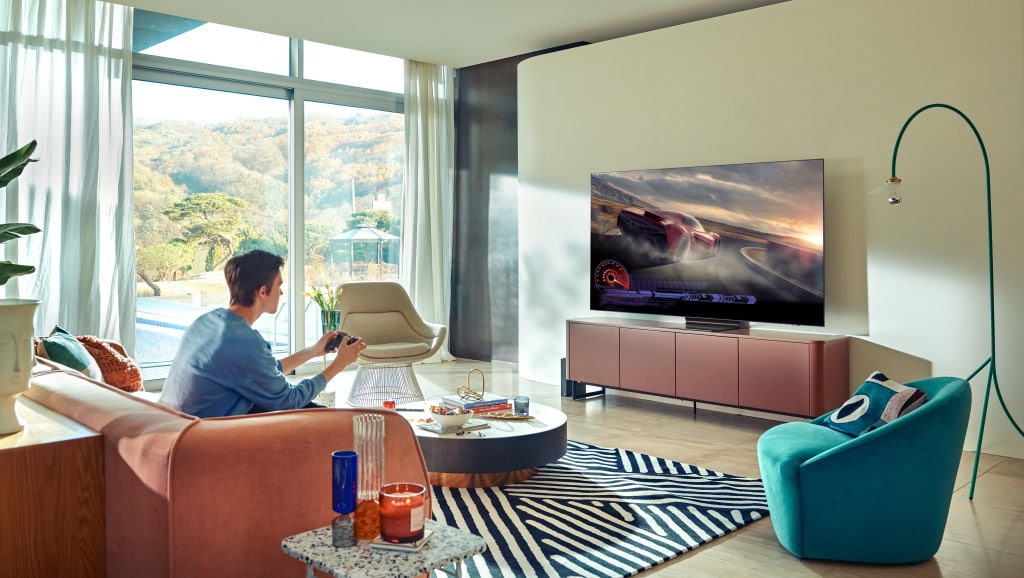 Access to a multitude of content becomes possible in a few moments. The catalog, accessible from the Samsung Neo QLED interface, seems endless. The major VOD platforms (from Netflix to Disney + to Prime Video) are all present, as is a wide choice of services and apps, including the latest version of the Canal + app. The brand also provides owners of a Neo QLED Samsung TV Plus with a bunch of free channels and thousands of hours of 4K content.

Of course, the many strengths of the new Neo QLED televisions will undoubtedly tip the scales in their favor at a time of choice, whatever your expectations!

This sponsored post is brought to you by Samsung.