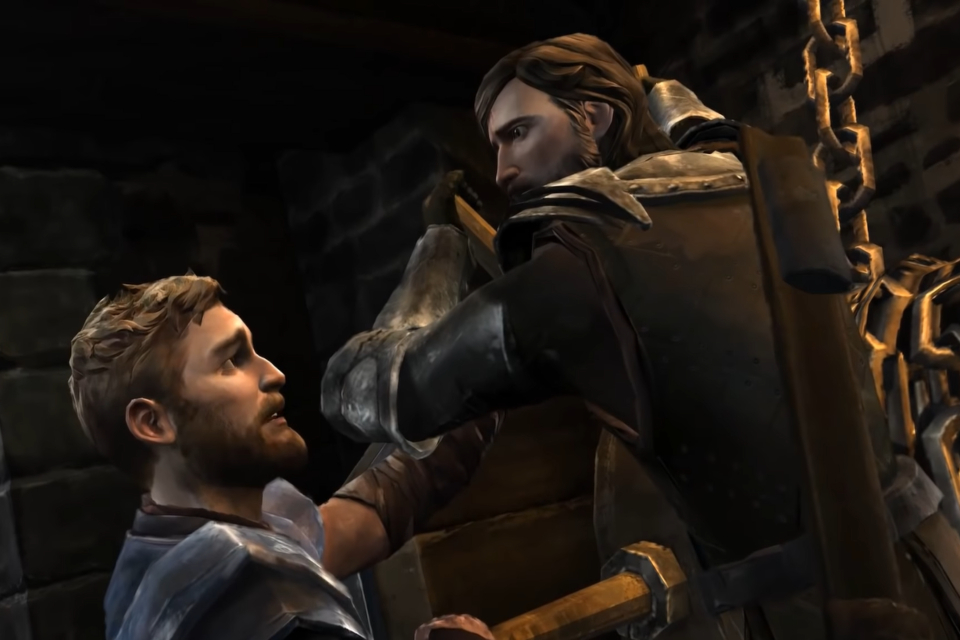 Just like in real life, video games constantly put us at a crossroads, giving us the responsibility not only to control outstanding characters, but also to decide their destinies and those of everyone else around them.

Some of these moments are full of drama and complex circumstances, while others are softer and have less drastic consequences, but all of them affect, in some way, the development of the narratives, either visually or in game mechanics.

Now check out some of the most difficult choices players have to face in games. It is also worth remembering that the vast majority have spoilers, so be aware of the content presented below.

Telltale Classic, game of Thrones expanded the universe of George R.R.Martin with an interesting narrative filled with very difficult choices. In one of them, when brothers Rodrik and Asher from the Forrester house finally meet, the players find themselves facing a tense decision where they must select which one to sacrifice to save their soldiers.

The scene is intense, as each take of the moment was beautifully placed. The slow motion, the fantastic soundtrack, the drama on the heroes’ faces … Everything helps the player to get completely trapped and enter a state of despair for being forced to kill one of the incredible characters.

Life is Strange it has become a cult classic of the past decade by tackling rather delicate themes in a plot geared towards supernatural drama. In the game, Chloe and Max create a bond of complicity and fantastic love, leading the audience to immerse themselves in their relationship and to have to make many difficult decisions, each with drastic consequences for the story.

In the end, with the emergence of a huge hurricane that is about to destroy Arcadia Bay, it is necessary to decide between saving the city or saving Chloe, since Max’s constant time travel has caused more problems than solutions. A difficult moral choice that certainly enshrines an exciting endgame.

As an open-world RPG based on choice and karma, Fallout 3 suggests a series of choices that determine the path not only of Lone Wanderer, but of entire cities, as in the case of Megaton in the mission The Power of the Aton.

With devastating power in hand, the player can choose between blowing up an atomic bomb in Megaton, eradicating the plague within a radius of kilometers, or defusing the bomb and saving some souls that inhabit the city. At this moment, important skills are needed to see all the endings, so if you already have all the requirements, feel free to sweat a little in the face of such a choice.

If you have ever complained that life provides you with many difficult choices, it is because you have never checked the life of Geralt of Rivia. In The Witcher 3: Wild Hunt, the White Wolf finds himself in hundreds of complicated decisions that determine not only his future, but the relationship with each of the characters within the game.

And in several of these moments, it is necessary to agree some specific dialogues and actions to develop more intimate relationships with Yennefer and Triss, the main affections (and disaffected) of the wizard throughout the game. Until, at a certain moment, the hero will have to choose between one of the witches or even both at the same time. And good … Remember that choosing to be a little more ambitious will result in a memorable scene.

The classic RPGs of Pokémon from Game Boy times, players were already asked to make a very difficult choice at the beginning of the game: which will be the first Pokémon on the team. It must be agreed that deciding between Charmander, Squirtle and Bulbasaur was a moment in the life of many children and young people who shaped their characters. And we all know that whoever chose Charmander became a better person (kidding, guys).

Jason and his friends decide to spend a few days of fun on a deserted island paradise, until they are attacked by pirates and everything starts to get worse and worse. The protagonist of Far Cry 3, in the condition of an ordinary person, then sets out on a survival journey to rescue his kidnapped friends, while creating bonds with natives to improve his skills.

At the end of the game, Jason must choose between killing his friends and staying with the native Citra or escaping the scene with his girlfriend and friends. In this way, a whole context of violence, ties and destiny is explored, in order to significantly hinder a decision that, if it were made earlier in the game, would be easy.

Despite being a linear game, resident Evil 7 it has a key moment in which we must choose for the life and death of two loved ones. One of them is Ethan’s wife, Mia, who ended up at the Bakers’ house and became infected, with occasional outbreaks of violence and personality; the other is Zoe, the mysterious voice that led the protagonist through the threatening location, saving the boy’s skin countless times and being responsible for producing the serum.

The player is entirely responsible, as are the consequences.

The Walking Dead, by Telltale, is a game full of difficult choices and most of them determine the fate of Lee, who suffers the entire game to escape from hordes of zombies.

After being bitten by a brain eater, everything seems to be lost for the protagonist, until at the end of chapter four a saw is found in the hospital morgue. It remains for the player, then, to decide whether to cut off Lee’s infected arm or leave it on the body and accept whatever comes, and although the decision is a bit obvious especially for fans of the survival genre, the context guarantees an “emotional blackmail” “that doesn’t make things any easier.

Yes, the franchise GTA it also had its moments of difficult decisions that have repercussions in history, more specifically in the fourth game of the saga. In the search for the man who betrayed his military unit 15 years ago, Niko Bellic finds himself in real social chaos, while trying to live the famous American Dream.

As the story unfolds, the protagonist finally finds his nemesis, Dimitri Rascalov, and has the option of ending his revenge. Upon killing him, Niko’s girlfriend becomes a victim of the mafia during her cousin’s wedding; when saving him, Niko’s own cousin becomes the victim in his marriage. A difficult decision with long-term consequences.