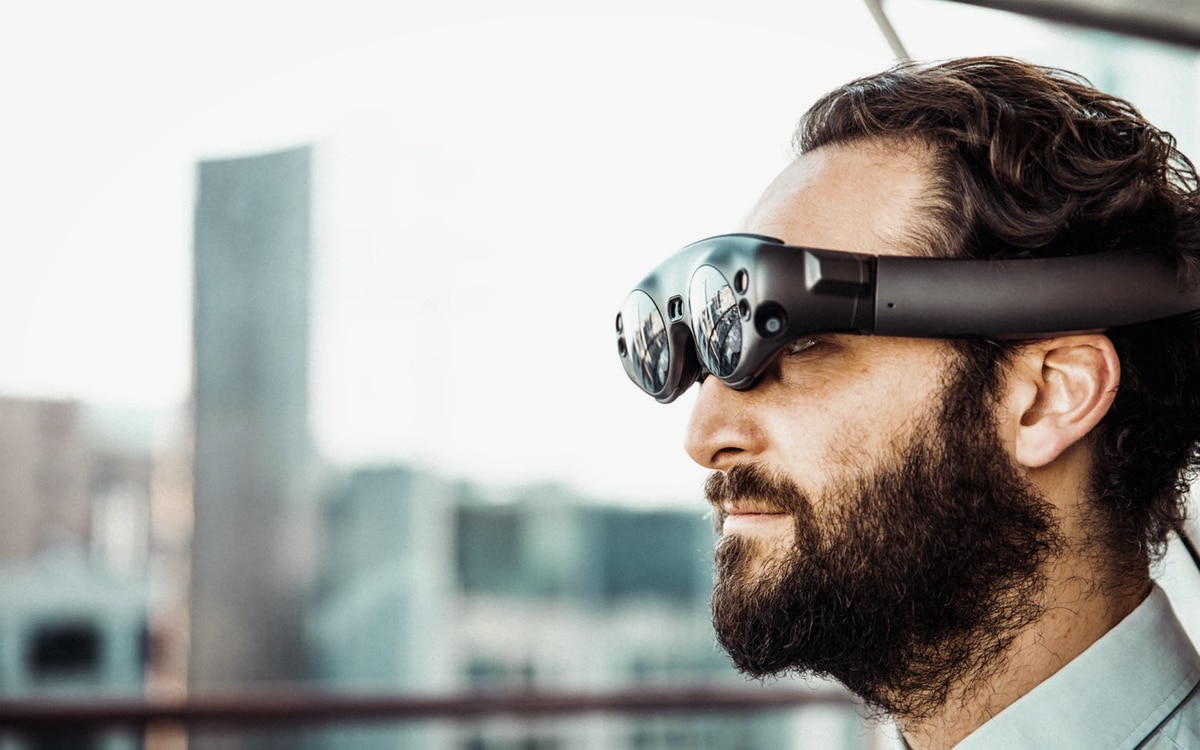 New details are emerging around Apple Glass, the augmented / virtual reality headset that Apple plans to launch. Journalists would have had access to information and images of a recent prototype. They give many details about the design and characteristics of the current model.

The Information site has just published an article on Apple Glass. We discover the most detailed design and technical robot portrait of the device to date. The site also shares a sketch “Based on internal Apple images of an advanced prototype from last year”. What to give a fairly faithful idea of ​​the formula adopted at this stage by Apple for this product.

The first info concerns the design. Apple reportedly mixes several elements of its latest products, such as HomePod, Apple Watch, or AirPods Pro Max. The device would be covered with a woven “mesh” material like the HomePod, and would have a digital crown, like the AirPods Pro Max and the Apple Watch. The strap would be made from premium materials and would be interchangeable much like Apple Watch straps.

Apple Glass: it would mainly be an augmented reality headset

Here is what gives the design of the device according to the sketch shared by The Information:

Straight away, if we stop at the cosmetic aspect, the device does not seem to have much revolutionary. Many virtual reality headsets like the Oculus Go indeed resemble this design. The main difference with the latter is, however, that it can enter into augmented reality mode – although The Information points out that this experience will be relatively limited.

We have, by the way, some info on the Apple Glass technical sheet. According to The Information, the device will be clad in sensors. There will in fact be a dozen video sensors to follow the user’s movements, but also, we imagine, reproduce images of your environment on the screens of the helmet. The set would be accompanied by LiDAR sensors, the same as we saw Apple implement on the iPad Pro and iPhone 12 Pro / Pro Max.

These sensors would be used in particular to map the room you are in, and to embed more precise augmented experiences. Finally, and this is undoubtedly the most essential point of their technical sheet, Apple would have opted for an 8K 120 Hz screen for each eye. Which would be completely new: the Oculus Quest 2, for example, currently offers one of the best definitions on the market with a definition of 1832 x 1920 pixels per eye at 90 Hz. The PSVR goes up to 120 Hz, but does not proposes that a definition of 1080 x 960 per eye.

Apple Glass 8K screens could change everything, but it will have to pay the price

Of course the definition by eye is directly linked to the realism of the experience. Currently the pixels are clearly visible regardless of the helmet, but if the 8K per eye is confirmed, Apple Glass will offer unrivaled realism. The only problem is that this type of screen will necessarily be very energy intensive. But Apple would have a trick: rather than rendering everything in 8K, only the part of the image that you view directly with your fovea will be in 8K.

The fovea being that little part of your retina that makes you feel like your eyes have incredible definition (while this is by no means true for your peripheral vision). A technology called foveated rendering. This involves, among other things, sensors that monitor the movement of your eyes in real time. So many complexities that go force Apple to integrate a particularly powerful chip. Apple Silicon is reportedly in the process of finalizing it. According to The Information, it is no longer so certain that Apple is satisfied with the M1 chip of the latest macs – whose performance could prove to be insufficient.

On the control interface side, nothing would be quite stopped yet. Apple is reportedly experimenting with many control modes, including tracking your gestures and eye movements. More traditional controllers would nevertheless also be tested. A priori this helmet will not be as Apple’s first attempt in the segment. The ultimate goal would remain to deliver a product close to prescription glasses in terms of size, weight and bulk – even if this is simply not yet technologically possible at this stage.

The Information ventures to give a price for Apple Glass: 3000 dollars – which would be if this is confirmed three times more expensive than the best current virtual reality headsets.