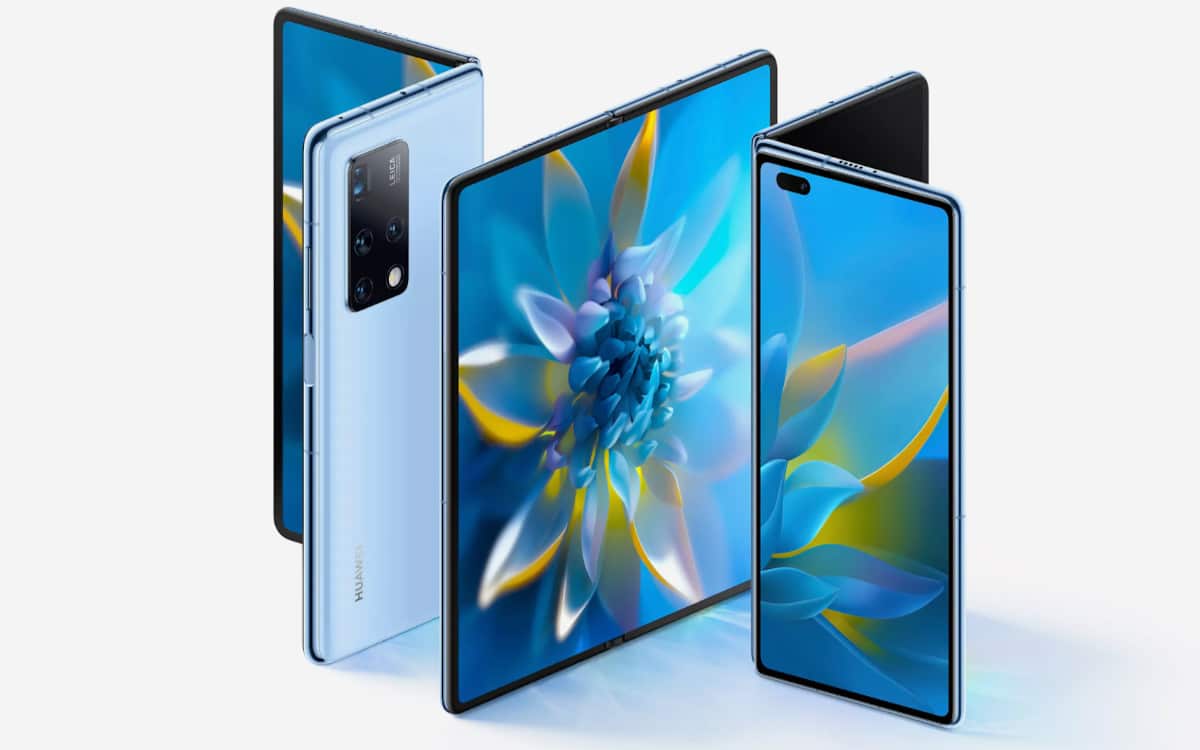 As expected, Huawei has formalized the Mate X2, its third smartphone with a foldable screen. A true competitor of the Galaxy Z Fold 2, it notably takes up its design with a flexible screen that folds inward and an external secondary screen. Boasting much of the Mate 40 Pro + spec sheet, it will be sold in China starting at around € 2,300.

The appointment was made: today, Huawei organized an event in China to present the Mate X2, its third hybrid smartphone with flexible screen. Rumors have largely spread all the surprises that the brand wanted to keep secret. We only had to discover some technical details, especially in terms of photography and autonomy. We also wanted to know at what price the Mate X2 would be offered. We have had all of these questions answered.

Let’s start with the design. As expected, the Mate X2 does not take the design of the Mate X and the Mate XS, but that of the Galaxy Z Fold and Galaxy Z Fold 2. Understand that the smartphone is equipped with two screens: a large, flexible, which folds inwards, and a smaller, rigid one positioned on the outside for all uses closer to those of traditional smartphones. He 14.7 mm thick when folded and 8.2 mm when it is unfolded. He weighs 295 grams. It is therefore thicker, but less heavy than the Mate XS. The shell is in mineral glass and the edges in aluminum.

Two screens, one 8-inch flexible and one 6.45-inch rigid

The large screen measures 8 inch, the same size as the screen of the Mate XS. It displays the same definition and therefore the same resolution (413 pixels per inch). It is OLED of course. And the refresh rate is 90Hz. The secondary display, OLED and 90Hz as well, measures 6.45 inch. This is a very slightly smaller area than the screen of the Mate XS when it is folded up. The display definition is slightly higher than Full HD +, for a resolution of 456 pixels per inch. 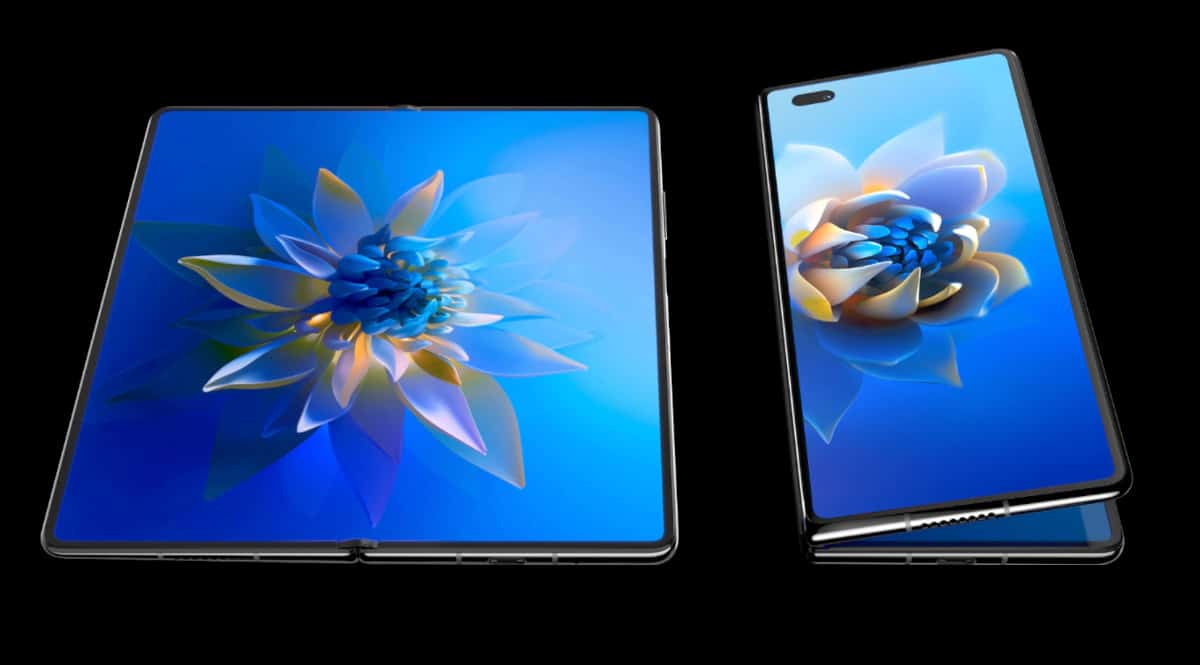 Inside, you’ll find the Kirin 9000, the high-end crossover SoC in the Mate 40s. This octo-core 5nm SoC is clocked up to 3.13 GHz. It integrates an ARM Mali-G78 MP24 GPU and a 5G compatible modem. The SoC is accompanied by 8 GB of RAM. Its storage quantity is 256 GB or 512 GB. We will come back to the prices later. Its operating system is EMUI 11, based on Android 10. There is obviously no Google service.

The built-in battery is a model 4500 mAh, without change vis-à-vis the Mate XS. The Galaxy Z Fold 2 also benefits from a 4,500 mAh battery: no jealousy! The Mate X2 is fast charging compatible. The maximum power accepted is 55 watts, like the Mate XS. We would have preferred a slightly beefier battery and the Mate 40 Pro +’s fast charging. There is also no wireless charging. But it’s not that important.

On the connectivity side, we find the same elements as the Mate 40 Pro +: WiFi 6, Bluetooth 5.2, NFC, USB type-C, no 3.5 mm jack, two stereo speakers and a remote fingerprint reader on the edge, as for the Mate XS. Fingerprint readers under flexible screens do not exist yet (it seems Samsung will include one in its Z Fold 3). However, Huawei could have integrated it under the secondary display. Never mind. 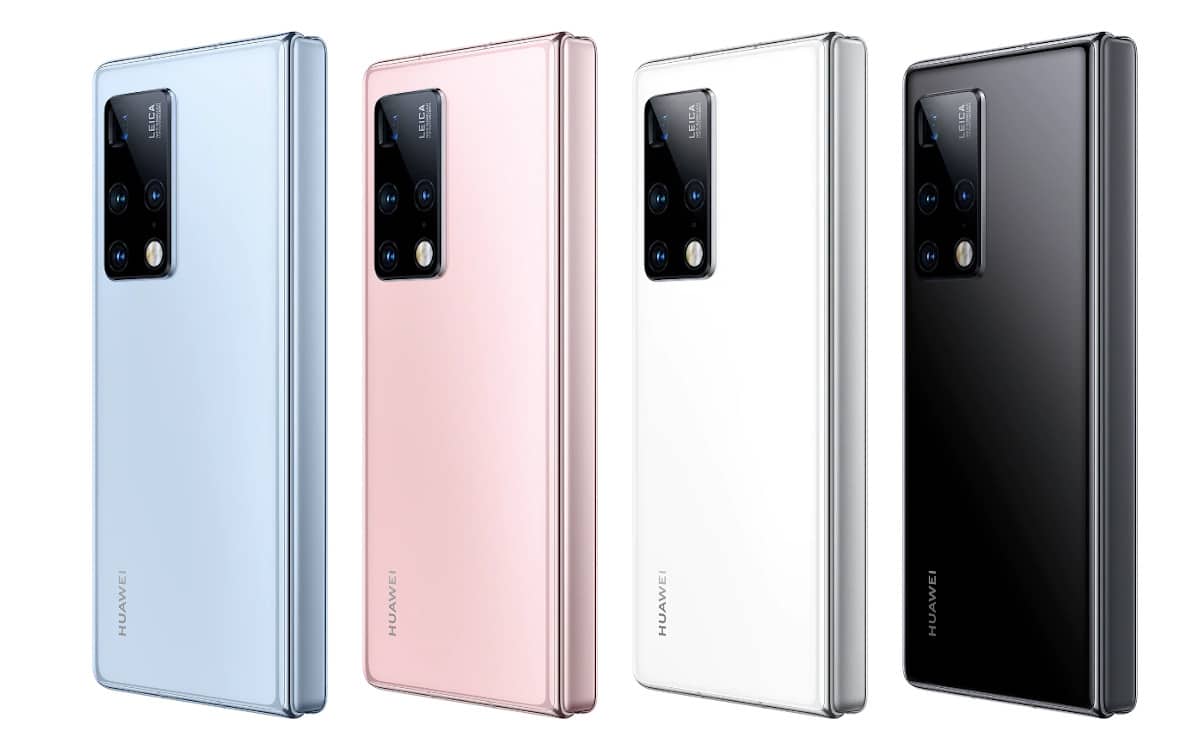 There is also a 16 megapixel sensor for panoramas, instead of a 20 megapixel sensor. The lens opens here at f / 2.2. And autofocus is a measure of contrast. Up front, another change: the 13 megapixel selfie sensor is replaced by a model 16 megapixels with lens opening at f / 2.2. Also note the disappearance of the two time-of-flight cameras (front and rear). All optics are signed Leica, like always. And the Mate X2 shoots video up to 4K at 60 frames per second.

We finally come to the price. The Mate X2 is announced at 17999 yuan in 256 GB version and 18999 yuan in 512 GB version. This corresponds to 2300 euros and 2400 euros approximately, respectively. These prices are up slightly compared to the Mate X and Mate XS, both marketed from 16,999 yuan. These are obviously very high prices. We are very curious to know if Huawei will launch them in the West, without Google services. In the meantime, they will be on sale in China from February 25. Either in three days.