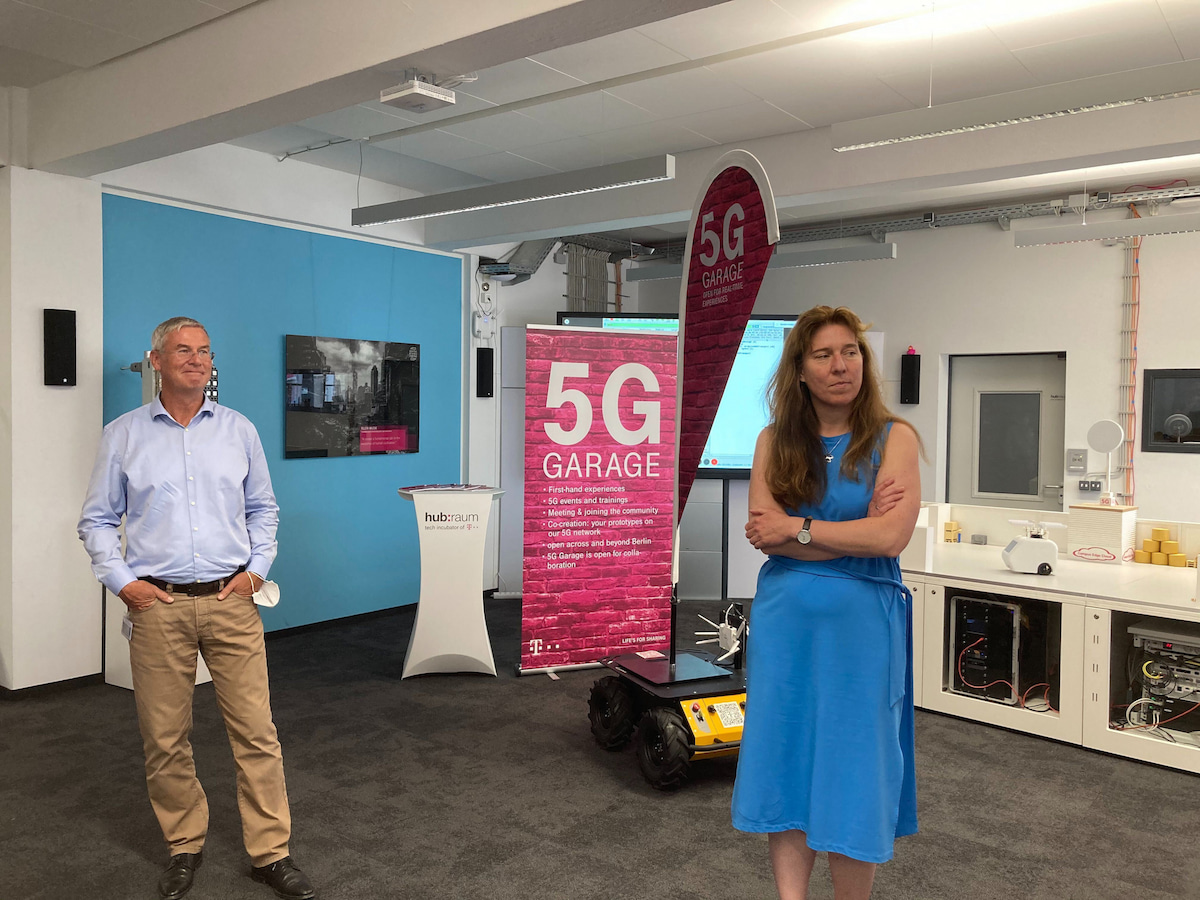 If there is currently talk of 5G, it is usually about the 5G standard NSA (non-stand-alone) with NR (New Radio). NR or New Radio is a new improved transmission / modulation method that is even more economical and stable than 4G (LTE) and is based on the technology known from 4G OFDMA (Orthogonal Frequency Division Multiple Access). If you visualize a wavy line in space, a slightly tilted wave can be transmitted at the same time and another and another – you get much more information (data) into a room.

NSA means that this technology cannot work without a 4G LTE base network. 5G-NSA is – if you will – a kind of 4G ++. 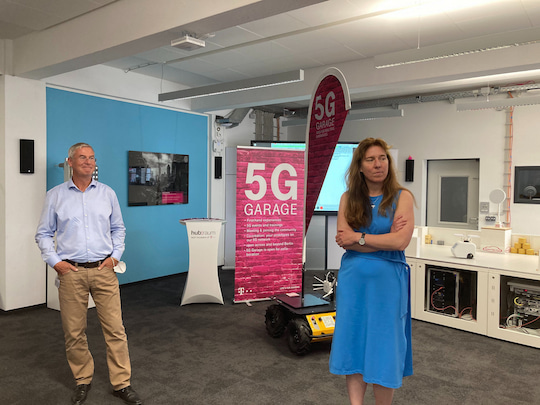 If you take a closer look at the story, you will quickly realize that there should also be a 5G-SA, where SA stands for Stand Alone. So it is “alone” viable and executable. As it is freed from the burdens of the past, 5G-SA is ultimately “faster” with the possible upload and download speeds and the lower possible latencies.

5G-SA is not super brand new, it was recently presented in Aachen, only because of the current health situation hardly anyone could look at it “from outside”.

Today, Telekom offered a few technology journalists an insight into the next level of mobile radio: 5G-SA is currently being tested as a prototype for industry in a demo case. We were able to look at that in the telecommunications research and technology laboratory in the former “Fernmeldeamt 1” in Winterfeldtstrasse in Berlin. 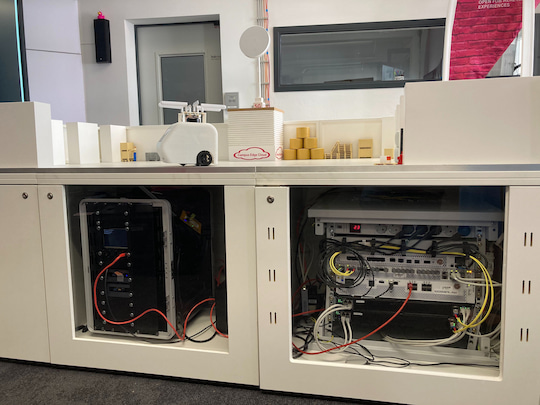 The 5G-controlled car drives at the top, the EDGE cloud computer on the bottom left, and the 5G core network on the right
Photo: Henning Gajek / teltarif.de

It is a table surface on which a robot controlled with 5G drives through a model of a warehouse. Using laser radar, he analyzes the interference objects in the room and has alternative routes calculated in the EDGE cloud. The EDGE process computer, which is in direct contact with the core network (right cabinet) of the campus network, is located under the table in the left cabinet. The active antenna is the white round disk, the size of a smoke detector or WiFi hotspot. 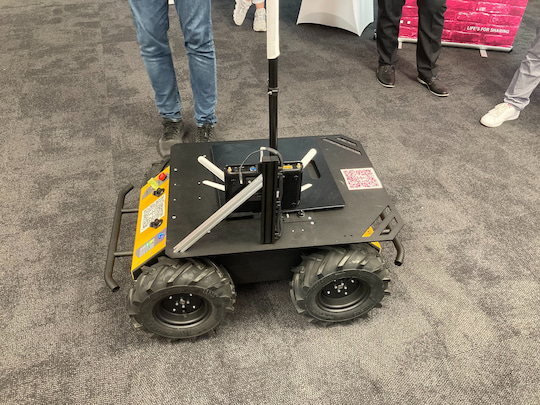 The 5G robot car from Clearpath. The white wings are the MiMo antennas for 3.7 GHz.
Photo: Henning Gajek / teltarif.de

Telekom has dubbed “Campus M” its offer for industrial networks. At Telekom, there is no problem with Vodafone marketing the components already developed with the system supplier Ericsson and Telekom under the term “Redbox”. It is “good that there is an industry standard”, that would increase acceptance and market penetration.

Campus M can either be booked alone or in connection with a public network. There is a high demand for “wireless solutions” from industry. For Telekom, a campus solution does not have to take place on the high frequencies at 3.6 or 3.7 GHz. In the case of large company areas, it might make more sense to roll out LTE or 5G on lower frequencies, which can achieve a higher range than on the much-quoted 3.7-3.8 GHz. 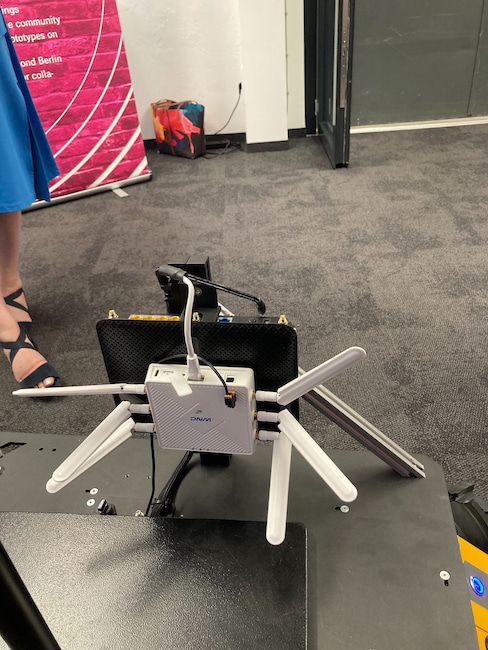 The 5G-SA modem with 6 antennas is still a prototype.
Photo: Henning Gajek / teltarif.de

The German Federal Network Agency has already allocated 50 industrial frequencies in Germany, reports Antje Williams – Senior Vice President 5G Campus Networks. At the customer’s request, Telekom can also supply a turnkey campus network on the campus frequencies allocated to the company between 3.7 and 3.8 GHz. Similar to Vodafone, this can either only run on the exclusive frequencies and be hermetically sealed off from the outside, but there can also be a connection to the outside.

Uwe Horn, Director Pre-Sales Industry Connect from Ericsson, demonstrated his test case for the first time in AC. The radio is on a 3.7 GHz test frequency from Telekom with a prototype that essentially consists of two components: on the right the core part of the 5G-SA network and on the left the EDGE computer that is connected as close as possible to the core should be. 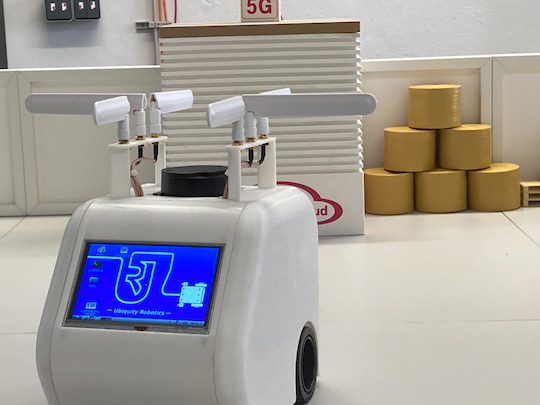 The robot car in the model. It is controlled by the two drive wheels, the third leg is a rolling ball. The route and any obstacles are calculated in the EDGE cloud.
Photo: Henning Gajek / teltarif.de

If you order a campus network, the combination of 4G / 5G NSA is currently being delivered “as standard”. Currently there is the problem that there are hardly any industrial end devices for 5G-NSA, for 5G-SA there is still nothing at all for end devices, except prototypes and development samples. 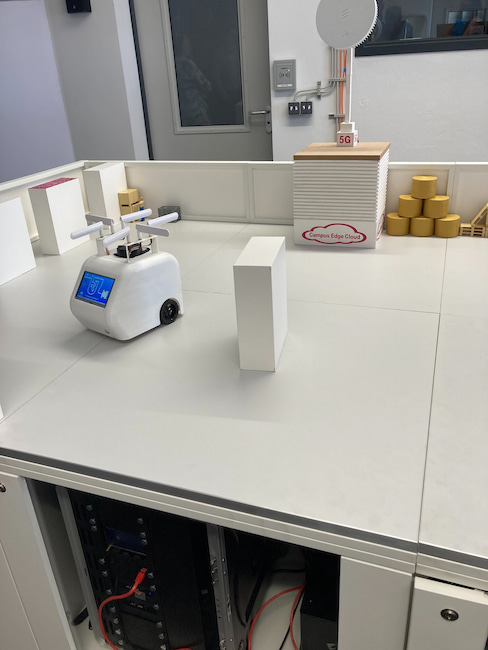 Even if unexpected obstacles arise, the robot trolley notifies and receives a new route from the network.
Photo: Henning Gajek / teltarif.de

The most interesting approach at the moment is automatic transport vehicles, called ATV (Autonomous Transport Vehicle) in jargon. One company is EK Automation in Hamburg, which works closely with “Jungheinrich”, a manufacturer of forklifts and conveyor belts). At Osram (the lamp manufacturer) an Insystems car is running. A robot from ClearPath was selected for the test case in Berlin.

So far, the industry has controlled its vehicles and devices via WLAN. However, if there are many devices in a cell, it becomes unstable and the WLAN cell is overloaded. Coordination of vehicles and equipment quickly becomes impossible. This is where 4G or 5G come into play, which is much more stable. Telekom has developed partnerships with various manufacturers, for example with Endres & Hauser, a specialist for sensors and measurement technology in industry. At the moment, many companies are “in between”. The data is collected via WLAN dongles, WLAN routers are “everywhere” in the factory, but this is not stable.

Williams: The industry wants security and reliability and is therefore interested in 5G.

The day will come when 5G-SA is also available for “civil customers”, but it will take a while. The public 5G is currently being expanded with 5G NSA.

Updates are still required for both the Samsung Galaxy S20 and the OnePlus 8 before they can use the current 5G frequencies at 2100 or at 700/800 MHz. These updates have been delayed. Devices from Xiaomi such as the Mi 10 5G Lite could also play in this league, but require an activation, which the network operator would have to “request”, as Xiaomi informed us on request. Certainly further updates are necessary.

5G pioneering customers need time, patience and have to get current information and update more than regularly.