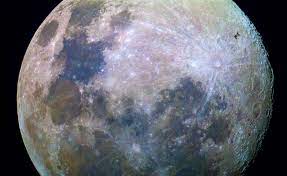 Every Friday, the TechWorld and AstroMiniBR bring together five relevant and fun astronomical trivia produced by Twitter profile contributors to disseminate knowledge of this science.

Did you know that the Moon always shows us its same face? ??
Yeah, we never see the other side!

This is because it is gravitationally bound to Earth by tidal forces.

One of the most common questions for astronomy enthusiasts is: if the moon rotates, why do we never see its other side? In fact, our natural satellite has, in addition to the translation movement around the Earth (and, consequently, also around the Sun), the rotation movement, in which it rotates around its own axis.

However, we always see the same face of the Moon because of a phenomenon known as synchronized rotation, quite common among two-body systems in the Universe, in which the orbital period of the object that is in orbit (in this case, the Moon) is equal to its period of rotation around the main object (the Earth) and, therefore, it always presents the face of the same hemisphere. Thanks to technology and lunar space missions, probes like the Lunar Reconnaissance Orbiter (LRO) from NASA, which is currently in orbit around the Moon, bring us high definition images of just like this one!

#2: “The nitrogen in our DNA, the calcium in our teeth, the iron in our blood…”

Do you know where the Gold medal of Italo comes from?!

From catastrophic events in the Universe, such as the explosive death of high-mass stars ??#AstroMiniBR #JogosOlimpicos pic.twitter.com/fYdSqIGngY

How do chemical elements arise? A good part of the total amount of hydrogen and some other light elements, like helium, were created in the first moments after the beginning of the Universe, in the Big Bang. Over millions of years, these atoms were agglomerating due to gravitational attraction until reaching the point where the first stars were formed. Stars, in turn, are powered by a process called nuclear fusion, in which two atomic nuclei fuse to give rise to a new element.

For much of the time, the main fuel is precisely hydrogen, which fuses into helium atoms and, as these are depleted, the star fuses heavier atoms, until it reaches iron. Elements heavier than iron, like gold, are forged when massive stars die, in one of the most energetic events in the universe: supernovae!

#3: The Solar System in Ultraviolet!

Although our vision is restricted to the small band of the electromagnetic spectrum known as visible light, many telescopes are equipped with instruments and filters that make them able to observe the universe in bands that are invisible to our eyes, such as microwaves, the waves of radio, infrared, ultraviolet and even X-rays.

The great advantage of studying the universe in these ranges is to detect structures and radiation sources that we cannot do directly. Ultraviolet observations, for example, are excellent at checking the demarcations between different layers in the atmospheres of gaseous planets such as Jupiter and Saturn, and are also important for detecting the different chemical compositions of the material that make up their rings.

#4: The birth of a moon outside the Solar System!

Using the ALMA radio telescope, astronomers observe for the first time evidence of a moon-forming disk around an extrasolar planet!#AstroMiniBR #AstroNoticia

Speaking of other bands of the electromagnetic spectrum… recently the ALMA radio telescope (Large Millimeter/Submillimeter Array Atacama), located in the Atacama Desert in Chile, detected an unprecedented phenomenon for our eyes: the emergence of an exomoon, that is, the birth of a moon orbiting a planet outside the Solar System! Although more than 4,000 planets outside the Solar System have been discovered so far (and that number is increasing rapidly), this was the first time that the appearance of a moon on a planet’s disk has been detected with sufficient clarity.

On this disc, it is possible to see the planet in its early stages of formation and, next to it, a tiny structure, identifiable as the exomoon! This is direct evidence that supports the main model of planet formation, including those belonging to the System Solar. According to this model, planets form through the accumulation of matter that collapses due to the action of gravity and eventually form larger and larger structures until they take on a spherical shape and dominate its orbit around the star.

#5: How technological can an airplane be?

A telescope operating inside a moving plane?

The telescope has several systems to compensate for aircraft vibration and movement#AstroMiniBR pic.twitter.com/WsE1dEHWjR

Yes, NASA has a telescope that flies! Known as SOFIA, the Stratospheric Observatory for Infrared Astronomy (Stratospheric Observatory For Infrared Astronomy) is a Boeing 747 aircraft modified to support a 2.7 meter reflecting telescope and to study the universe in infrared. This includes studying the chemical composition of planetary and comet atmospheres and surfaces, studying the physics and chemistry of the interstellar medium, and exploring how celestial objects such as stars and asteroids form.

But why do all this inside an airplane? The Earth’s atmosphere is a great filter for electromagnetic waves in the infrared, so when flying in the stratosphere at an altitude of approximately 12 kilometers, the SOFIA telescope plane is above 99% of the portion of the atmosphere that blocks this radiation, allowing for astronomers to observe the Solar System and the rest of the universe unencumbered by the limitation imposed by this natural filter!