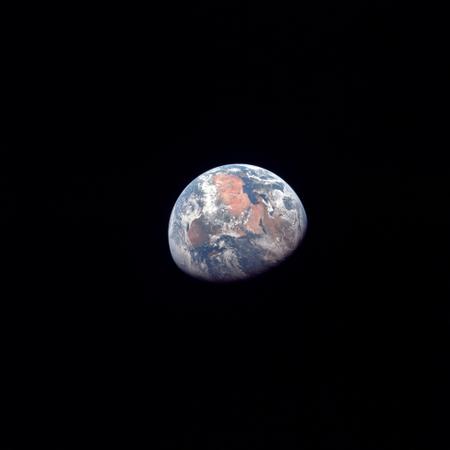 Image of Earth taken by the crew of Apollo 11 exactly 52 years ago, on their way to the Moon.

At that moment they were already 210 thousand km from us.

July 17, 1969 was the date when man first stepped on a celestial body beyond Earth. It was humanity’s first step towards the stars, and this only 63 years after Santos Dumont conquered our skies for the first time. This year marks 52 years of this historic milestone for humanity. We are advancing faster and faster! Despite the excitement that these achievements bring, we must always remember that Earth is just a small blue dot in the Universe and there is no Planet B for us. Conquering the stars by taking care of our home is the only way to succeed for the future of humanity.

#2: What are the largest moons in the Solar System?

Historical curiosity: being the first person in the world to have observed Saturn through a telescope in 1610, and because of the low resolving power of his equipment, Galileo Galilei thought that the planet’s rings were Moons or “arms” on each side of it. !#AstroMiniBR pic.twitter.com/vEuKJMV5wW

Can you imagine what it was like to discover Saturn’s rings? We are talking about the first time an object was observed in this way. It certainly generated a lot of confusion. No wonder that Galileo Galilei, the first to observe this structure, considered at first that they would be moons, because this type of object was known here on Earth. As the observations continued, it was understood that these were rings! In addition, other gaseous planets also have rings, such as Uranus and Neptune.

Apparently NASA engineers and engineers have made significant progress in replacing hardware that had recently failed the Hubble Space Telescope (our darling of all)!

Hubble? Are you okay?

After diagnosing the devices on board, scientists were able to make the space telescope work again. The observatory obtained these images after retrieval.#AstroMiniBR #AstroNoticias @NASAHubble pic.twitter.com/4vzzJaYYFC

Great news! Despite a tense month, NASA engineers and scientists were finally able to identify the Hubble Space Telescope problem and effectively fix it! This is possible because the Hubble telescope is relatively close to Earth, so repair missions are possible and constant, no wonder it is steady and strong after more than 30 years of cutting-edge work! Did you know that when Hubble was launched it was “short-sighted”? An aberration in the mirrors caused the first images to be blurry. After a repair trip, the telescope began to live up to its promises and to this day it continues to amaze us with images of the secrets of the Universe.

(Exo)rocky planets can lose atmosphere and turn into pedrones by:

– Lack of protection against stellar winds (lack of magnetic field).
– Proximity to the star.
– Be a little one.
– Be more beaten than a bad guy in Gotham city.#AstrominiBR @AstroMiniBR

The Earth has an enveloping atmosphere that guarantees our existence. Is she the only one? Definitely not, other rocky planets do too. Our neighbors are two extreme examples: Venus has an extremely dense atmosphere that has pushed the planet into a runaway greenhouse effect (a small taste of what can happen here). On the other side we have Mars, which has a super rarefied atmosphere, almost non-existent. So, how can an (exo)planet get “naked”? There are several factors: too little gravity to hold the atmosphere, a weak magnetic field that cannot protect it, being too close to the star, and receiving too much radiation. Well, I’m glad the Earth managed to keep her mantle and we can live here!

#Bonus: Hitching a ride on this comet tail

It was the first mission to land on the surface of a comet, in addition to having detected for the first time in a comet an amino acid (glycine)#AstroMiniBR pic.twitter.com/nPkEHPTLaZ

These are incredible images taken by the Rosetta spacecraft in 2016, directly from the surface of comet 67P/Churyumov–Gerasimenko. That’s right, the probe traveled thousands of kilometers, landed on a comet that was traveling through the Solar System and did in situ studies! The entire process was extremely complicated, of course, and brought many scientific results. One of them was the possible detection of organic material. Scientists from the European Space Agency (ESA) claim that microbial life may have inhabited the comet in the past! Is panspermia a reality? What origin of Life anyway?

Did you like this week’s trivia? Keep an eye on #AstroMiniBR so you don’t miss any!