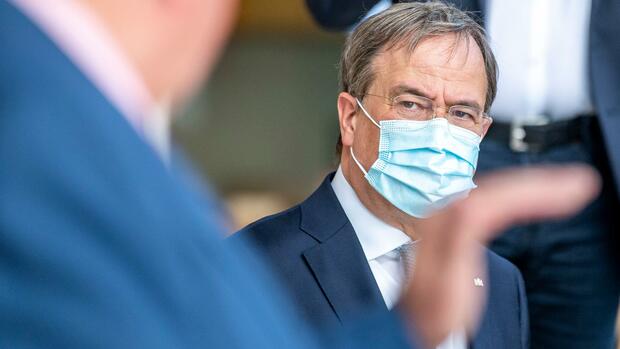 Berlin Armin Laschet reports from Gütersloh. The Prime Minister of North Rhine-Westphalia came to the East Westphalian district on Sunday to find out more about the Corona outbreak at the Tönnies meat factory.

After a meeting of the local crisis team, the CDU politician said that “no significant skip” of the virus from the Tönnies workforce to the population in the area could be determined so far. However, the case assumes an “enormous pandemic risk”. “We cannot rule out a comprehensive lockdown.”

It is not the first corona crisis mission for Laschet: In late February, he hurried to Heinsberg after the virus had spread there after a carnival session. The district on the Dutch border is considered to be the first major hotspot in the Federal Republic, a few weeks later politics largely shut down social and economic life throughout Germany.

This scenario does not currently loom. Laschet says: “What is happening is clearly localizable.” But he also says that it is the “biggest, never-before-seen infection event in North Rhine-Westphalia”.

The outbreak at Tönnies has been the worst setback in the fight against the pandemic since the federal government and states gradually eased the measures against Corona at the end of April. The SPD state chairman of NRW, Sebastian Hartmann, sees a joint responsibility of the black and yellow state government in Düsseldorf.

“The Tönnies disaster is a failure at various points: company boss Tönnies and head of government Laschet were both responsible. Neither acted at all or acted too late, ”Hartmann told the Handelsblatt. That is why Laschet’s government now has to put up with many questions. “We want to know where she was and why nothing has been done.”

The location of the family business in Rheda-Wiedenbrück is Germany’s largest meat company. The Corona outbreak was announced last Wednesday, the number of infected was 1331 on Sunday.

According to the Gütersloh district, the investigation of the employees for the virus has now been completed, and almost all of the results of the 6139 tests are available. With 4568 employees, the result was negative. The district’s clinics are currently treating 21 patients for Covid 19 disease. Five of the six intensive care cases work at Tönnies.

Temporary workers in the slaughter area from Central and Eastern Europe are particularly affected. At the headquarters in Rheda-Wiedenbrück, every second employee is contracted through a subcontractor. Laschet said that the outbreak at Tönnies also poses such a high risk because the employees are housed in 1,300 different houses in Gütersloh and neighboring counties.

The Prime Minister still relies on “targeted measures” to interrupt the infection chains. Area-wide restrictions on public life should be avoided – although the district currently significantly exceeds the limit of 50 corona infections agreed per federal and state within one week per 100,000 inhabitants.
The health authorities in NRW, on the other hand, rely on mass tests in which soldiers from the Bundeswehr also support. “The tests are the key to success,” said Laschet. Now it is crucial that the samples are evaluated quickly and the contacts of infected people are tracked. All employees at the Rheda-Wiedenbrück site have to go into quarantine at home, the factory was closed for two weeks.

Surgical measures instead of general lockdown

Three hundred police officers are deployed to enforce compliance. The city of Verl had set up a quarantine zone around apartment buildings on Saturday, in which Tönnies contract workers are accommodated. All other residents are also no longer allowed to leave the area sealed off with fences. Almost 670 people live in the affected streets.

Surgical measures instead of general lockdown – this is the new strategy in the fight against the coronavirus. The federal and state governments had agreed to increase the personnel of the health authorities for the follow-up of contacts. In addition, Federal Minister of Health Jens Spahn (CDU) stipulated that the corona tests would be expanded significantly and that the health insurance companies would also cover the costs for people without symptoms of illness.

For example, residents in old people’s homes and nursing homes should be tested regularly. If a corona case occurs in a facility, but also in daycare centers or schools, the health authorities can also order mass tests.

Last week, the Corona warning app was launched, which alerts smartphone users when they are near infected people. The app has been downloaded more than ten million times. The goal is to quickly control a local outbreak and prevent the virus from spreading throughout Germany.

The area around Gütersloh is now the first large test field whether this strategy works. The infection process is still calm in most areas of Germany. However, the number of new cases registered due to local outbreaks such as Tönnies increased compared to the middle of the month. The Robert Koch Institute (RKI) reported 687 new infections within one day on Sunday.

Confidence in the company damaged

The Tönnies Group is the market leader in Germany with a market share of around 20 percent, ahead of Westfleisch and Vion. In 2019, the slaughtering and cutting group with around 16,500 employees worldwide achieved record sales of 7.3 billion euros, an increase of ten percent.

The Corona outbreak not only paralyzes production. He is also a PR disaster for the company. The anger of the citizens is great – not least because the district of Gütersloh had to close the schools and daycare centers that had just opened.

Green party leader Anton Hofreiter called the supermarket chains to boycott Tönnies products. “The behavior of the meat barons, who only rely on profit and think they don’t have to follow any rules, is a scandal,” said Hofreiter of the “Bild am Sonntag”.

The authorities in Gütersloh complain that Tönnies was reluctant to provide the lists of employees needed for the mass tests and quarantine. “The trust we place in Tönnies is zero,” said Thomas Kuhlbusch, head of the crisis management team. Company director Clemens Tönnies rejected the allegations and referred to “data protection problems” that exist when storing the addresses of contract workers.

The 64-year-old promised to do everything possible to contain the outbreak. “I am responsible,” he said on Saturday. “We won’t go on like this. We will change this industry. “

Clemens Tönnies makes a statement: “We believed we were doing everything right”

However, the realignment of the industry is no longer in the hands of entrepreneurs like Tönnies. Deputy CDU chairwoman Silvia Breher told Handelsblatt: “We have now seen several corona outbreaks in the meat industry. It is completely clear to me that we are facing significant changes in the meat industry. “More order, better working conditions and stronger hygiene measures are” central “, those responsible should be held accountable.

The federal government wants to take legislative action. “Meat is too cheap,” said Federal Minister of Agriculture Julia Klöckner. The CDU politician has in mind an animal welfare tax that could be added to meat, sausages and other items. In addition, the corona outbreaks in slaughterhouses are placing increasing emphasis on contract workers.

According to the Federal Ministry of Labor, between 50 and 80 percent of the employees in large factories are contract workers. You are not employed by the company itself, but by subcontractors who take on orders for slaughtering and cutting. Often there are employees from Eastern and South-Eastern Europe who are sometimes employed by one company and then another. Minister of Labor Hubertus Heil (SPD) criticizes that this contract construction with sub-sub-subcontractor chains means that responsibility for grievances can always be postponed.

The Federal Government is therefore planning to ban contracts for work in the meat industry; Heil plans to submit a draft law in the summer. “For years, unions have been pointing to exploitation, social dumping, lousy working and living conditions and poor wages,” DGB board member Anja Piel told Handelsblatt. “Now that the lockdown is being discussed for an entire region, politics and companies can no longer close their eyes.”

More: The corona crisis reveals the dark side of the meat industry. A system change is overdue there – and an intervention by the state, comments Handelsblatt editor Katrin Terpitz.