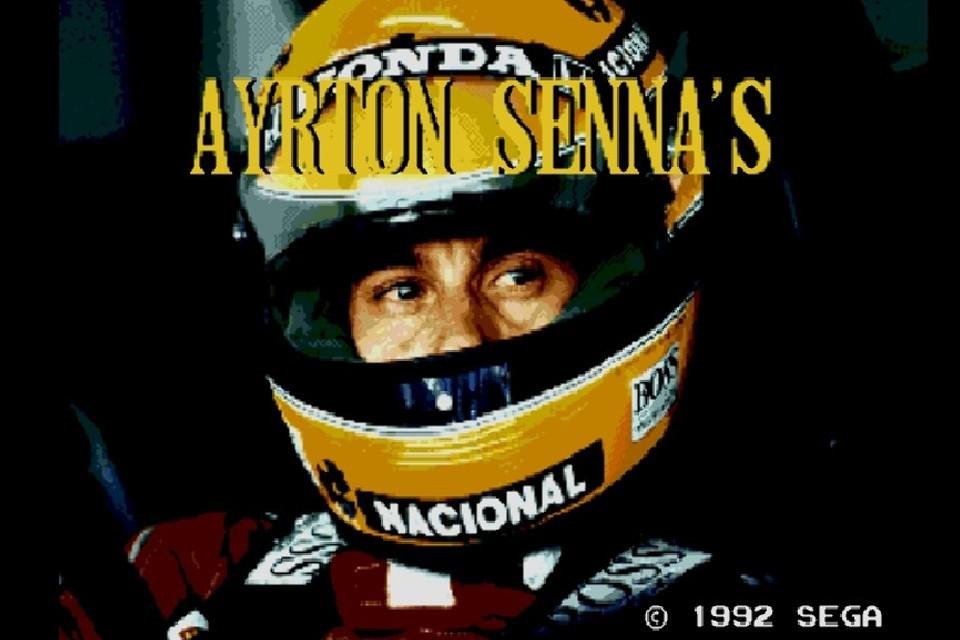 The Mega Drive is one of the most beloved consoles by the Brazilian public, largely thanks to the excellent work that Tectoy did in the country promoting SEGA products! With great platform, RPG and fighting games, it is clear that racing was also a very well represented genre in this iconic 16-bit console.

Today we’re going to celebrate 10 of the most iconic games on the system, so buckle up, blow out the cartridges and let’s speed up together! Remembering that the list is in alphabetical order, not quality, so all these games deserve at least a little bit of your attention:

This is a game that was born a winner, with everything tailored to please Brazilians. With one of the biggest heroes of the national sport giving the game its name, the sequel to the already great Super Monaco GP counted on the supervision of Ayrton himself to polish its gameplay! The coolest thing here is that the project was born on the initiative of Tectoy itself, who sought out SEGA in Japan, with whom he had great ties, recommending the development of the project.

Although the look and proposal are not that different from Out Run at first sight, Lotus Turbo Challenge was released by EA and managed to stand out on the console thanks to some interesting features, such as the possibility to run in split screen, choose between automatic or manual transmission, and a good variety of scenarios!

SEGA had been building a very strong partnership with EA during the 16-bit generation, and the producer took the opportunity to launch its own line of racing games in 1994. Just like the franchise Madden, the idea was to take advantage of Mario Andretti’s name to promote three different types of race between Stock Car, Indy and Dirt. The game’s success eventually led its developers to work on the franchise. NASCAR just after.

One of the greatest attestations of the greatness of Out Run it’s how it managed to stay relevant across generations and hardware. Originally released in 1986, the arcade game made by the legendary Yu Suzuki has conquered fans on computers, laptops, in short, everywhere you can imagine. There’s no shortage of attractions, from the timeless soundtrack by Hiroshi Kawaguchi to the possibility to travel the roads in the route you want with impeccable controls!

At the end of 1992 Electronic Arts brought to the Mega Drive one of its best exclusive games, the electrifying Road Rash II! As the name suggests, the idea here was to take everything that its predecessor had the best, such as fun combat and high-speed racing with the most realistic graphics of the time, and tweak things with the addition of a mode for two players, more vehicles and even more sense of speed. Even those who don’t stack so much with racing games should try it!

When Blizzard Entertainment was still called Silicon & Synapse, it released one of the greatest racing classics on consoles! Also initially only available for the Super Nintendo and then ported a year later to the Mega Drive, Rock n’ Roll Racing the highlight, of course, was a licensed soundtrack with some of the biggest hits of the genre. Combined with explosive combat and a fun system to tune futuristic vehicles, the game has become a beloved icon to this day!

This game is special because it is part of the first wave of Mega Drive releases, already serving to give the public a good idea of ​​how powerful the console was! Also the product of the creative mind of genius Yu Suzuki, the arcade focused on motorcycle racing was very fun and electrifying. Interestingly, you can play it in SEGA arcades in games like Yakuza 0 e Yakuza 6!

Don’t be fooled by the tiny car models on the screen: this is a great racing game and it’s very good in practically all of its various ports, including the Mega Drive version. The fun of racing here is trying to deal with the many slopes of the tracks, always taking care to observe all the cars on the map at the same time.

Despite the franchise Top Gear — one of the most beloved by Brazilian players — to be most remembered for its chapters on the Super Nintendo, it also arrived on the Mega Drive, albeit with less fanfare. Instead of being published by Kemco, here the game arrived by the hands of Vic Tokai. Strangely, this edition does not include fuel management mechanics which, combined with the console’s more limited sound chip, makes many people ignore the port and focus more on the SNES.

By 1992, video games were starting to experiment more seriously with 3D technologies, and Sega AM2 was experimenting with making a racing game with the Model 1 board. As ideas progressed better than expected, the prototype turned out to be a full game well ahead of its time! To be able to run it on the Mega Drive, a new very expensive chip was inserted into the cartridge, which made its sale price rise to 100 dollars at launch!

Did you already know all these 10 racing game? Did we leave any of your favorites off this list? Build your own ranking and chat with us in the comments below!